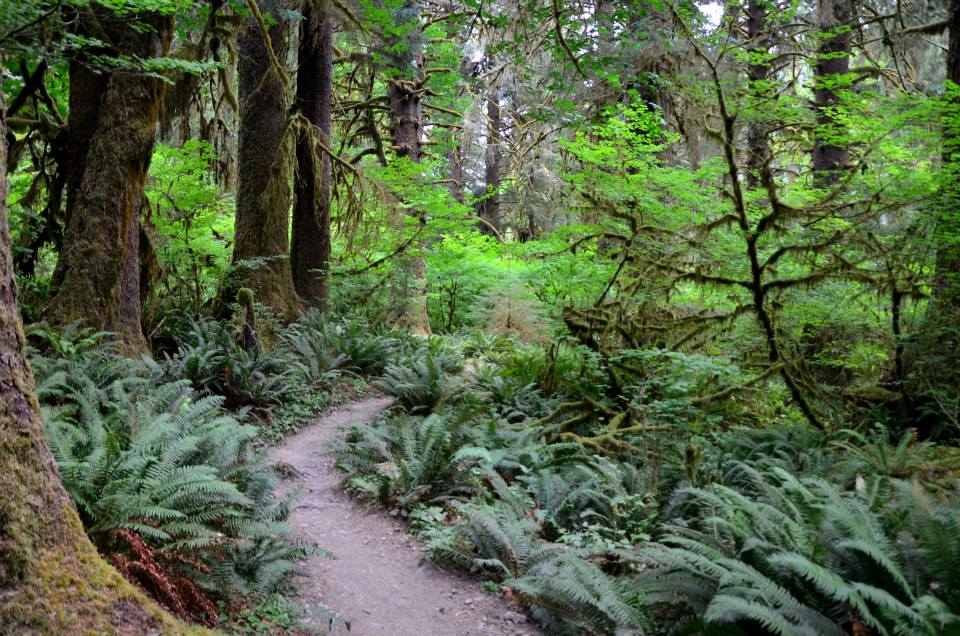 National parks are huge and sometimes you only have a short time to explore them. And when you only have a short time, it can be intimidating to figure out what to do. Olympic National Park is probably the hardest of the parks I have visited to condense down into two days because of how diverse and spread out it is. But, this is what I would do if I only had 48 hours in Olympic National Park.

Olympic National Park is such a great park because it is so varied. I don’t know many other national parks where you can hang out on the beach, hike to a glacier, and explore a rain forest all in one park. But that makes a lot to see with only 48 hours in Olympic National Park, but it can be done. 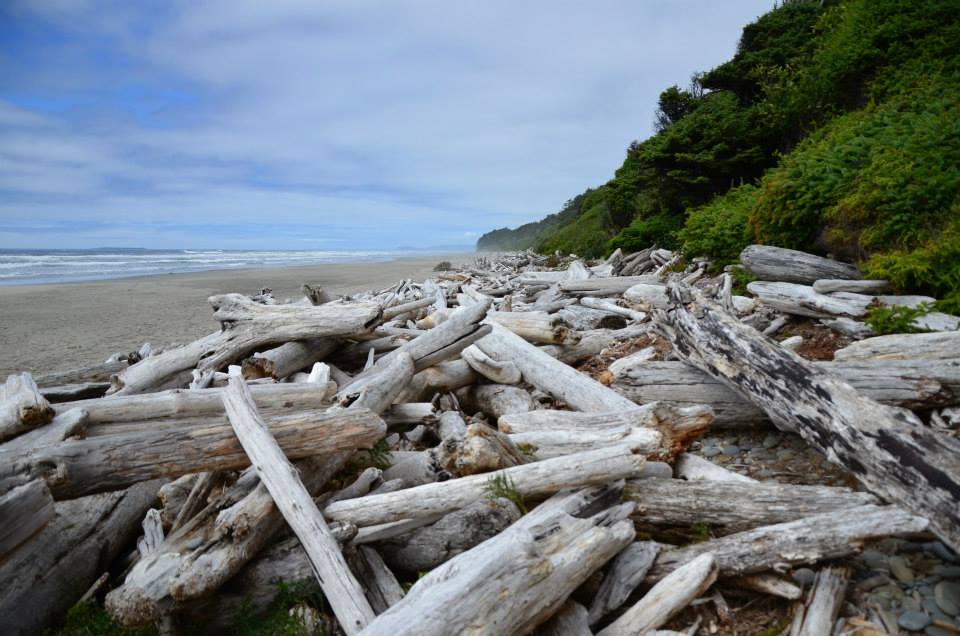 According to Olympic National Park’s website, the three distinct ecosystems make up the park’s nearly one million acres. These ecosystems include the Pacific Ocean, a temperate rain forest, and rugged snow-capped mountains. And with the three ecosystems, an array of wildlife resides at the park. Located a few hours from Seattle, Olympic National Park offers a great taste of the Pacific Northwest. For a detailed trip report about how I spent a week in the park, click here. 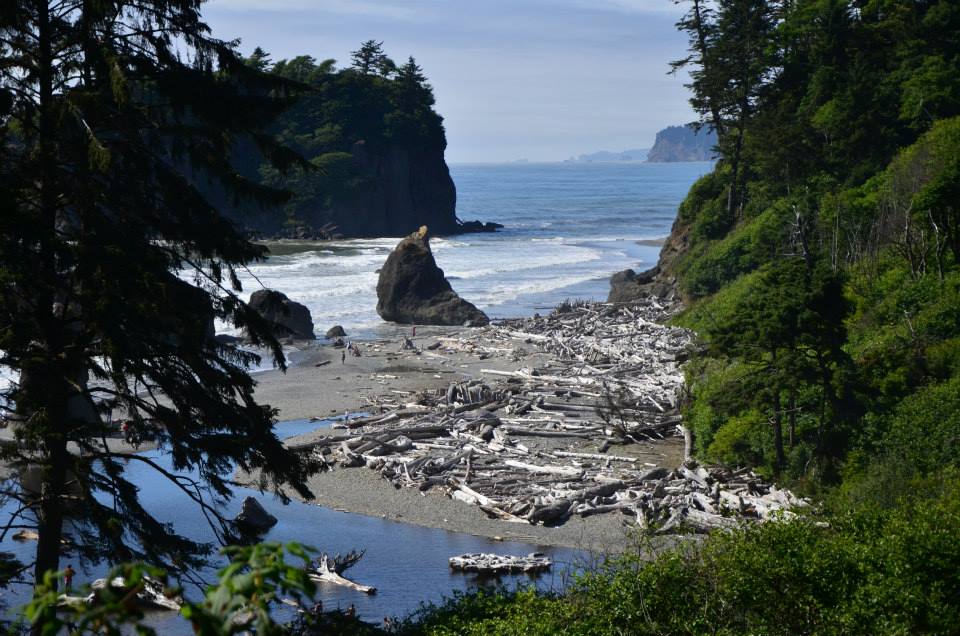 Fortunately if you have 48 hours in Olympic National Park, you can split the beach and the Hoh Rain Forest in day. But more on the rainforest later.

To maximize your beach time, start at Beach 1, just south of Kalaloch Lodge. From there you can drive along Highway 101 for six different beach accesses. The lodge has a great restaurant if you want to have breakfast or lunch there. 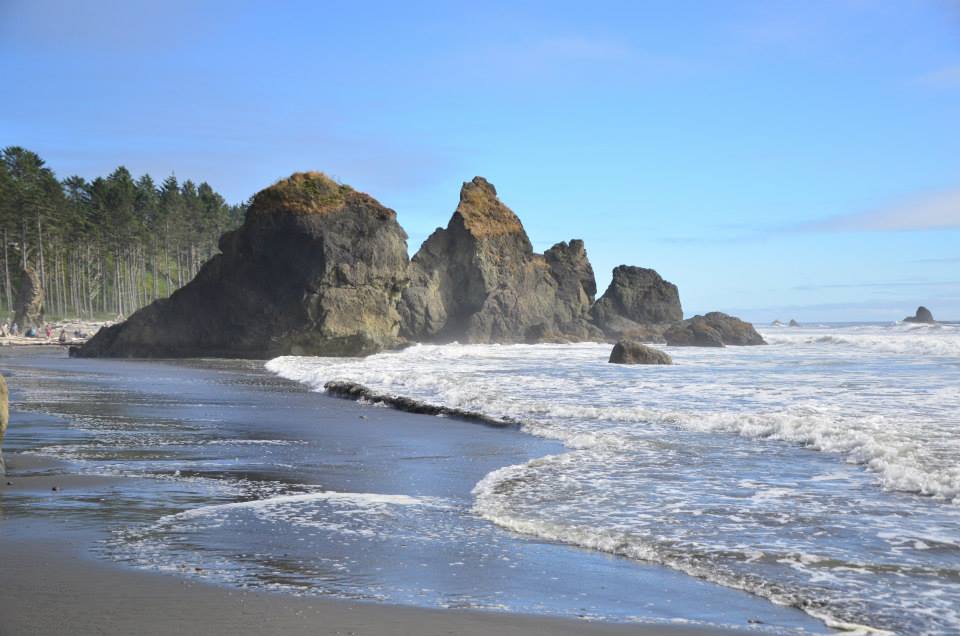 Each access to the beach is named with a number. There is Beach 1 through Beach 4. You can also access the beach at Kalaloch Lodge and at Ruby Beach, before the highway turns west and takes you away from the ocean. 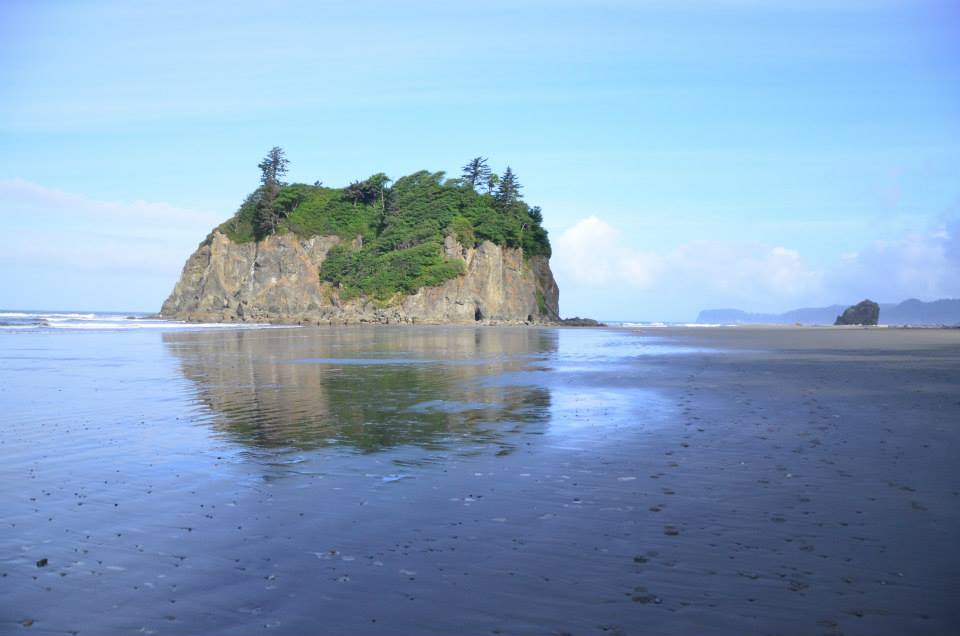 Be sure to check the tide levels. When I visited the park, we explored the beaches at high tide. We then went back to Ruby Beach (my favorite because of the many sea stacks – tall islands just off the shore) to explore at low tide, and the difference is striking.

If you are short on time, I suggest seeing the beach at low tide. That way you can walk out to the sea stacks and see all the creatures that live in the tide pools, like star fish. 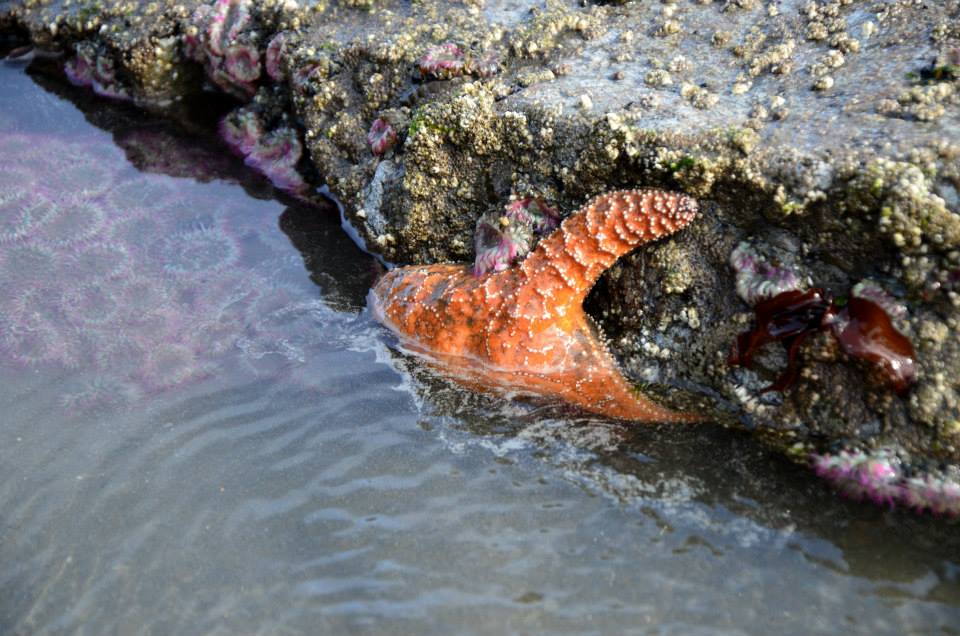 You can check the tide predictions here. When I visited in the park, low tide was in the morning. If low tide is in the morning, I would advise spending the first half of the day on the beach and the second half in the Hoh Rainforest.

From Ruby Beach it is about a 50-minute drive to the Hoh Rain Forest Visitor Center. If you do any hiking in the rain forest and only have 48 hours in Olympic National Park, you’ll want to start your day on the beach early. 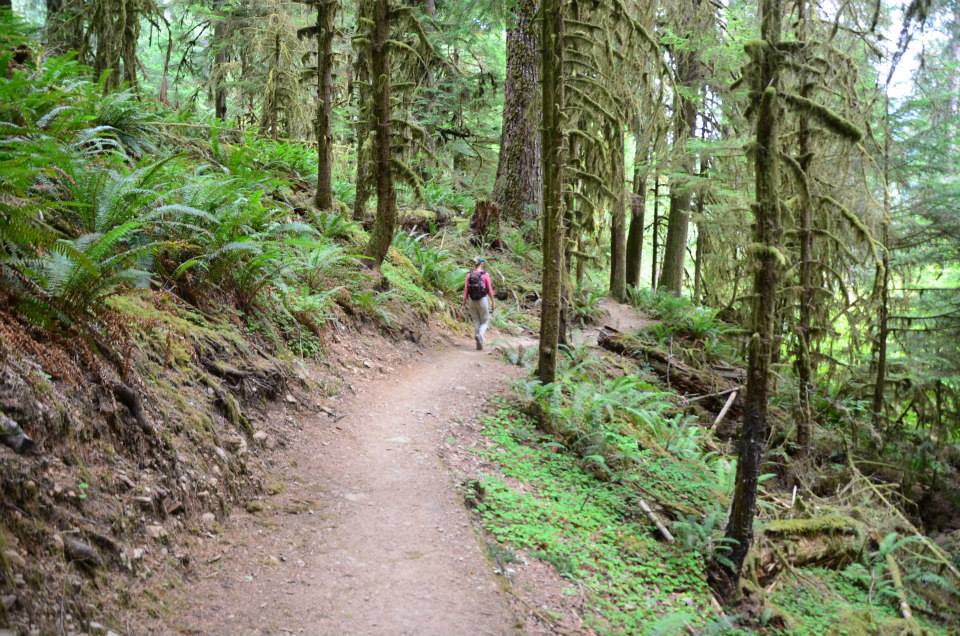 At the Hoh Rain Forest Visitor Center, you can hike two interpretive trails, about a mile long each, and learn about the temperate rain forest, as well as hike as far as you like along the Hoh River Trail. 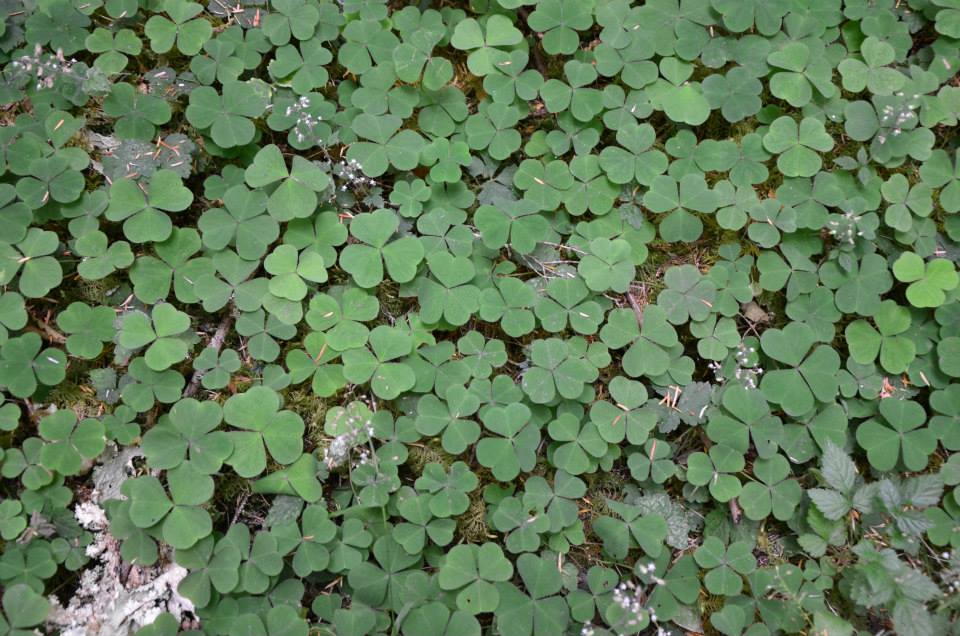 The Hoh River Trail is a really beautiful trail. It takes hikers to Blue Glacier and is 18 miles one way. I hiked along the trail for a few miles before turning around and heading back to the visitor center. 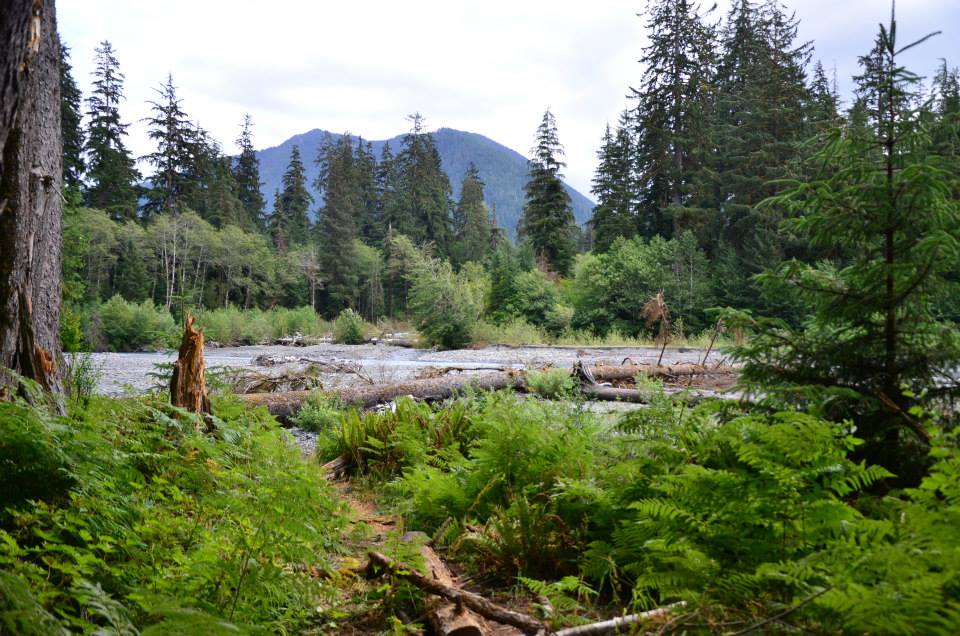 The trail follows the Hoh River and takes you through towering moss-covered trees. This was my first taste of how big the trees can be in the Pacific Northwest. I also loved that everything was so green. It was neat to see the log jams along the river as they eventually made their way to the sea.

It is a two and half hour drive from the Hoh Rain Forest Visitor Center to the Hurricane Ridge Visitor Center. Because the park is spread out, it requires a lot of driving. This is a problem when you only having 48 hours Olympic National Park. 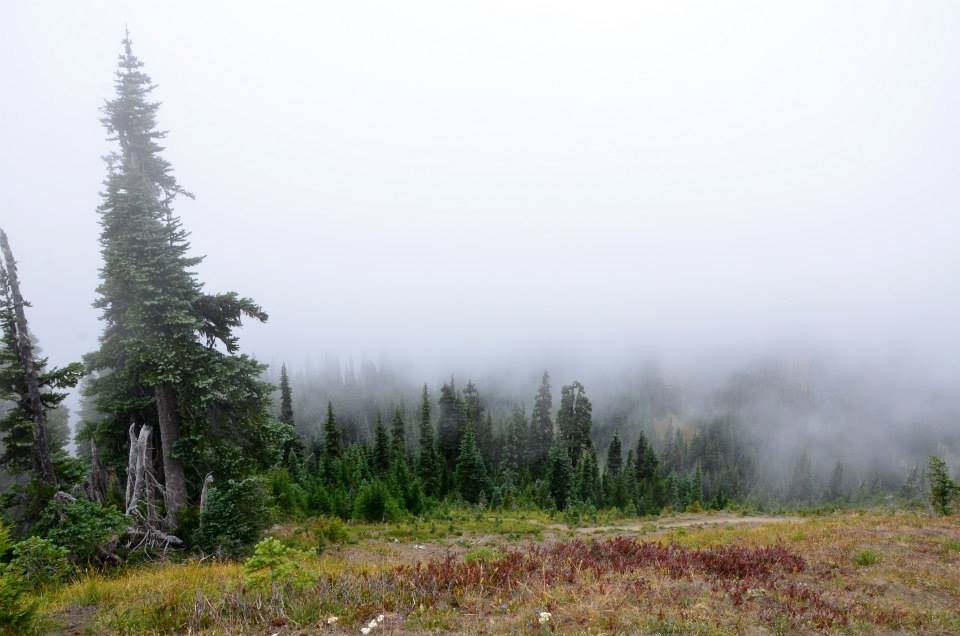 But after seeing the beach and the rain forest, you need to see and experience the rugged mountains.

At an elevation of more than 5,000 feet Hurricane Ridge Visitor Center puts you high into the Olympic Mountains. 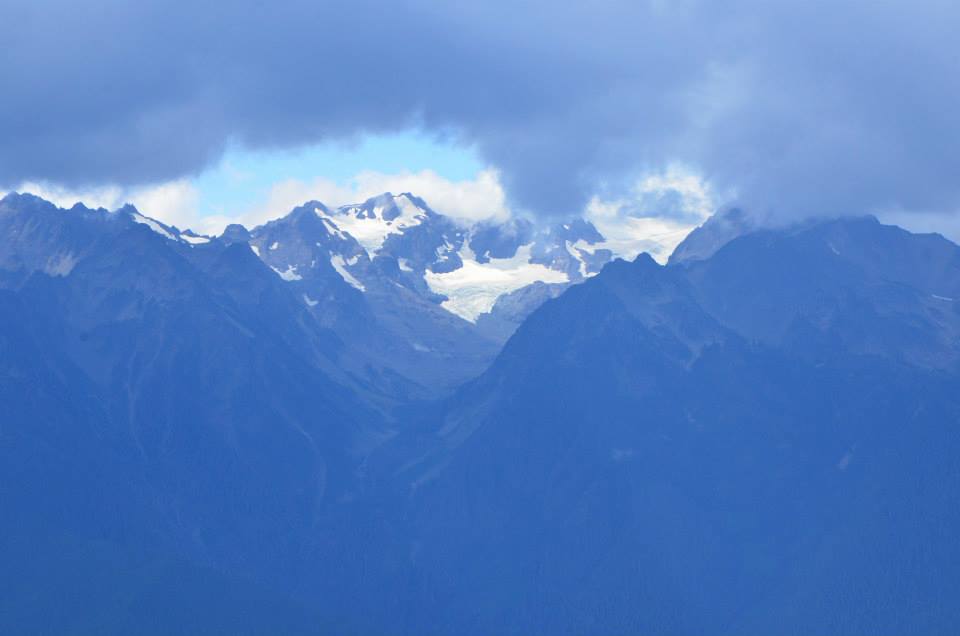 At the visitor center we could see the glaciers and snow-covered peaks of the mountains in the distance. We could definitely feel the temperature change as it was much cooler at the high elevations. From Hurricane Ridge you can see sweeping views of Olympic National Park. 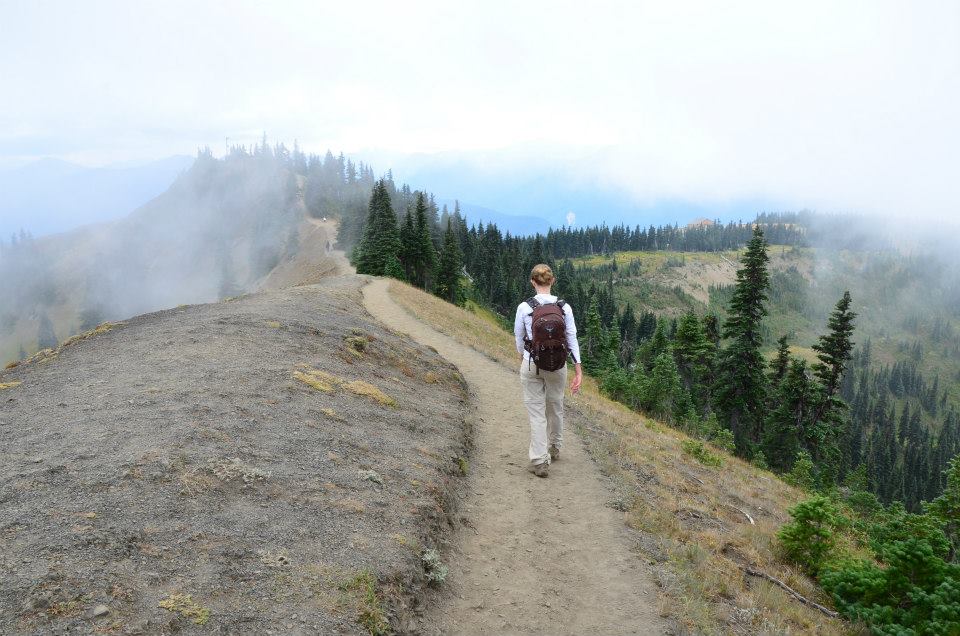 There are numerous hiking trails that range in length between a quarter of a mile one way to eight miles one way. You can chose a trail length that fits best with your time frame. 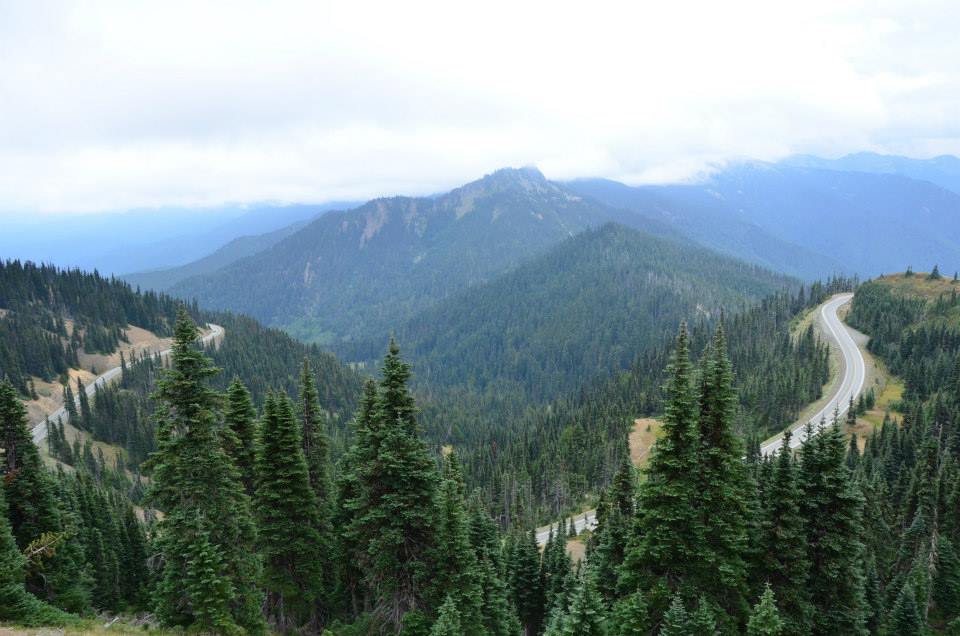 I chose the Klahhane Ridge Trail. This trail is not a loop, so I simply hiked three miles out and back along the trail. It is a very lovely trail that is a stark contrast from the Hoh Rainforest.

Olympic National Park is a large and spread out park. This makes a quick trip difficult because so much time is spent driving from place to place. The way I split it up, I believe is the best way to maximize the minimal time you will have. This way you are able to experience all three ecosystems and enjoy all the park has to offer. However, if you are more interested in one area and do not mind missing another or not spending a great deal of time, you can customize the trip to you tastes. 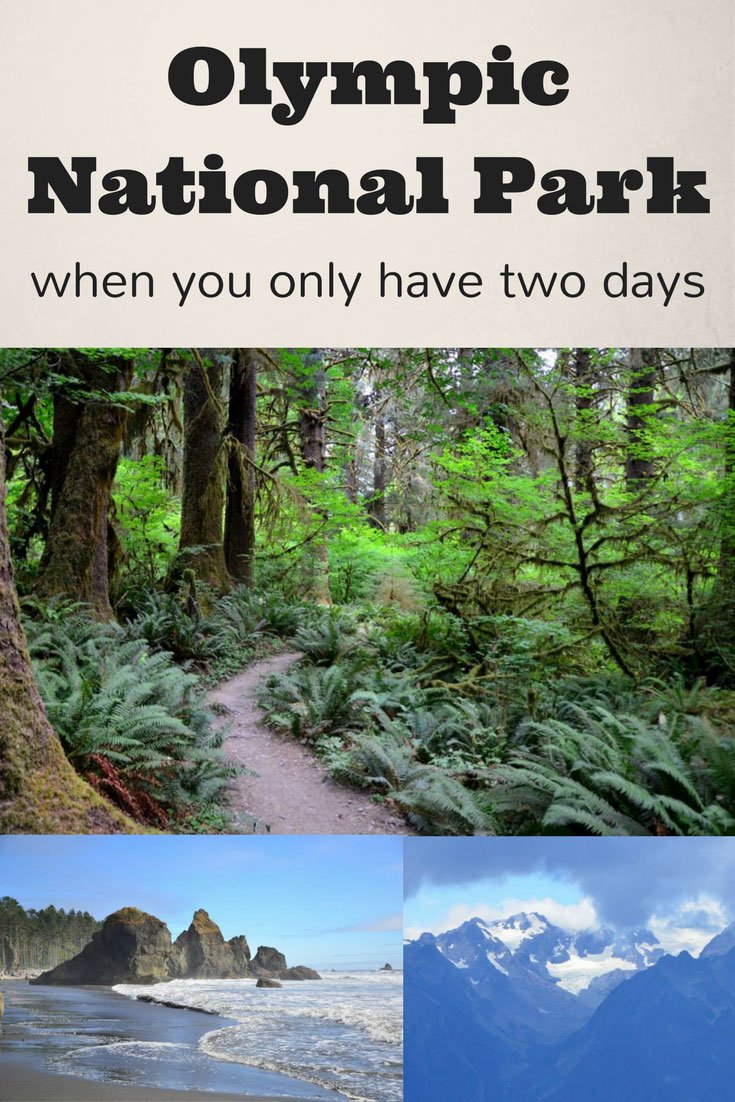