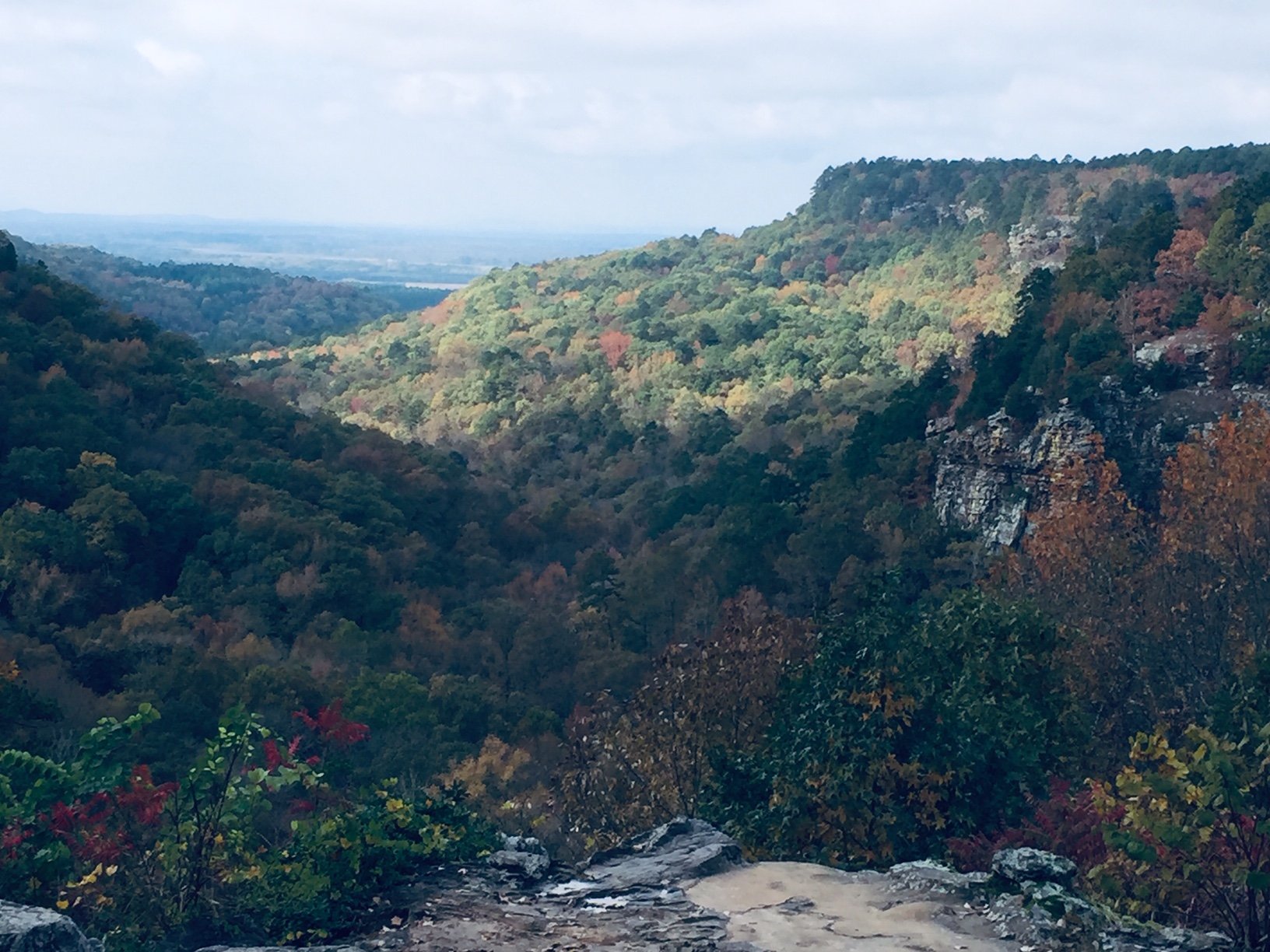 I’m so excited to have Roy on the blog today. Roy is a Texan and like me is a veteran of the newspaper industry. He’s been exploring Arkansas for nearly a year now. Today he tells us about a recent trip where things didn’t go quite as planned, but that was OK.

Plans change. And sometimes they change again. If you can adapt, if you remain flexible, you just might find yourself enjoying yourself in spite of the disruption.

For weeks, I’ve been watching the weather in Arkansas. This is my first year of truly active hiking, and I wanted to enjoy the fall colors in the Ouachita Mountains. But weekend after weekend, rain ruined my plans while cooler weather advanced the pace of the foliage change. 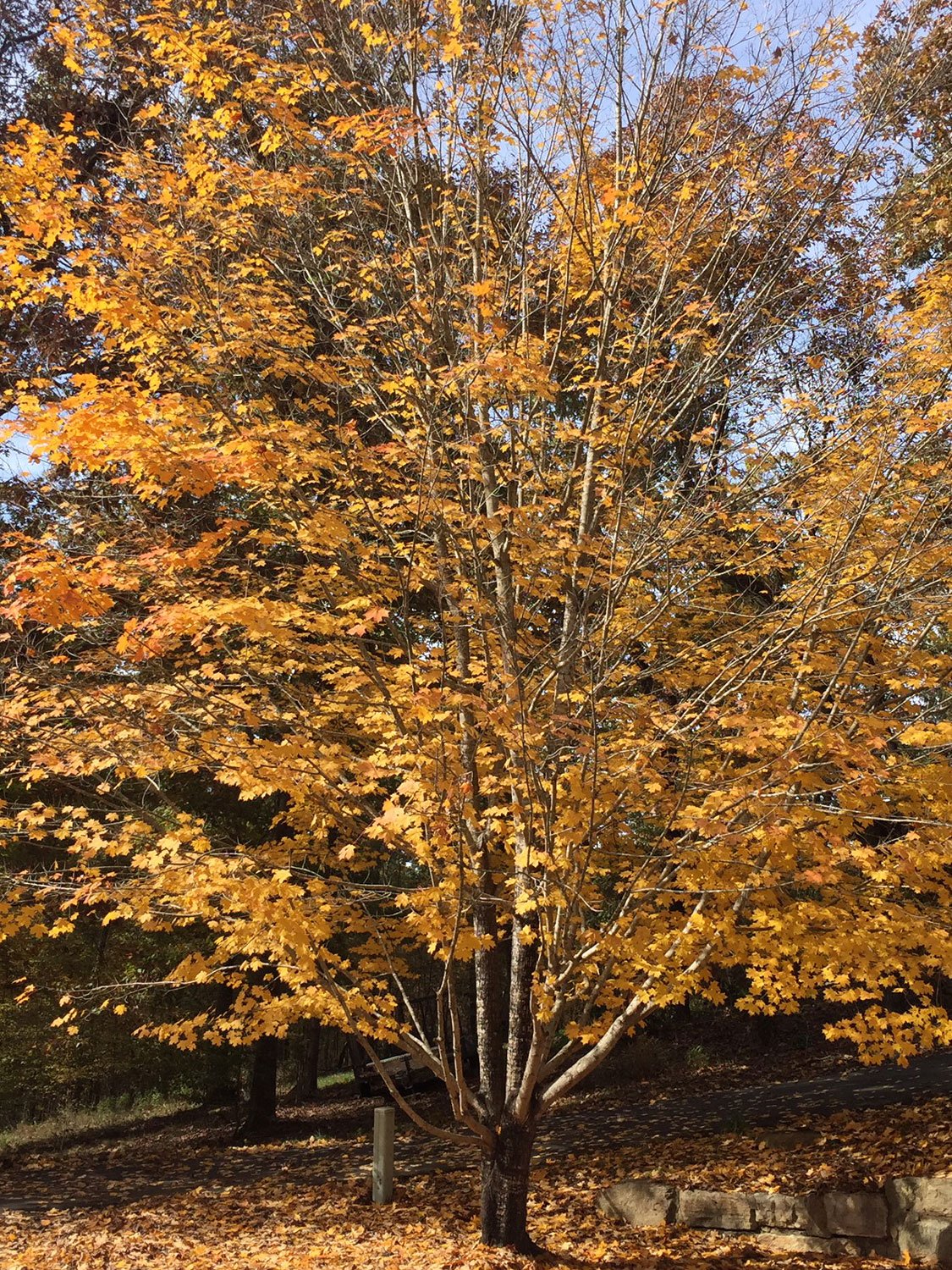 I knew that the weekend after Halloween was probably going to be my last chance to get outside to see the colors. So I began to make plans – big plans, elaborate plans, plans involving recipes and checklists and schedules.

When my own schedule finally solidified, on Wednesday morning, I went to the reservations site for Arkansas State Parks, which has a very useful tab, “available this weekend.” Spoiler alert – nothing was. 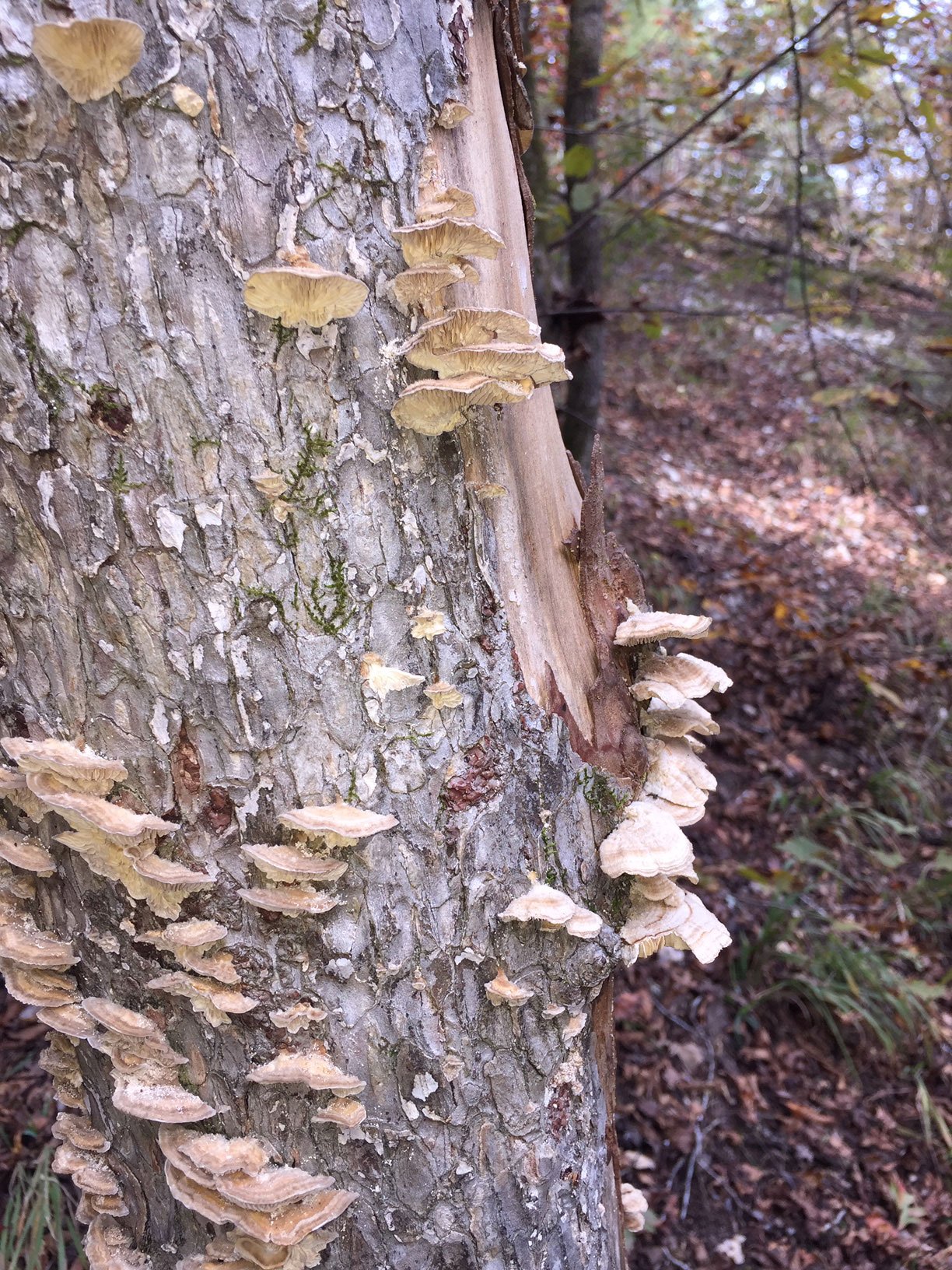 Lake Ouachita State Park – nothing available. Lake Catherine – nothing. Petit Jean – not a thing. Park after park was booked solid. It seems I wasn’t the only one looking to both the weather and the leaves. 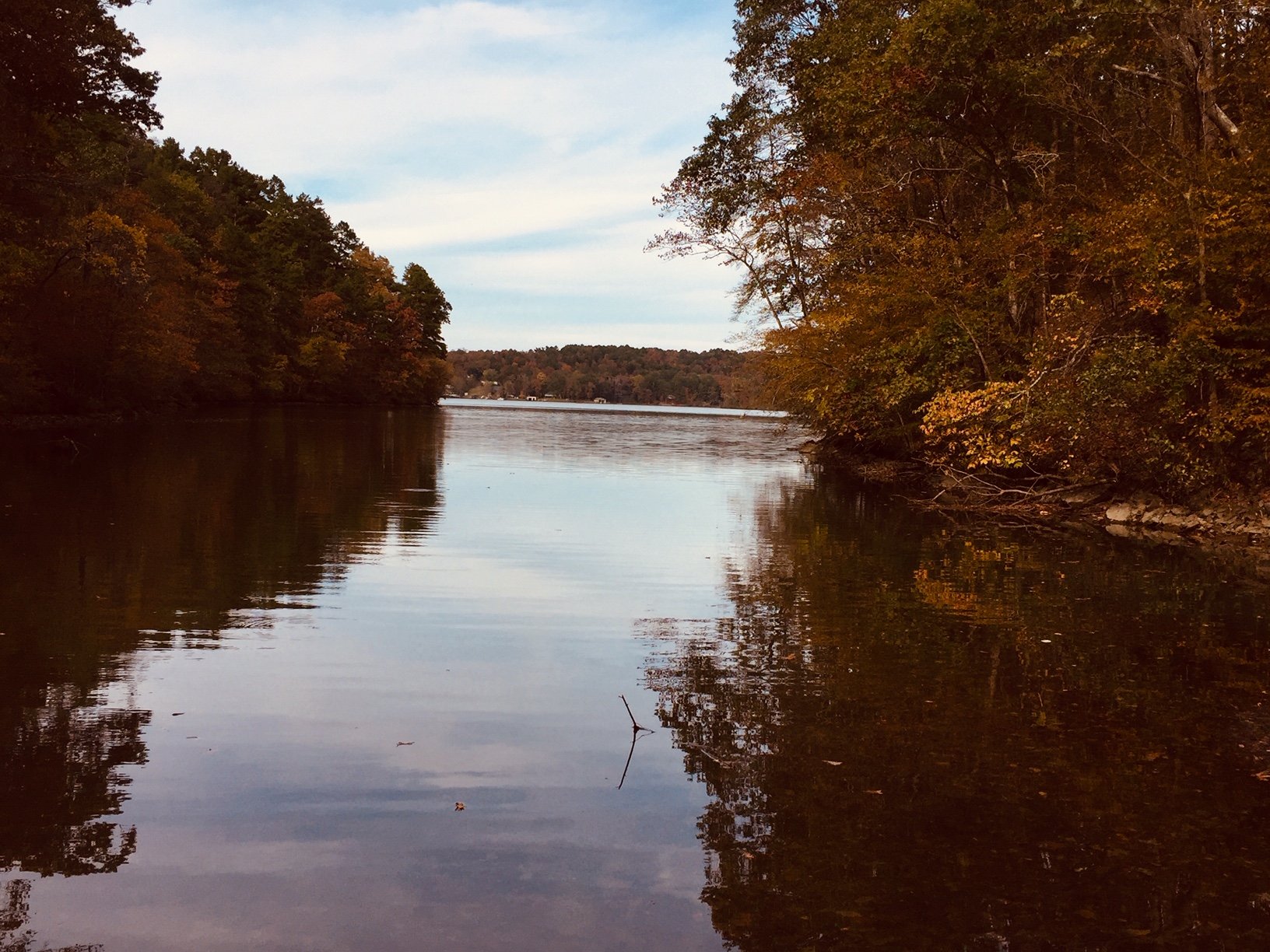 Mind you, I love camping. I love my hammock, I love campfires, I love cooking (whether on the fire, on the grill or on my camp stove). I like a warm fire and a cold beer and the night noises.

And in my mind, I’ve been conflating the two – camping and hiking. But did I have to? What if – follow me here – I could hike and enjoy Arkansas’ lovely state parks and not camp?

So I took RKOL’s very helpful list of favorite fall hikes and began to map out an alternative plan. Within a few hours, I had a new weekend cobbled together – with plenty of flexibility built in. I found a cheap hotel in Malvern, striking distance to many of the state’s most beautiful parks.

Early Saturday morning, I left the Piney Woods of East Texas for a broader color palate. My first stop was Lake Catherine State Park, a favorite that I’ve been to three times now. After a fairly leisurely drive with some stops for breakfast and a few supplies, I arrived mid-day.

And the hike was glorious. From the magnificent golds of the maples and other hardwoods, to the thundering waterfall that was but a trickle when I was there last summer, the park was at her best. 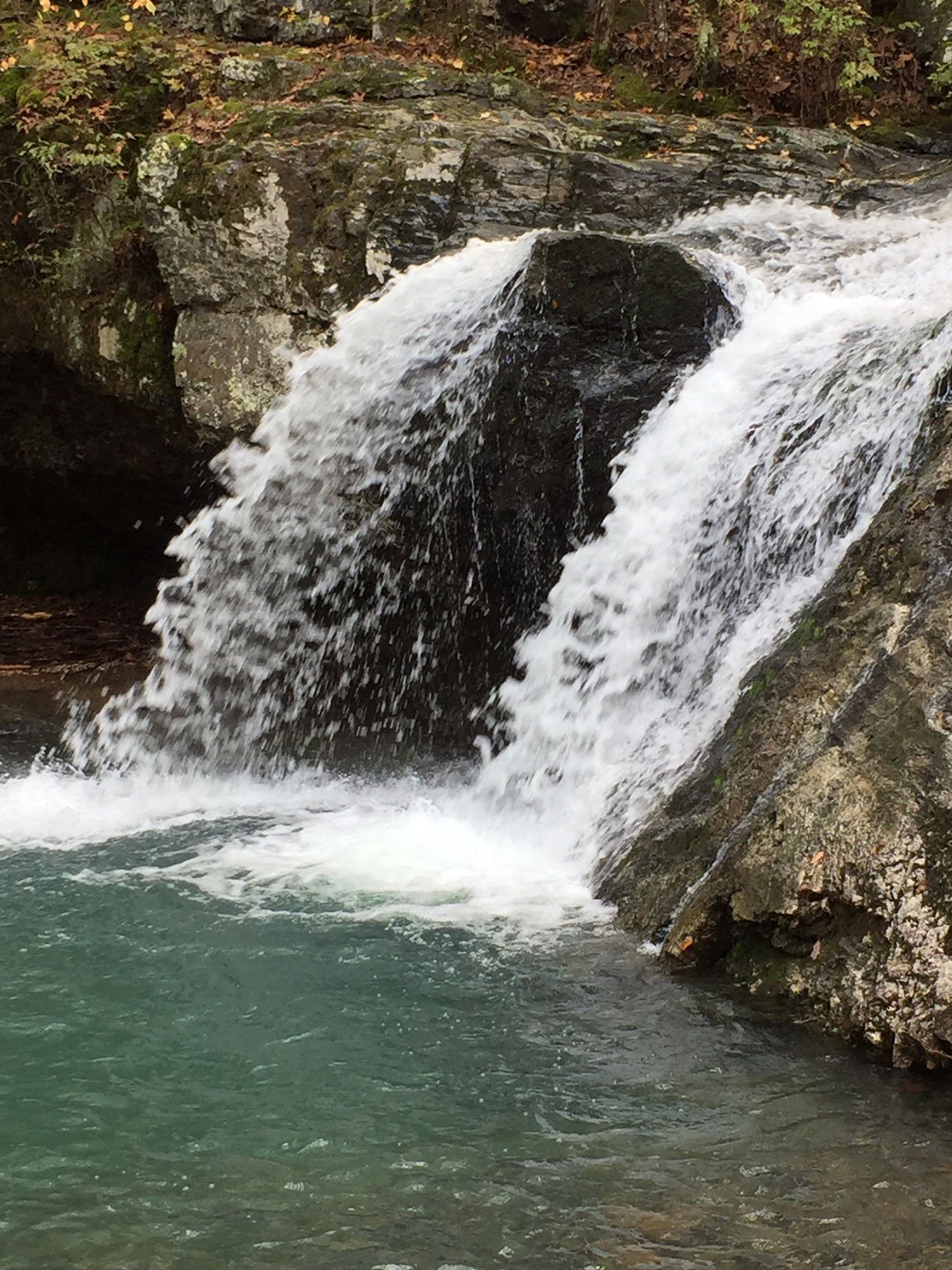 Knowing my time was limited, I hiked the Falls Branch Trail, instead of the longer Dam Mountain Trail or Horseshoe Mountain Trail. But even at two miles, it was a vigorous hike with glorious scenery.

Something I’ve been paying more attention to lately is the fungi – the many brightly colored mushrooms – that I see in Arkansas. I don’t know if it’s our more acidic soil at home, but I don’t see those varieties in East Texas. The weeks and weeks of rain in southwest Arkansas has resulted in kind of a second spring, with many mushrooms bursting forth. 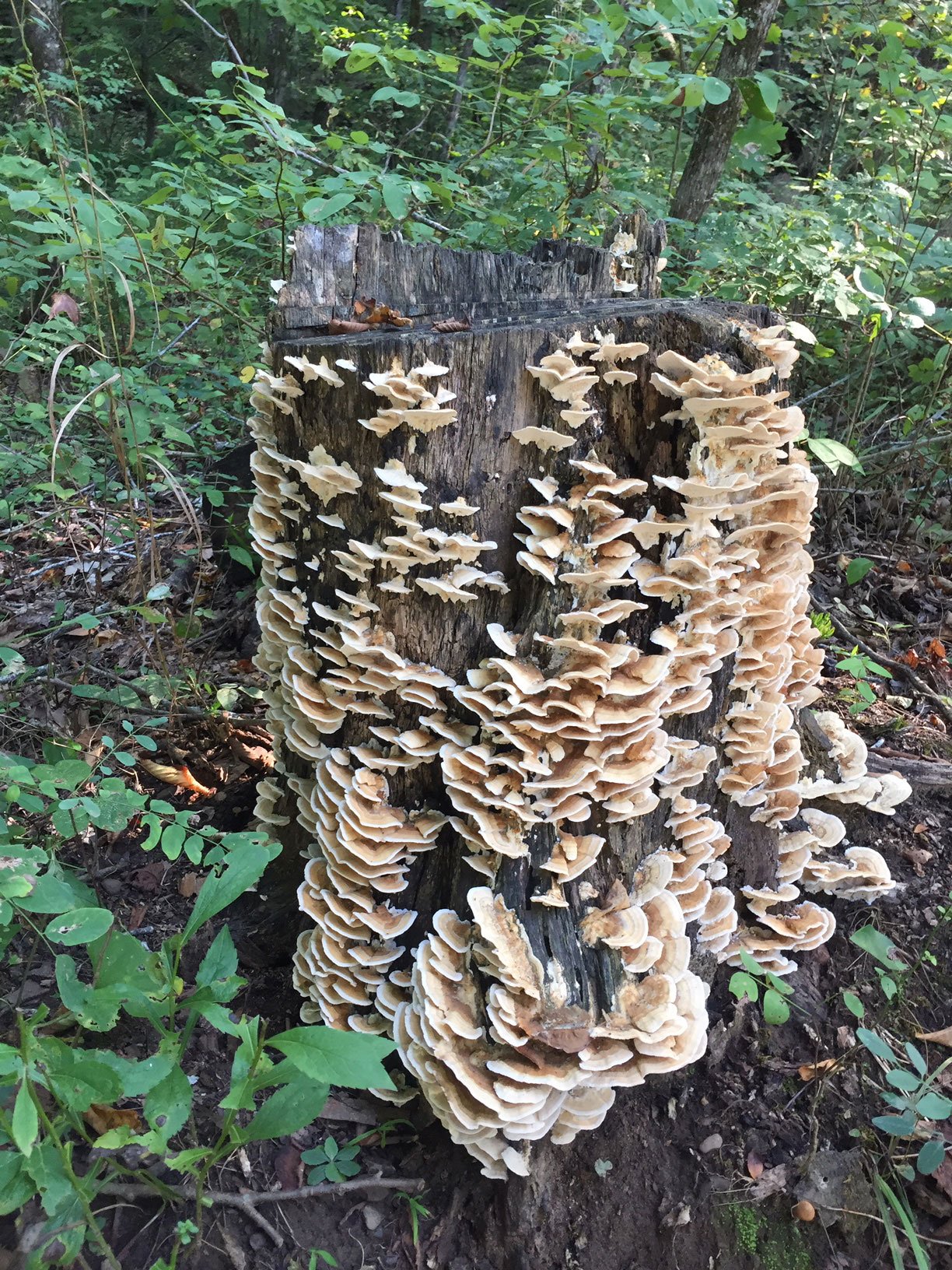 And of course the leaves were beautiful. The mountainsides were speckled and spectacular. The late afternoon sunlight hit the western slopes just right.

After my hike, I had some options I normally don’t. When I camp, I tend to stay put. But staying at a hotel, I could easily shower, put on real clothes, and venture out. After freshening up in Malvern, I headed to Hot Springs for some dinner. I highly recommend the fish & chips and craft beer at the Copper Penny Pub. Hot Springs is delightful, even just for a dinner and a stroll in the cool evening air. 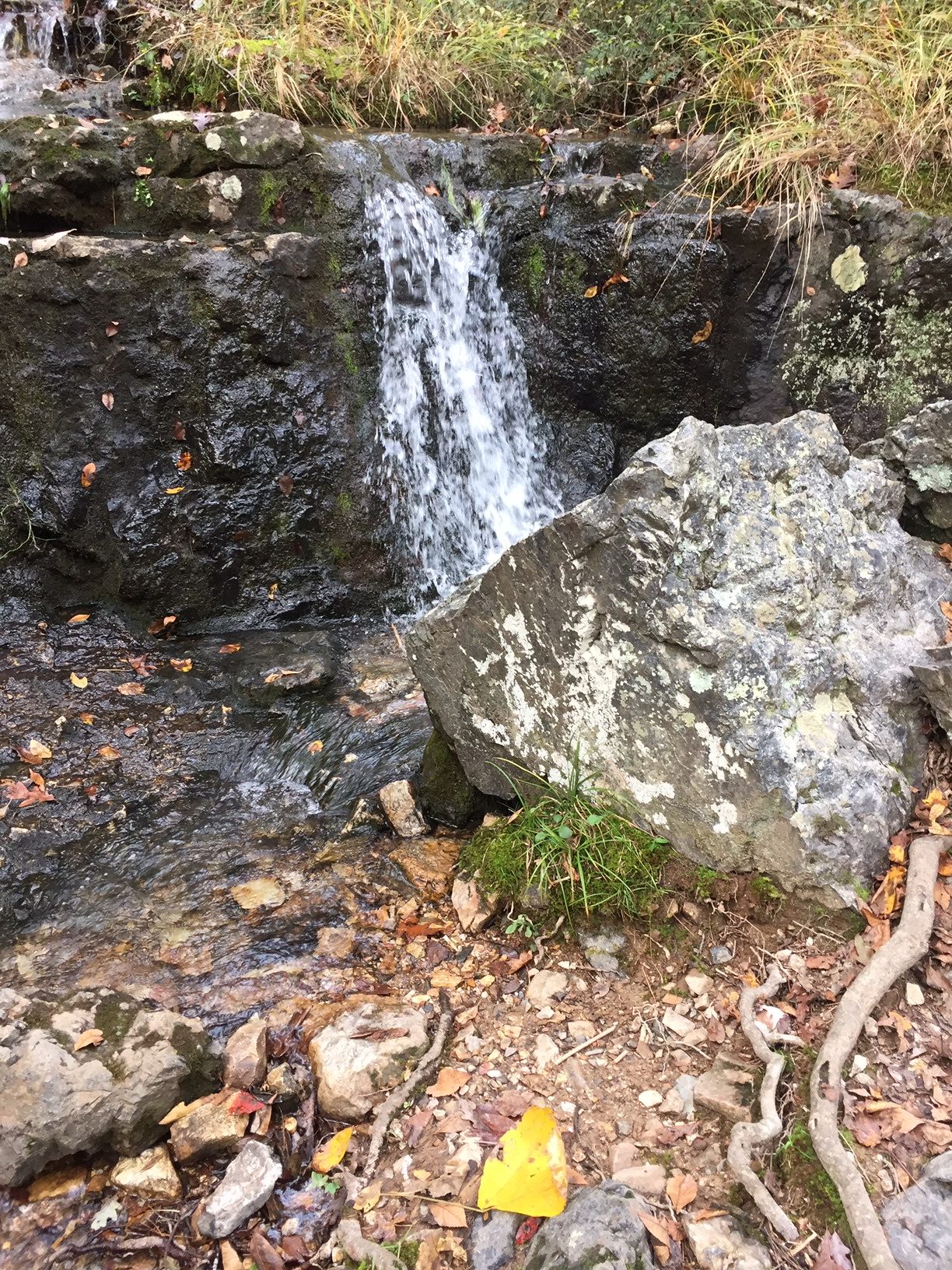 The next day, I had options – something that again, can be limited by the logistics of camping. I could go back into Hot Springs and hike some of its trails; I could hit another favorite, Lake Ouachita, or I could try somewhere new.

I decided on Petit Jean State Park. Thanks, RKOL! It was a great choice. The Cedar Falls Trail was moderately trafficked, but worth every climb, every descent and every close encounter with hikers going the other way. 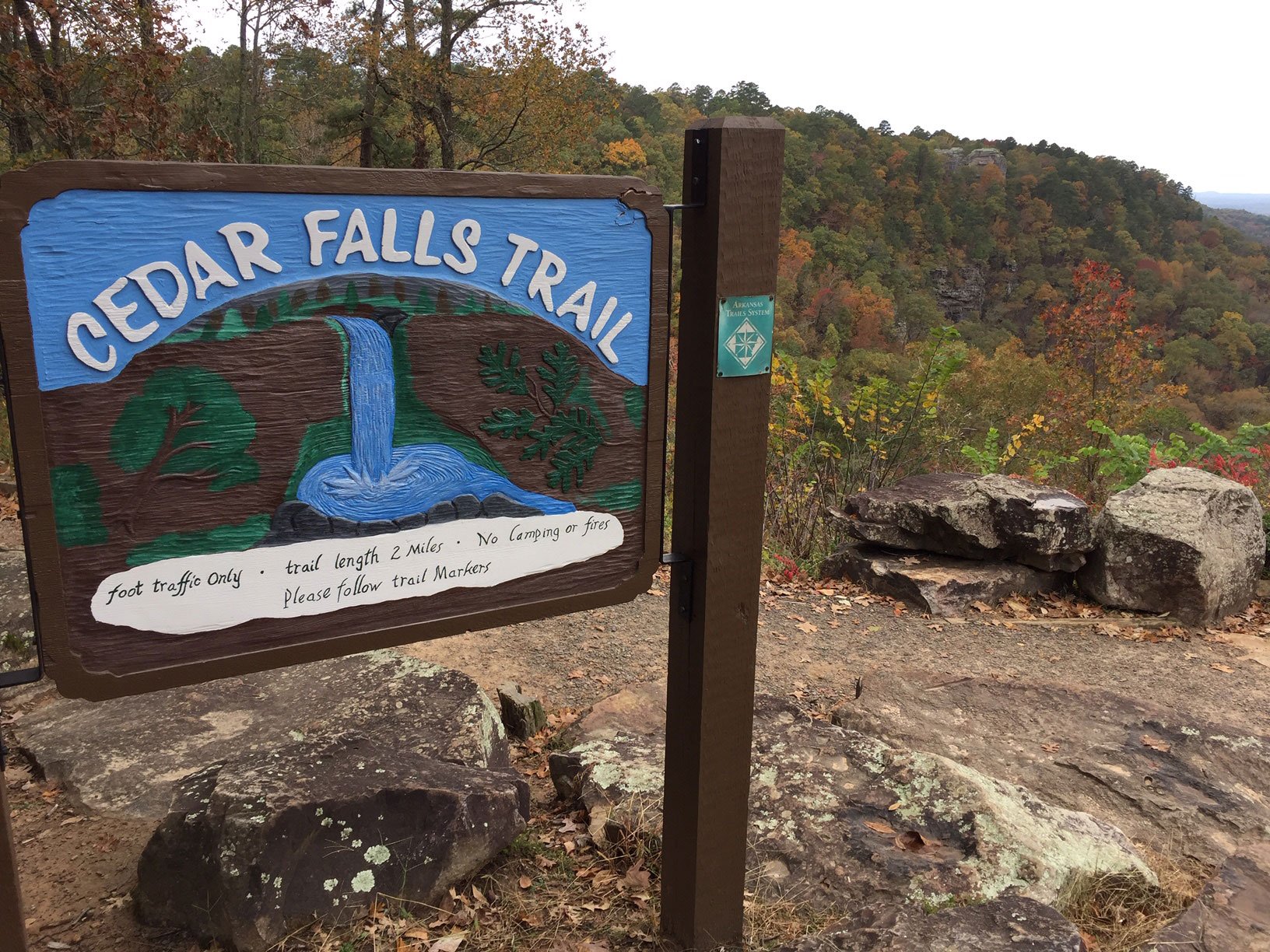 The quick trip to Petit Jean also allowed me to scout ahead for future camping. At the visitor’s center, I asked a park worker which sites were best for hammock camping. He smiled, said it’s very popular there, and he took out an orange highlighter to mark a map for me. So in the future, I know that Loop B is perfect for hammocks. 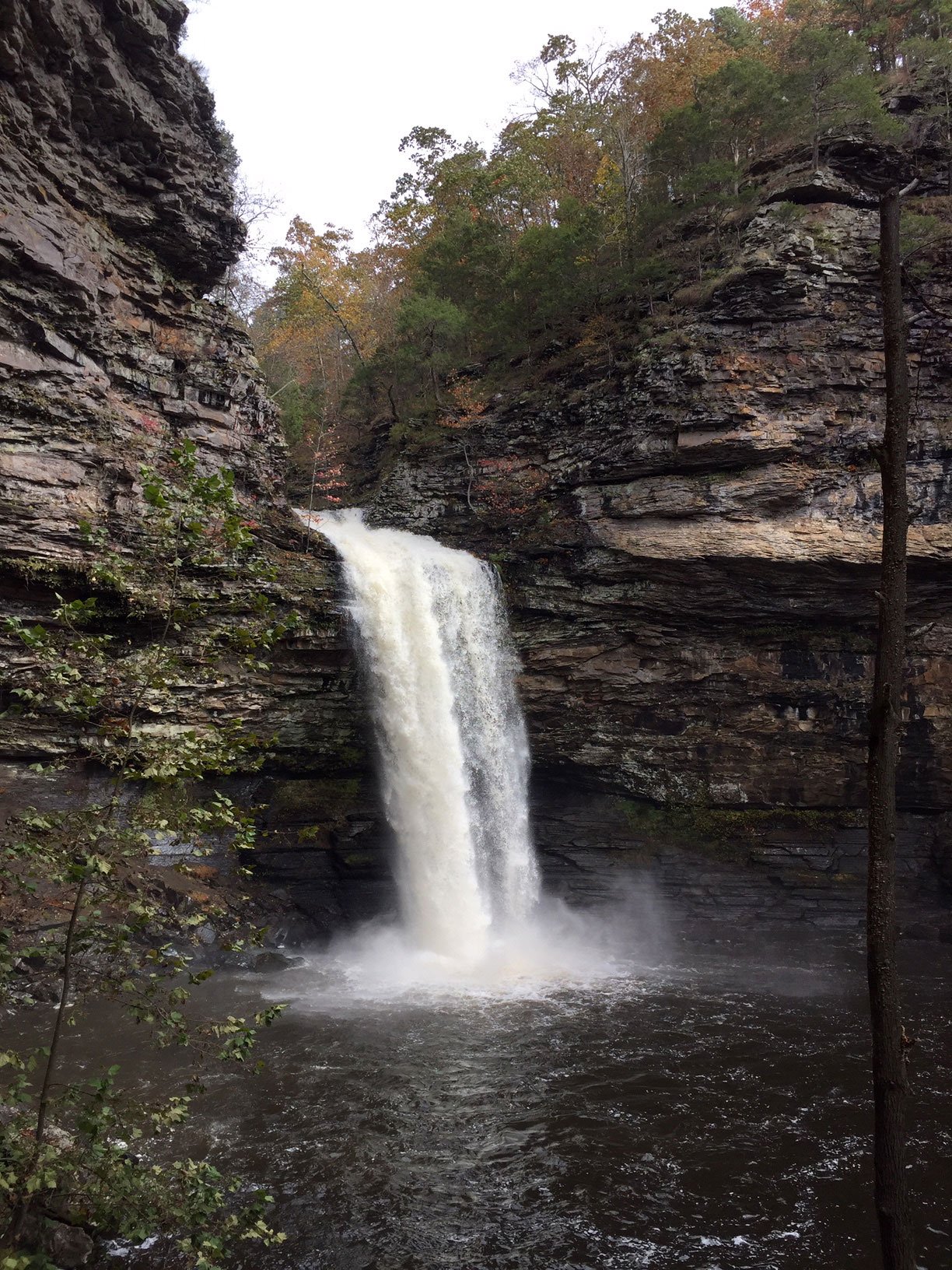 After hiking to the falls, I drove up to the overlook, which shouldn’t be overlooked at all. As I viewed the falls rushing through the gap, I was felt pleasantly and rewardingly exhausted. Then I realized I was looking down on a couple of circling buzzards. Ha. Not today, buzzards, not today.