There are many aspects that set backpacking apart from car camping. One, you carry all of your equipment, food, and water. Two, there are no showers, toilets, or grills. Before my first backpacking trip, I had already been primitive camping several times and spent up to a week without a shower, so I knew what to expect there. I was not, however, practiced in carrying that heavy of a pack. 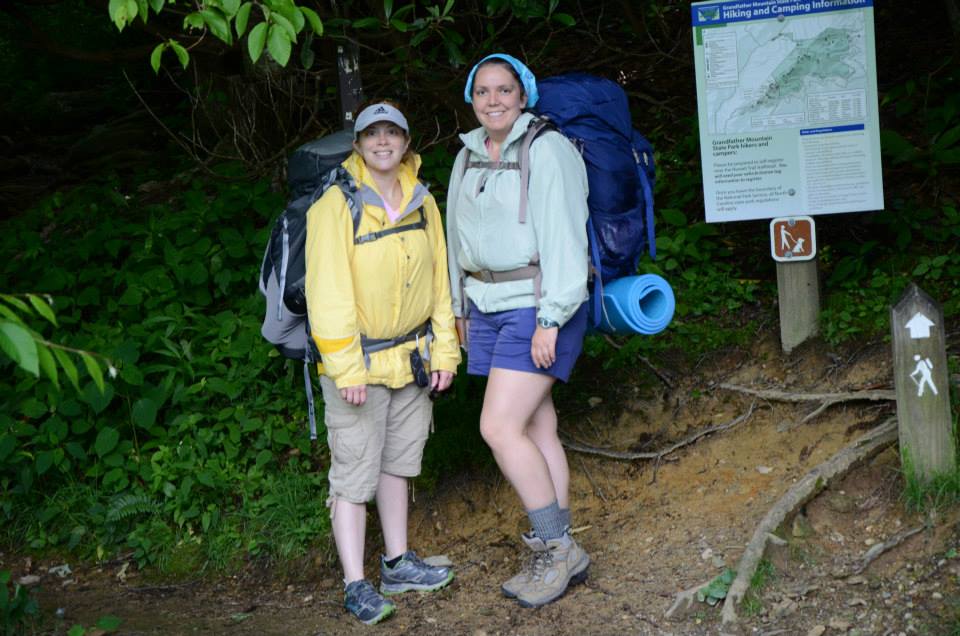 Before taking on the trail

And wouldn’t you know I picked one of the hardest trails for my best friend, Crystal, and I to do as our first backpacking trip. We might not have gone far, but we climbed about 2,000 feet with overstuffed packs. 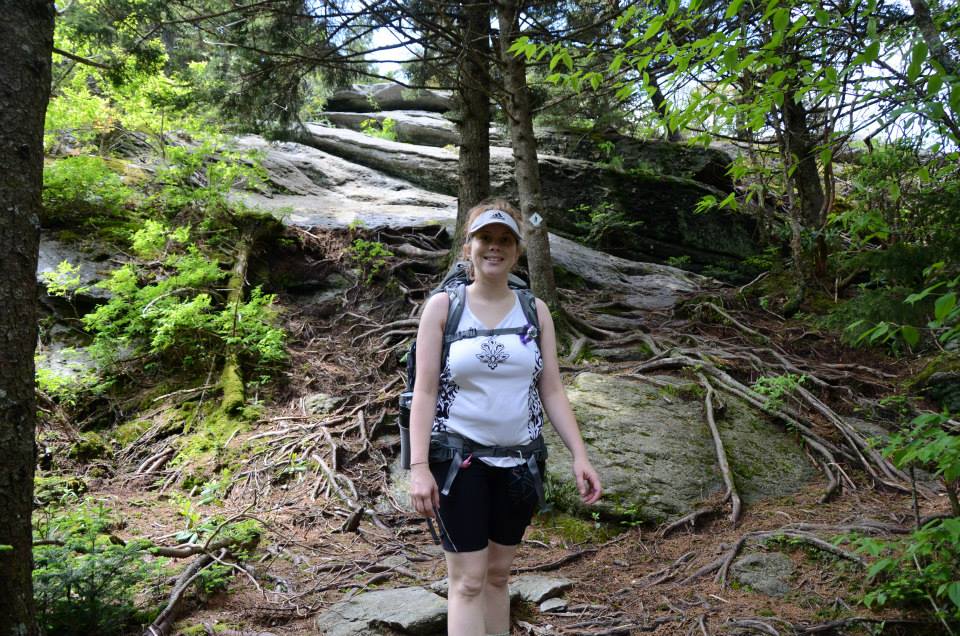 Yup, that’s the trail behind her. 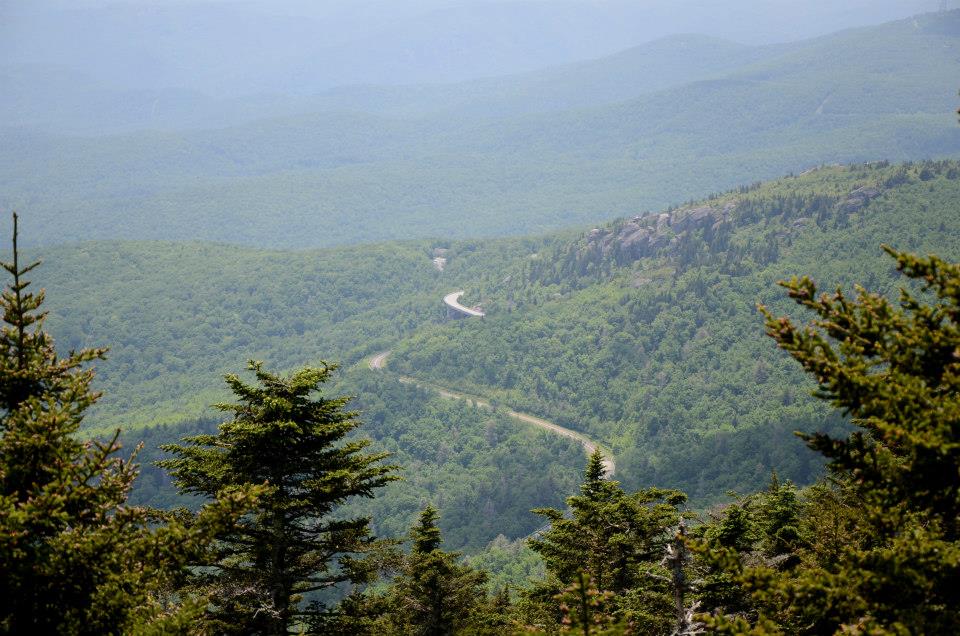 The view of the Blue Ridge Parkway

Having wanted to do some backpacking on our trip to North Carolina, I thought the state park sounded perfect, and if we wanted to we could hike into the stewardship foundation to see the famous bridge. As I started to do research before the trip, I noticed the trails were not only steep, but incorporated ladders and cables to assist hikers up near vertical parts of the trail. Perhaps I was a little overzealous, but I was sure we could do it. 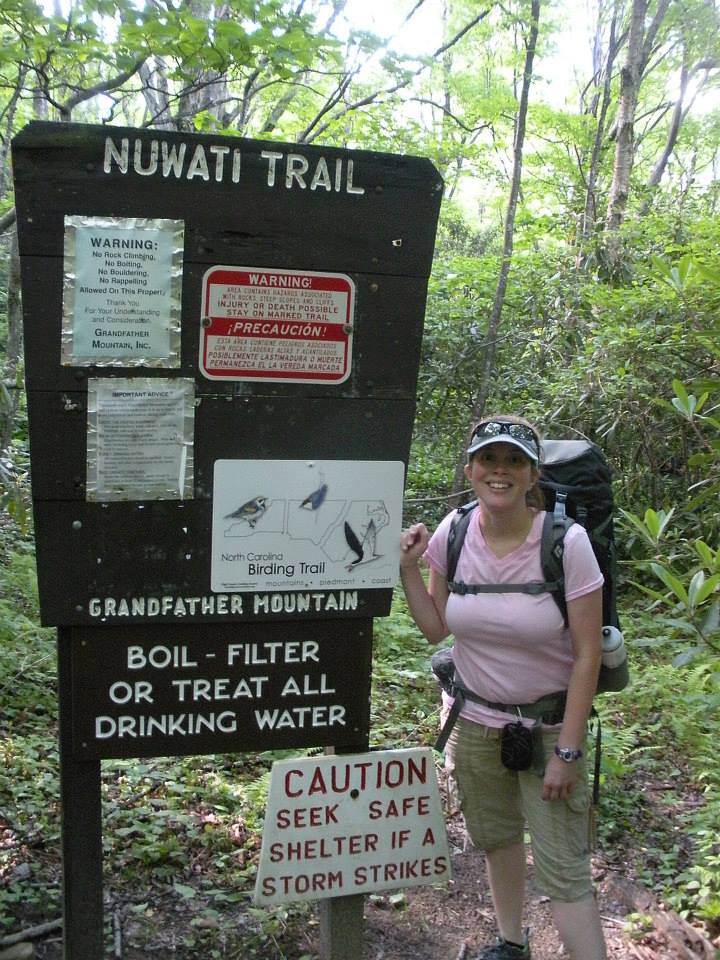 Where the Nuwati Trail splits off from the Tannah Trail.

A map of the park can be viewed here.

We parked at the Boone Fork Parking Area, and began our hike on the Tanawha Trail. From the Boone Fork trailhead, the Nuwati Trail quickly breaks off to the right. We chose to take the Nuwati Trail to the Cragway Trail, which a little further up the mountain connects with the Daniel Boone Scout Trail. We could have stayed on the Tanawha Trail which also connects to the Daniel Boone Scout Trail closer to the trailhead, but we thought the Cragway Trail sounded interesting.

A crag is a steep or rugged cliff or rock face – not the best trail for a first time backpacking trip. We climbed and climbed the steep trail. And, added to the difficulties of an overstuffed pack and a steep trail, we had to hike through mud. I slipped several times in the greasiness of the trail. When we finally made it to the Top Crag View, the scenery proved to me the rugged climb was worth it. We had sweeping views of a steep valley, that I bet is breathtaking in the fall. 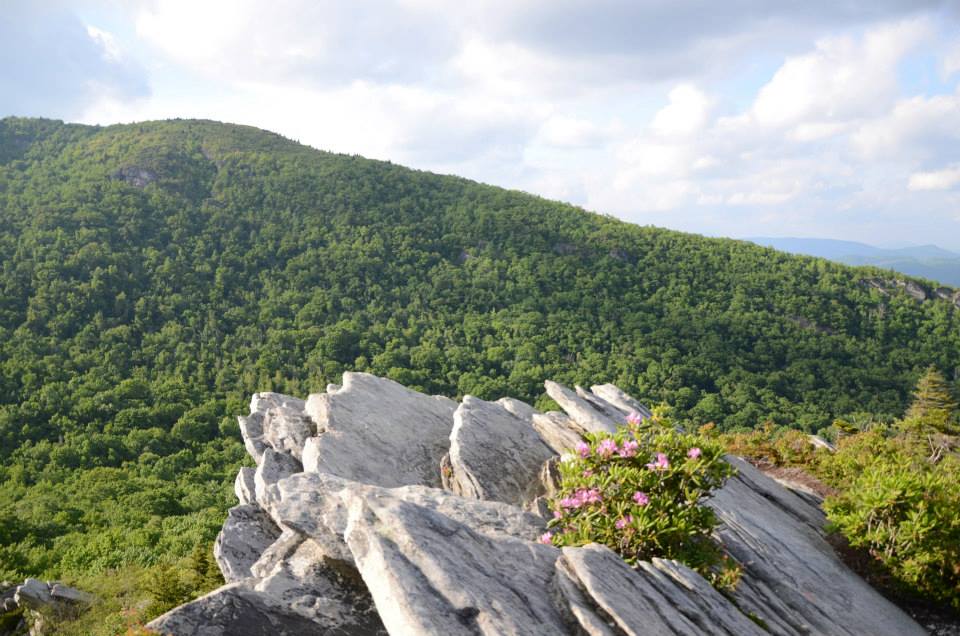 Part of the Top Crag View

We began the rest of the way to our backcountry site. After we came to another vista, Flat Rock View, we connected with the Daniel Boone Scout Trail, and shortly ended the day at our site.

The Daniel Boone backcountry site has a water source so we were able to replenish our supply. It also has wooden risers for pitching your tent. We did not have a freestanding tent and could not figure out how to stake it down, so we searched for a flat place to pitch our tent.

The next morning we headed on up the trail toward the stewardship. The trail was lush and green, it was also thick with vegetation. Ferns carpeted the floor. 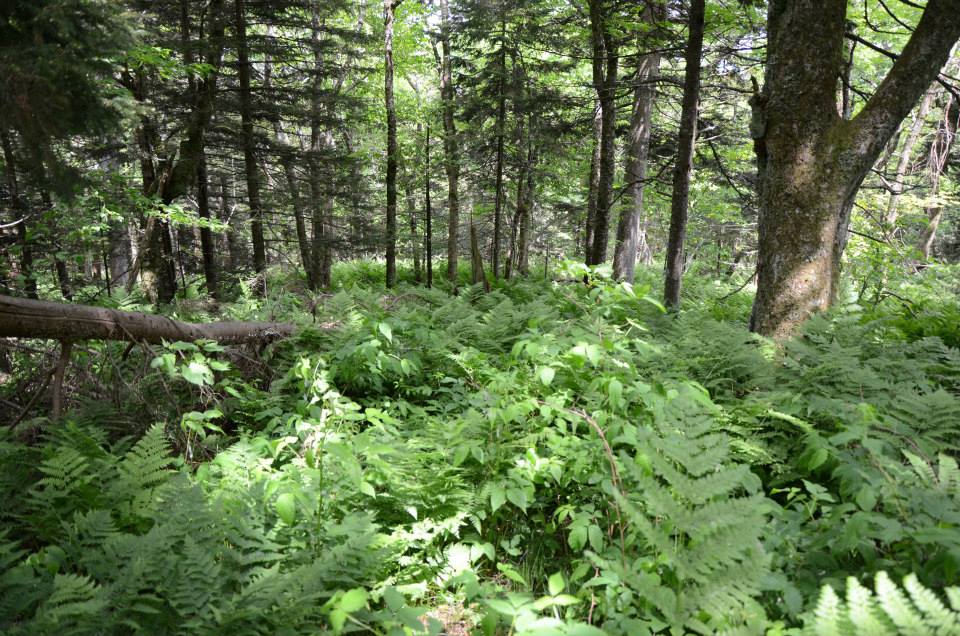 One of the unique aspects of this trail that I found interesting is around mile three (using the Cragway Trail) you can see remnants of a plane crash. In the 1980s a single engine plane crashed and instead of cleaning up the crash site, the FFA simply left it and hikers can observe it. It is not marked and kind of hard to see through the thick vegetation. It is also scattered in a few areas, so you have to look for it. We were actually on the way down the mountain when we noticed it, having passed it on the way up. 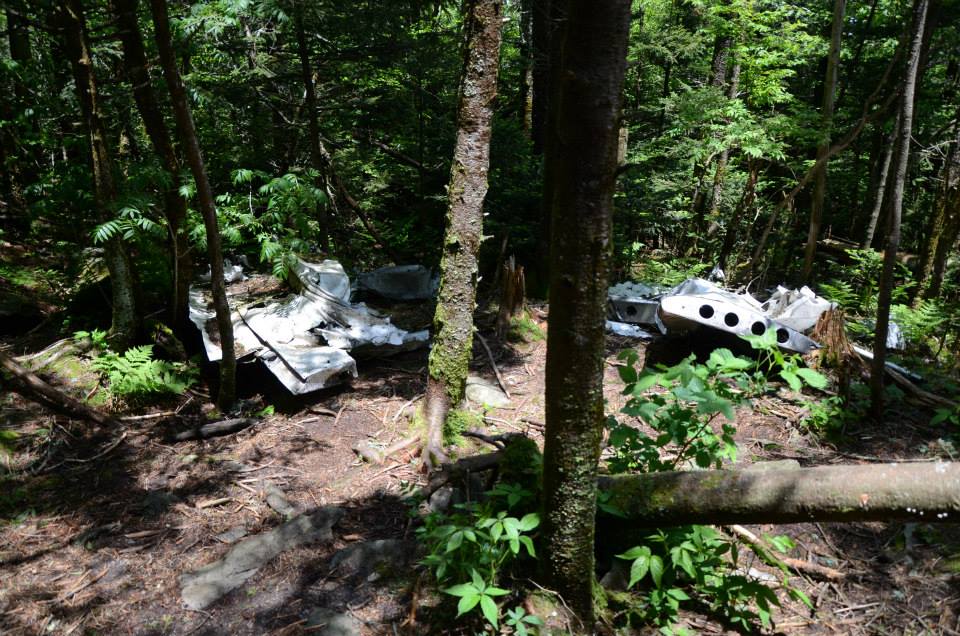 Some of the plane wreckage

The trail also provides a great view of the viaduct on the Blue Ridge Parkway, one of the signature scenes on the parkway. 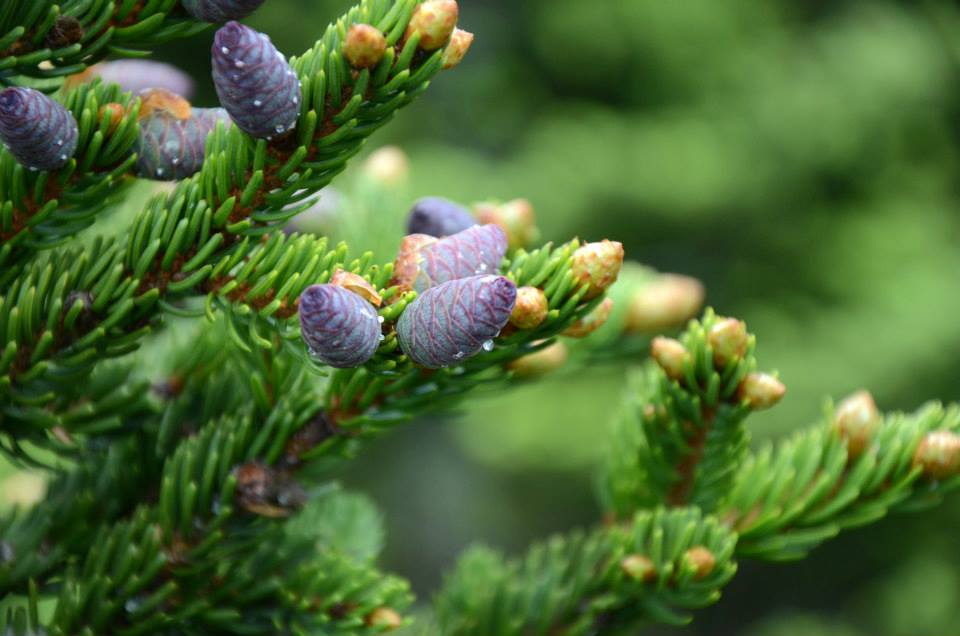 As we climbed in elevation,  we noticed the trees were different, the fog was thicker, and the temperature was cooler. This is one of my favorite things about hiking, when you can literally see and feel the elevation change. 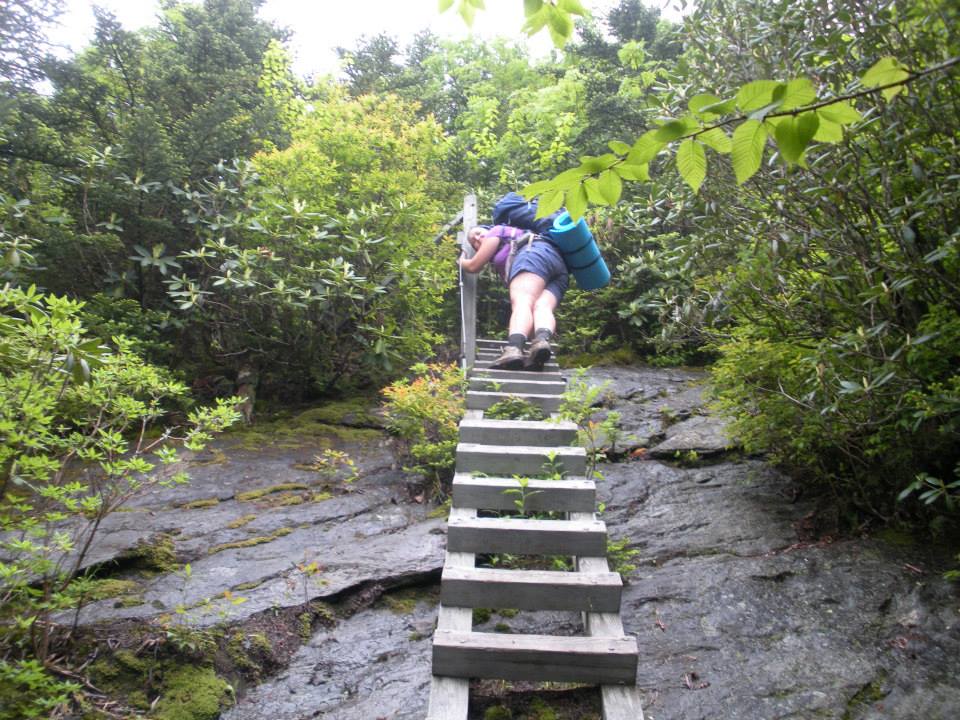 One of the ladders

As we neared Calloway Peak, the highest spot in the Grandfather Mountain area at 5,946 feet, we came to our first set of ladders and cables. The ladders were not too bad to climb with our packs, but the cables, which were like handrails on a stairway without stairs, were a little different. If it were not so muddy and slick, the cables probably wouldn’t have been so bad. 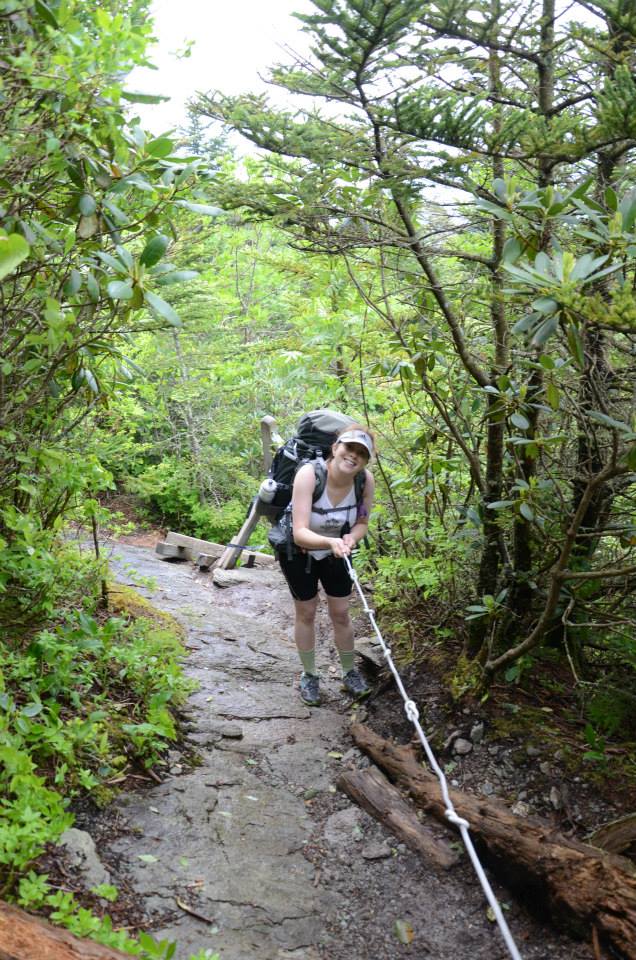 The view from the top was beautiful even in the fog, however without the fog I’m sure we could have seen mountains for miles and miles.

The trail continued along a narrow rock with more ladders. This part looked more dangerous than the previous ladders and cables. We were tired and cold, and even though the fog was beautiful, we decided the views would not be ideal. 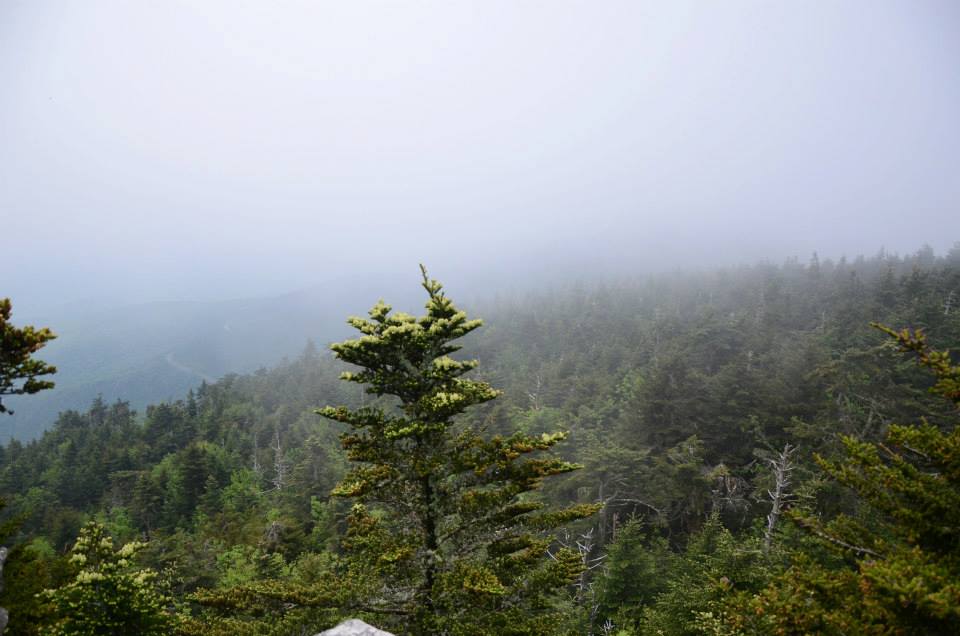 Foggy view from the top

On the return trip we skipped the Cragway Trail and headed straight for the car along the Daniel Boone Scout Trail to the Tanawha Trail.

Although we did not make our goal of hiking to the mile-high swinging bridge, neither one of us regretted it. Sometimes you have to be flexible with your plans to insure you have the best time.

We drove into Boone, N.C., that night to feast on a victory meal in celebration of our first backpacking trip.