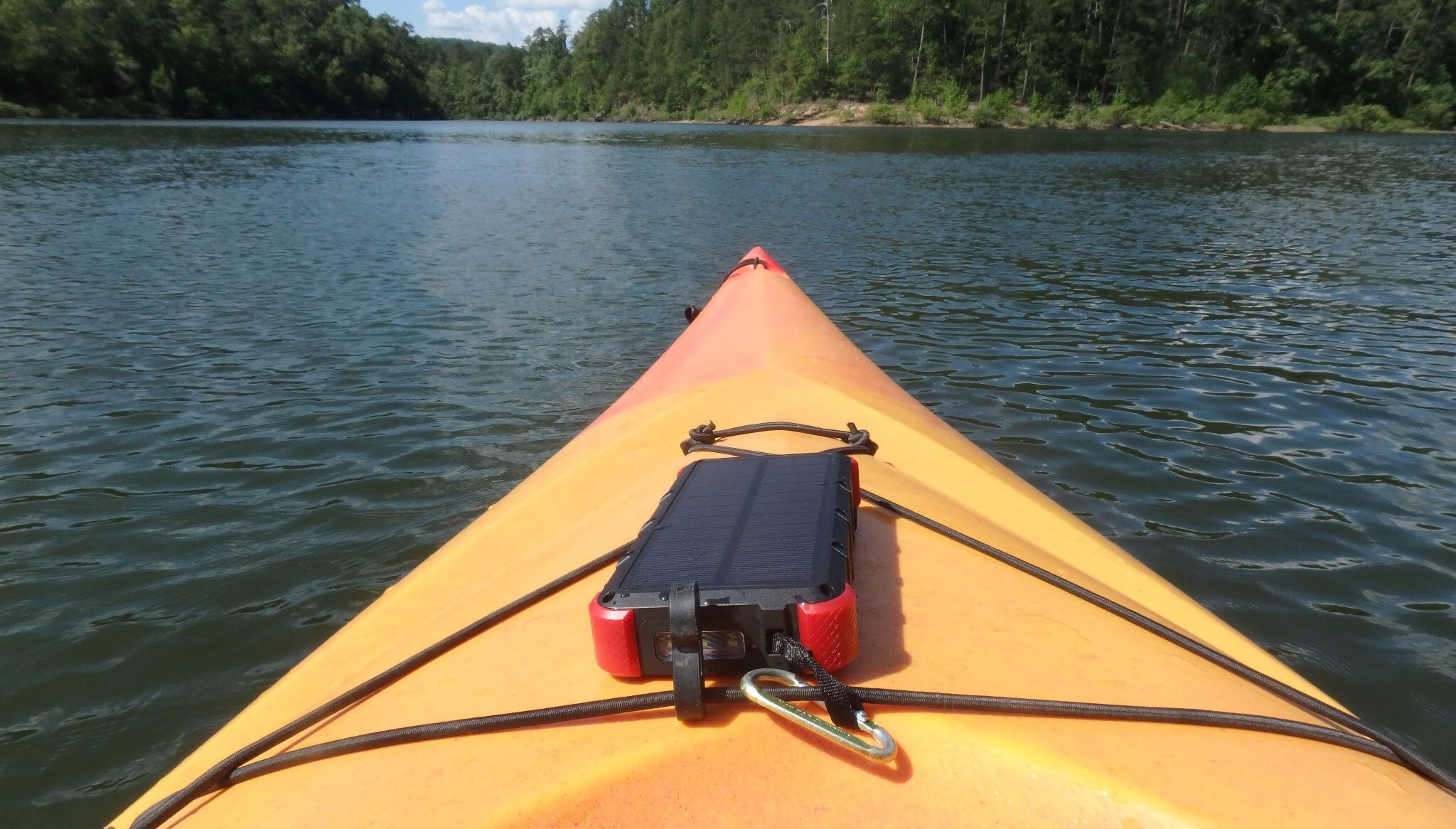 Note: OUTXE provided a sample to me at no charge in order to review. All thoughts and opinions are my own.

The more I backpack and travel, the more gadgets I find myself using. A cell phone has many uses other than making calls in the backcountry, like taking pictures and tracking my hiking. So I always take mine. I also recently began carrying a Garmin InReach to ensure I can call for help in case of an emergency. But these can be worthless when their batteries die and there is no power outlets to charge them. Enter the OUTXE Savage Rugged Power Bank.

Built with the outdoor adventurer in mind, the OUTXE Savage Rugged Power Bank is great for keeping all my gadgets going. Plus it’s a solar charger, so I can get power to it in the backcountry. To visit OUTXE’s website, click here.

I tested the 20000mAH which provides at least seven charges for an iPhone 8 or at least four charges for a Samsung 8. I use and iPhone 6 and got at six full charges and a full charge on my iPad as well.

One thing I found to be very helpful around the house is that it is portable charging. So, for instance, when I am working on my couch and not close to a power outlet, I plug my phone or iPad into the OUTXE and have it at hand. When my battery get really low, I am able to charge it while carrying it from room to room.

But this is called the OUTXE Savage Rugged Power Bank, it wasn’t mean for just at home use.

My sister’s family went on a camping trip while I was testing the product. In her family there are three teenagers. I knew cell phone batteries were going to be depleted, and with no electricity, there was going to unhappy campers. 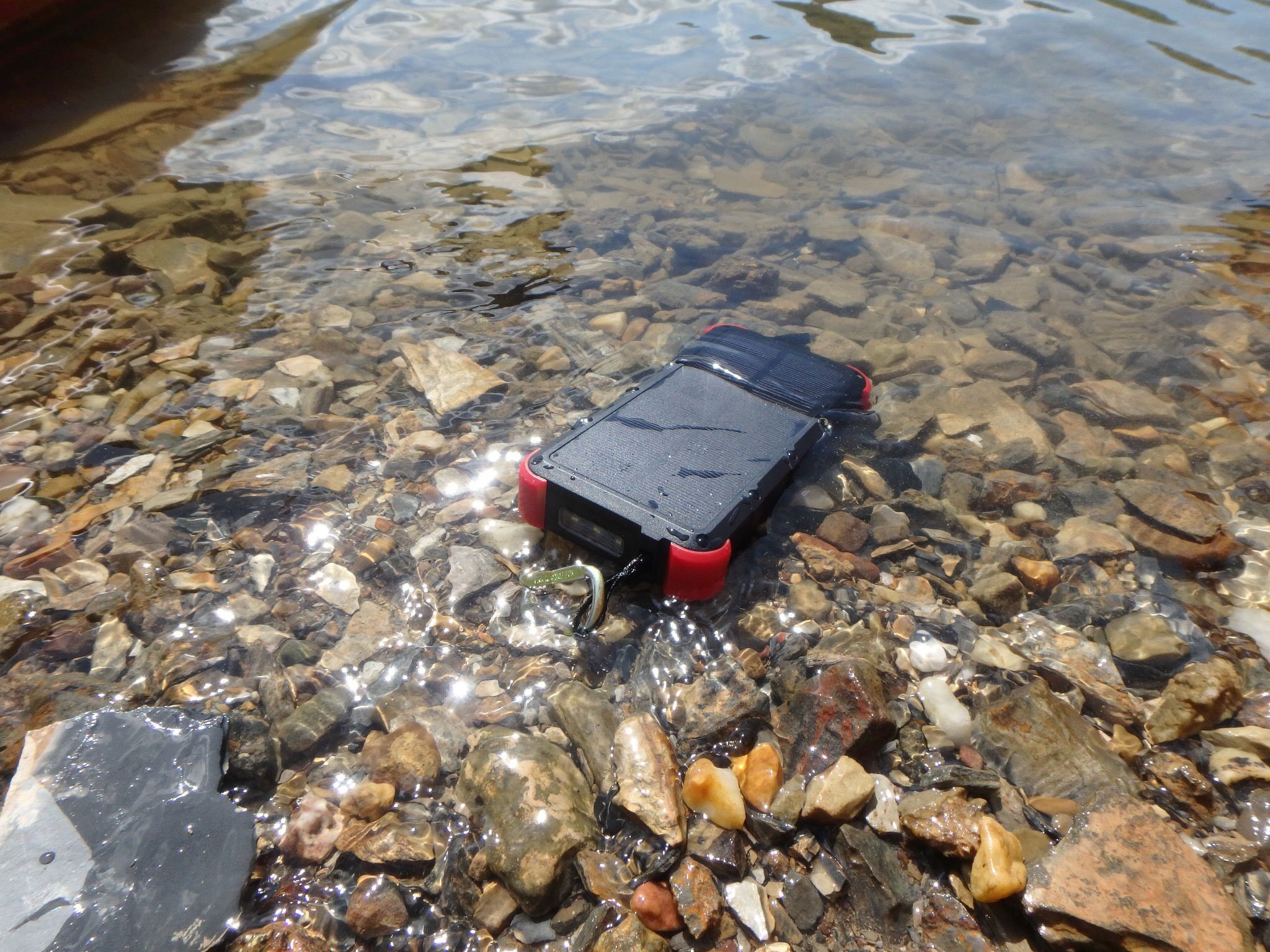 I gave them the power bank and they were thrilled. My nephew was able to charge his phone multiple times, and I still had about 15 percent of the power left when he returned it. He also said he like it because it charged his phone quickly.

Sometimes teenagers can be forgetful and clumsy, but I didn’t have to worry if the power bank was dropped from the table or fell into the lake because it is durable.

I really like the durability feature, because I don’t have to worry about keeping it safe in the rain or keeping it clean from dust in the backountry. I can attached it to the back of my pack and not worry about it.

It also like that it has a surge protector, short-circuit prevention, temperature control and other safety features to keep all my devices safe.

Fasten to your backpack

The OUTXE Savage Rugged Power Bank comes with two lanyards and two carabiners. When I tested the power bank while hiking I realized why you need two carabiners. I only used one to fasten it to my pack and it flopped around too much. But when I used two it held it securely against my pack. This also helps assure the solar charging side stays facing the sun.

It also has a bright flashlight on the end of it. I love how it is multifunctional. A flashlight is a tool that is great to have extra. 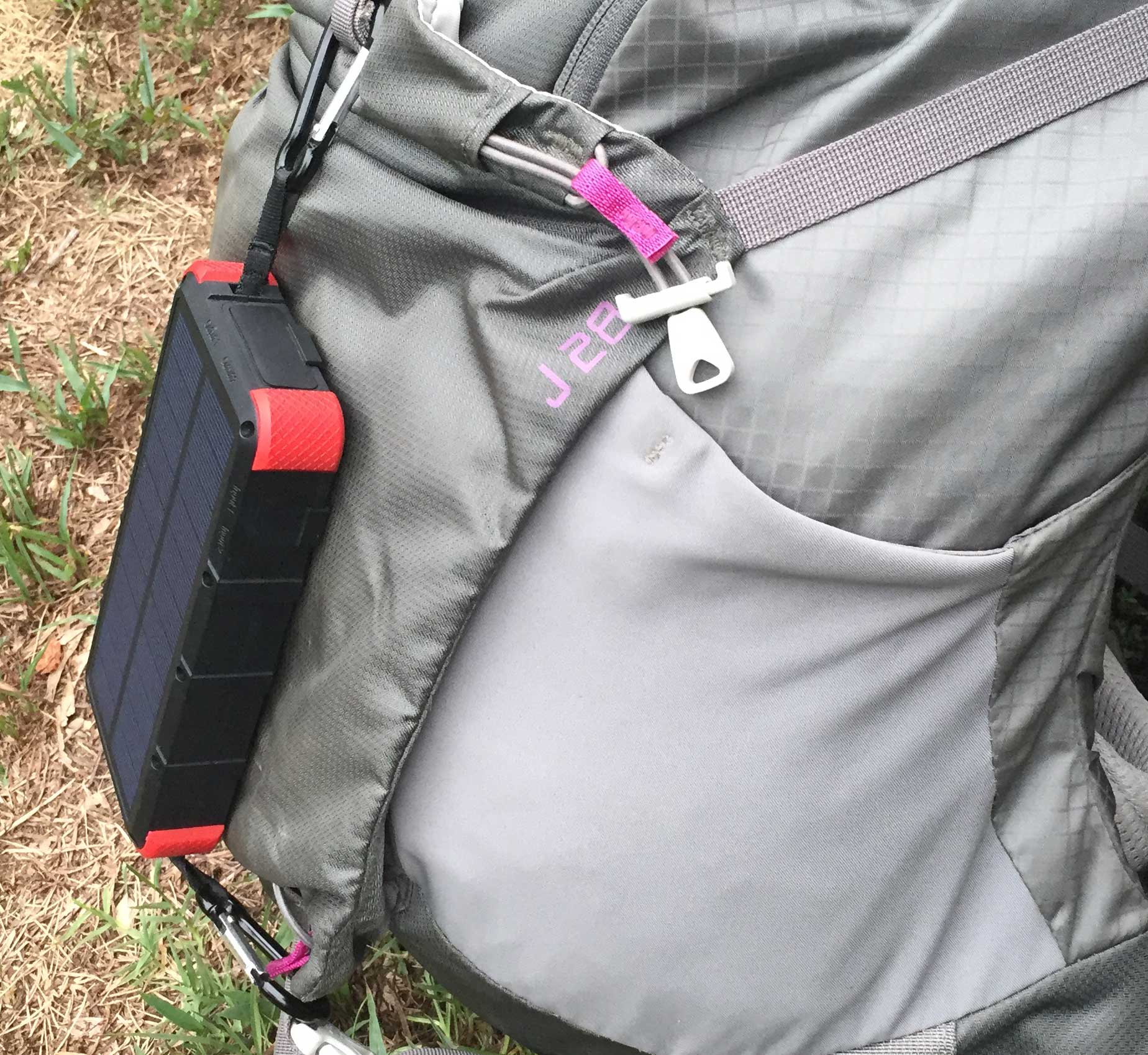 It has two input ports, a micro USB and a type-C, so that you can charge it from the wall or in your car. It comes with a micro USB charging cable and a type-C charging cable that plug into a USB charging port, like a cell phone charger. Another feature I really like about the power bank is if you are in a hurry it charges twice as fast when using both input ports at the same time.

It also has duel output ports, making it possible to charge two devices at once. I really like this feature, because I have been on backpacking trips where my phone is about to die but I have to wait until my friend finishes charging her phone. Or I can charge my camera and my phone at the same time.

One of the output ports is a quick charge, meaning it can charge devices up to four times faster than normal. 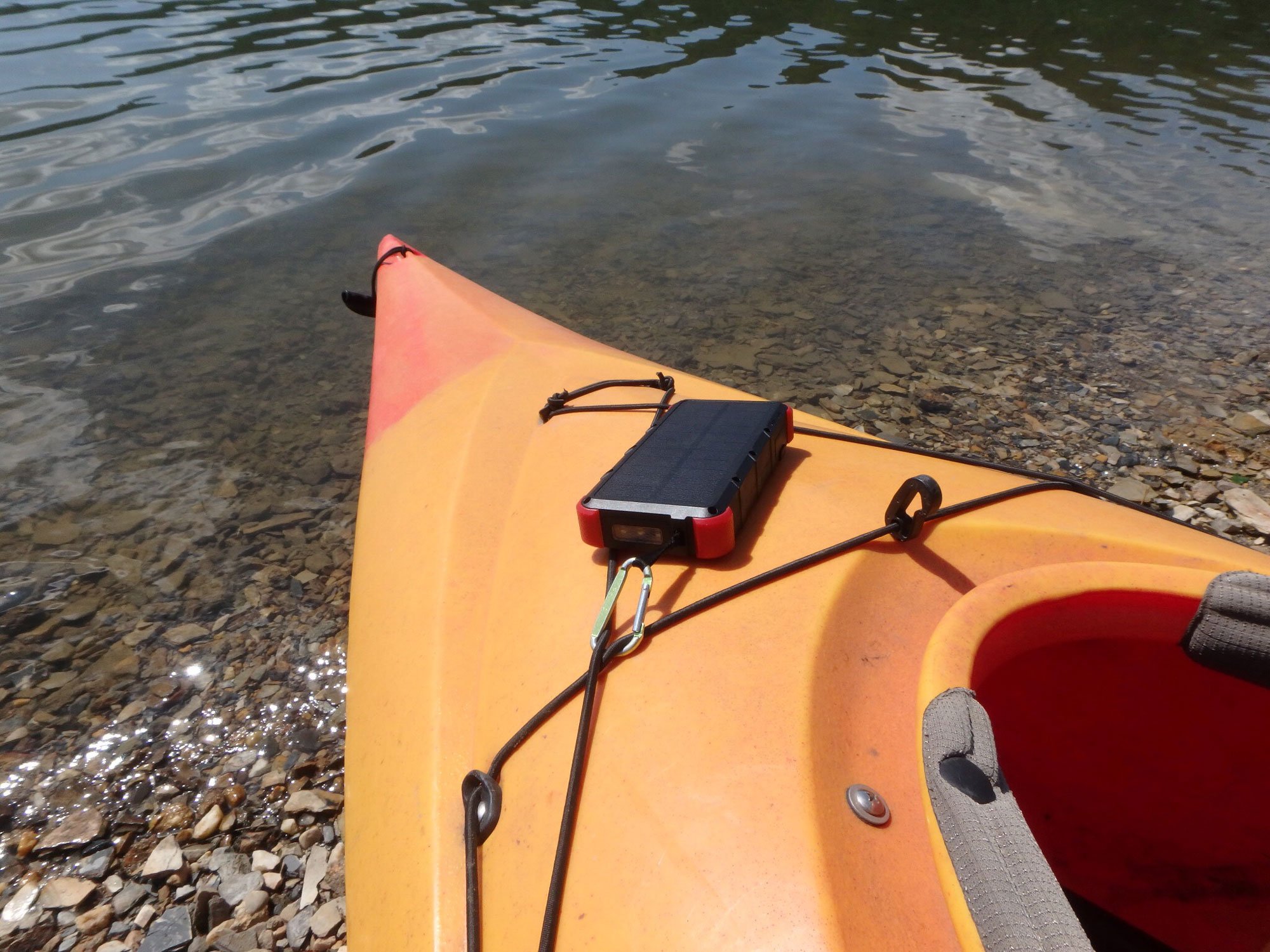 Overall I would definitely recommend this product. The only drawback I see is it is a little heavy for backpacking; however any power bank with the same amount of capacity is going to weigh the same.

It’s great for at home and on the trail. I’ve been through some long power outages due to weather, with one being four days. I like the solar charging feature on the OUTXE Savage Rugged Power Bank because in the event of a long power outage, I know I can still charge the power bank and therefore my devices.

Note: This post contains affiliate links. Shopping through those links supports Right Kind of Lost for which I am eternally grateful. 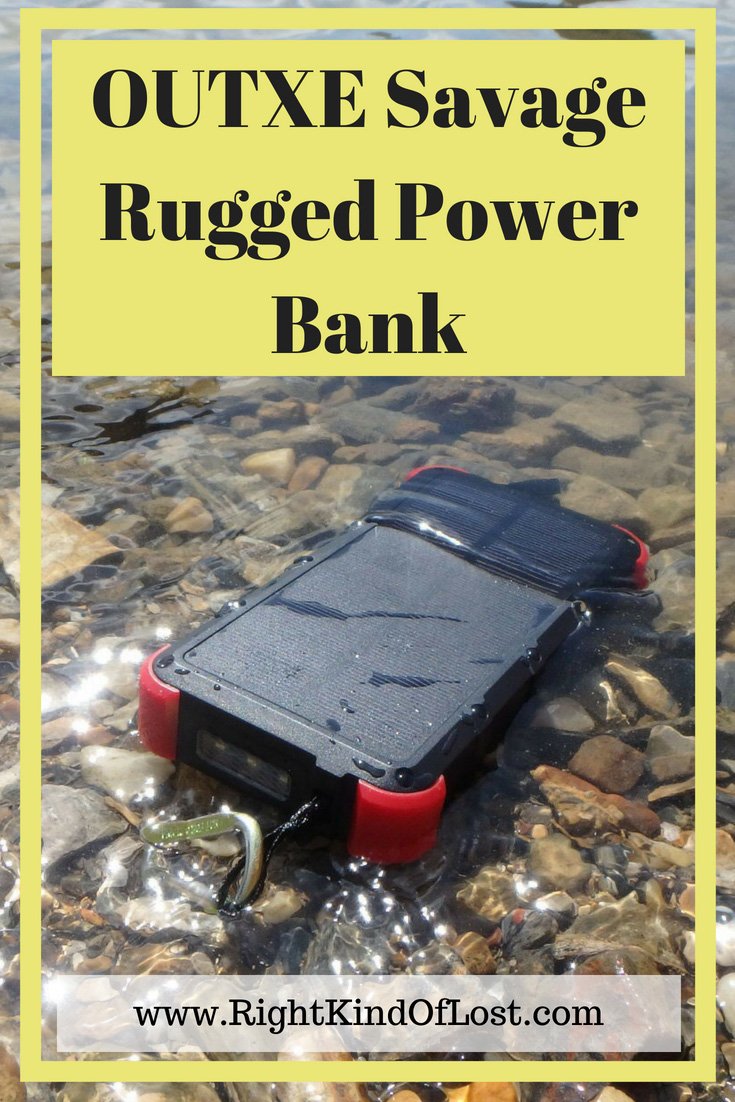