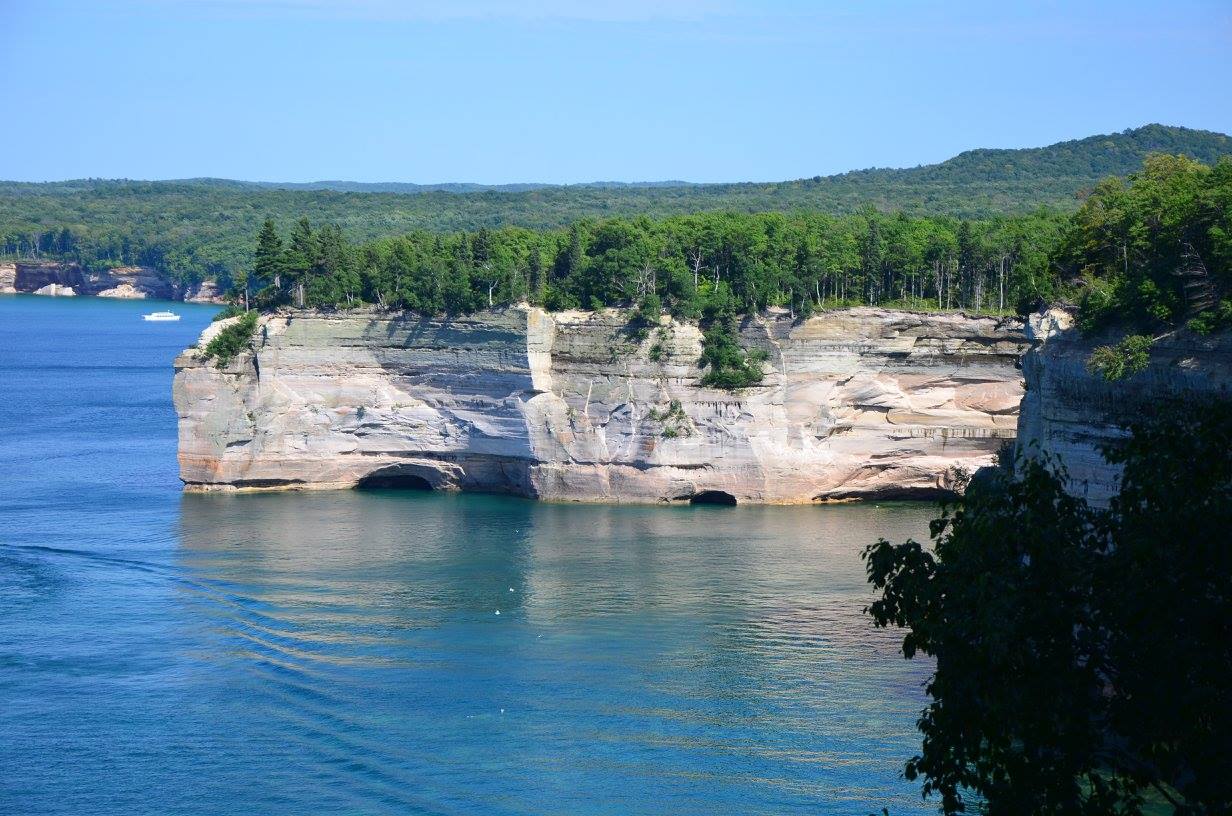 I never thought of Michigan as a prime location for backpacking. But after discovering the outdoor beauty of the state on Pinterest, I knew I had to put it on my list. Backpacking Pictured Rocks National Lakeshore in the Upper Peninsula is a must for adventure travelers.

Pictured Rocks National Lakeshore is 40 miles of shoreline along Lake Superior, the largest of the Great Lakes. The combinations of sandstone and minerals give the shoreline its signature multicolored cliffs. Other parts of the lakeshore include white sandy beaches and high sand dunes. 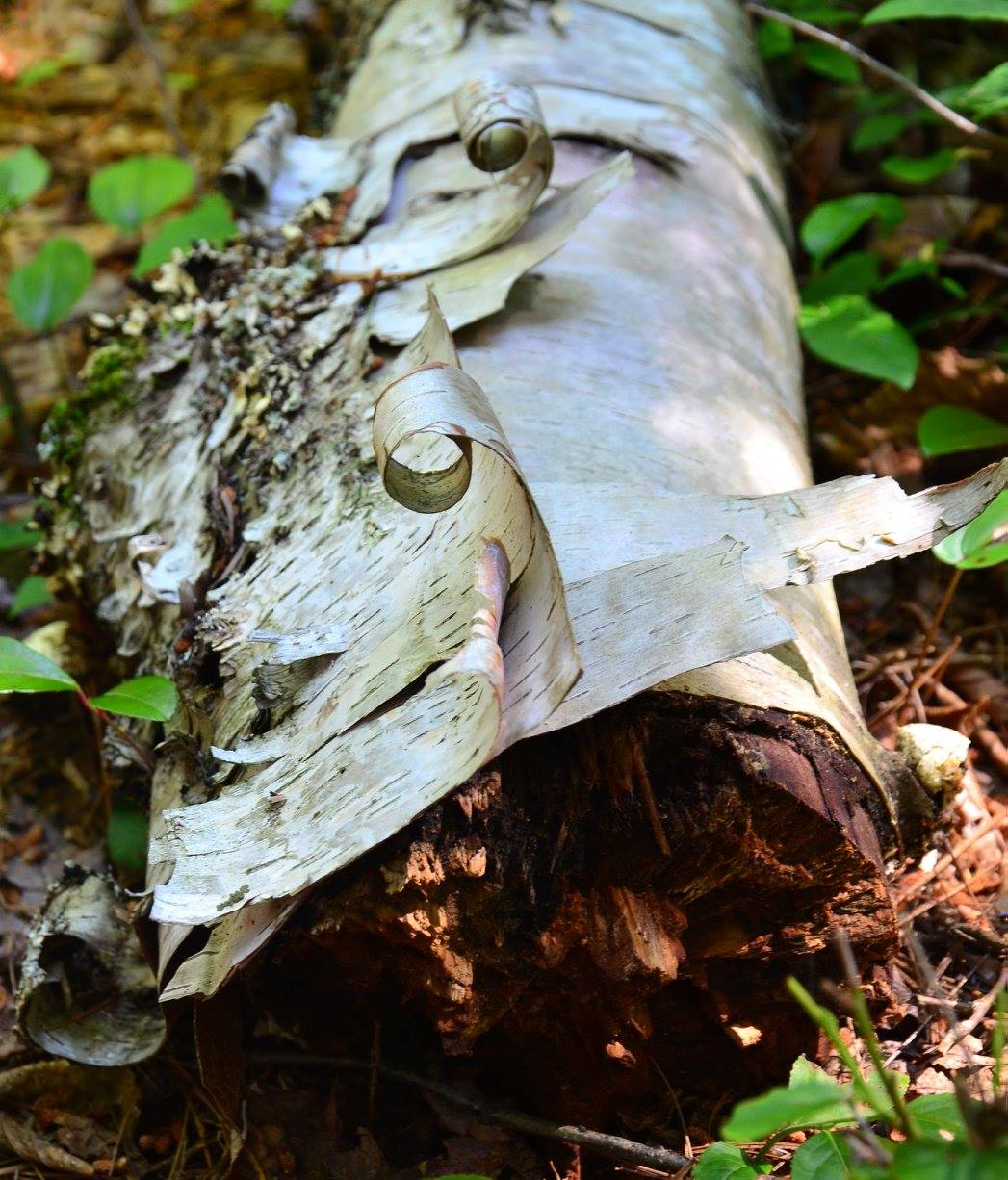 One of the best ways to explore the park is through the backcountry. I absolutely loved backpacking Pictured Rocks National Lakeshore. Well I didn’t love the plague of flies, but I’ll get to that later.

Lagena and I visited the park in late July. We did some day hikes and kayaking, but we spent three nights in the backcountry. 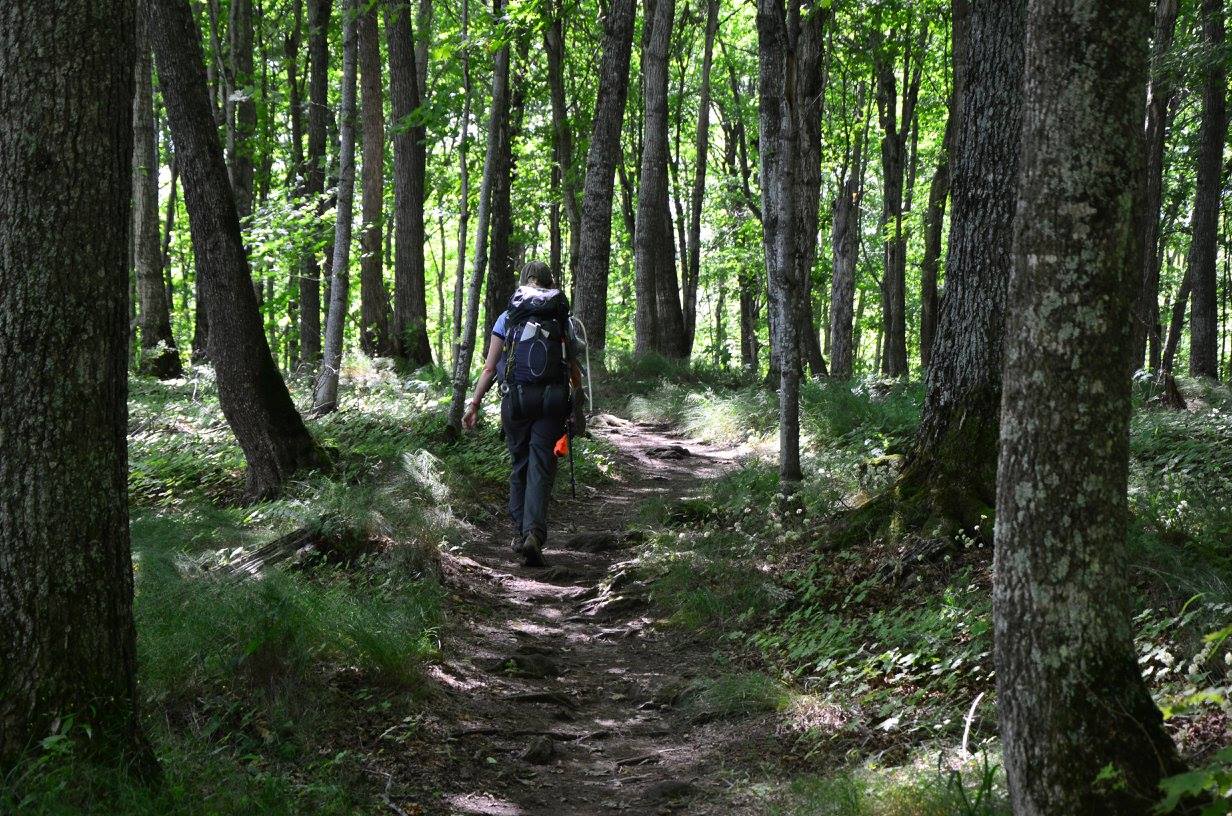 The trail we chose is part of the North Country Trail, which is a National Scenic Trail that spans about 4,600 miles.

When you backpack at Pictured Rocks, the park’s website highly suggests making reservations for your backcountry permits. This was the first time I made advance backcountry reservations. And I’m glad we did because each night our backcountry campsites were full. I’m not sure we would have been able to get the same backpacking trip had we waited until we got to the park. 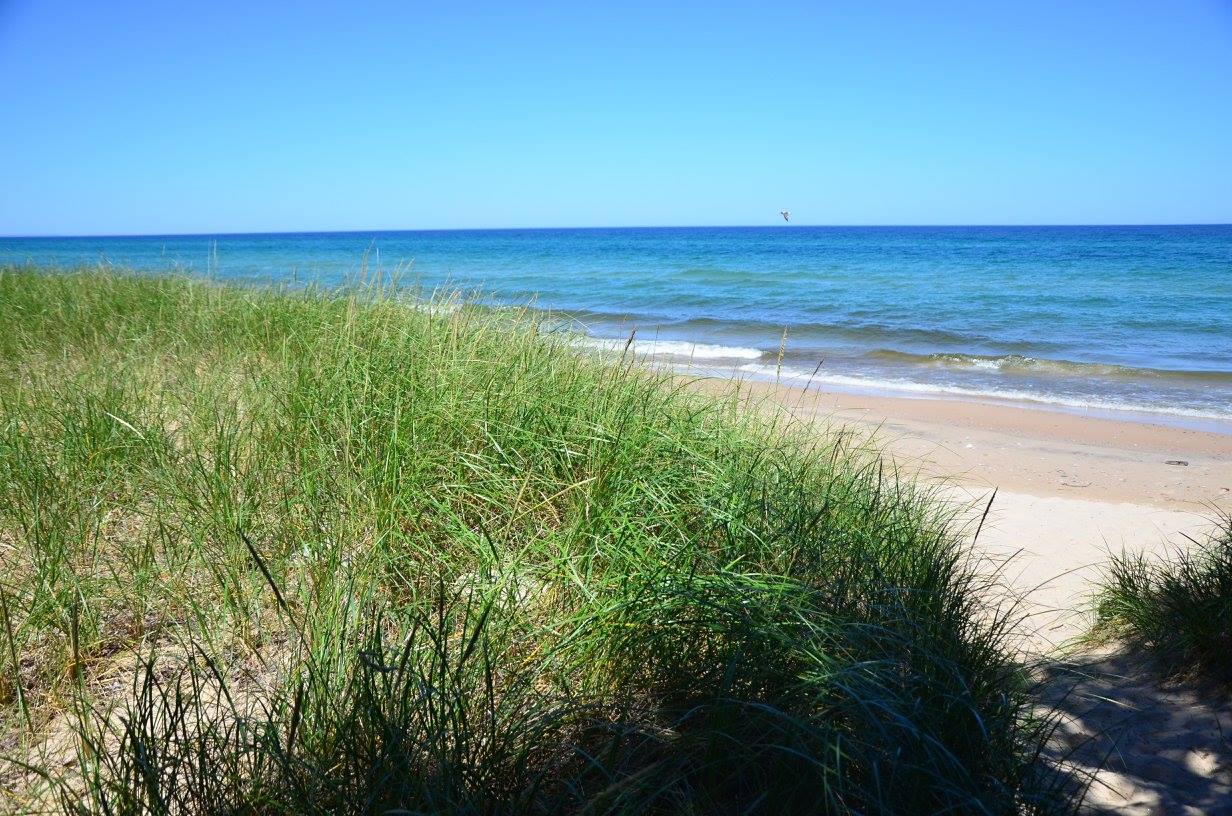 Most national parks only take backcountry reservations via fax or snail mail. Backpacking Pictured Rock National Lakeshore is no different, so I chose to mail my reservation. You also need to give yourself ample time to mail in the reservation and for them to mail it back.

If you are a visual person, like me, give yourself some time to plan out your trip. In the backcountry trip planner there is a mileage chart and a map. I wrote out the miles between each backcountry camping site on the map and plotted our course that way. You have to give them three itineraries in case your first trip is full. 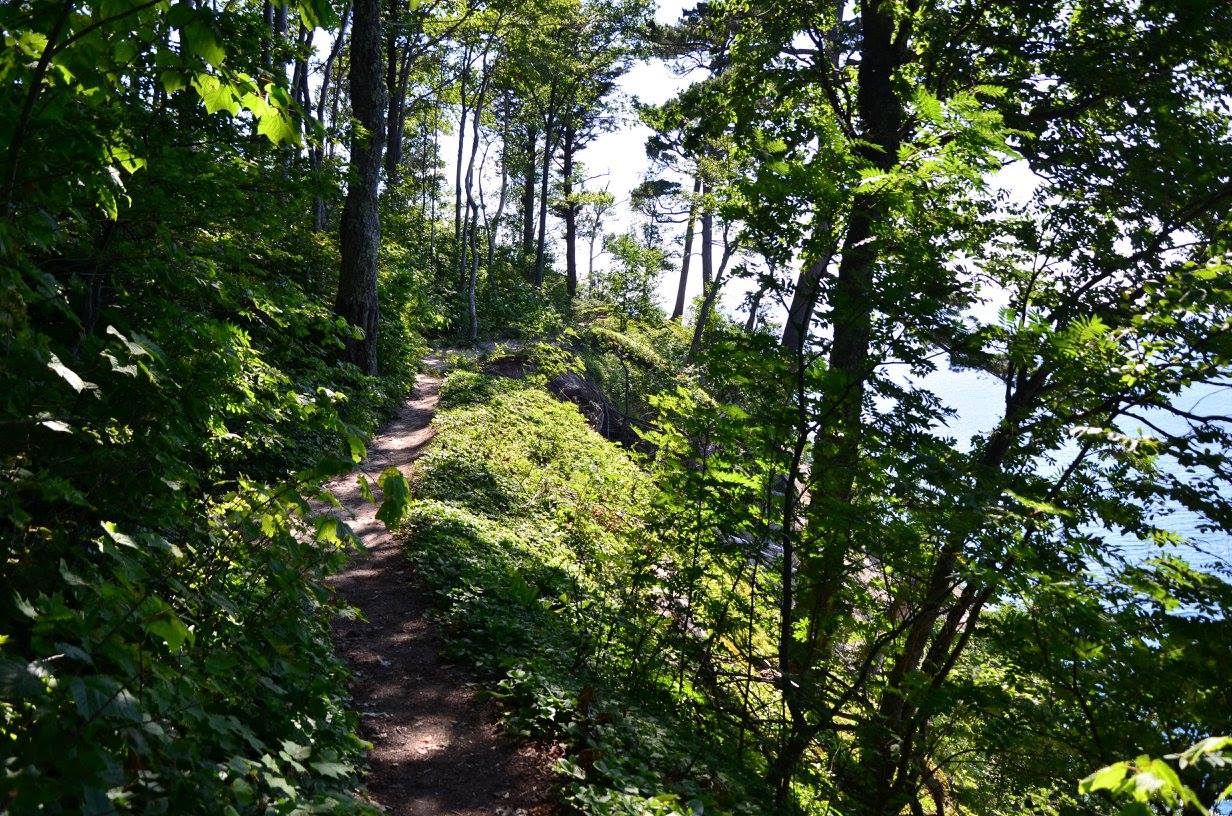 After about an hour, my eyes were crossing and I wasn’t sure I had three good itineraries picked out. I wrote a note that said I tried to give us between seven and 10 miles a day, but if I made a mistake then they could correct it.

We started our hike at Miners Castle and hiked east to Benchmark. A map of the park can viewed here. We parked at the end of our hike and rode the shuttle to the start of our hike.

Our first day of backpacking, we hiked from Miners Castle to Chapel Beach. This was our longest day with about a 9.5-mile trek. It was also my favorite day because the vistas were amazing. The scenery while backpacking Pictured Rocks lives up to all its promises. 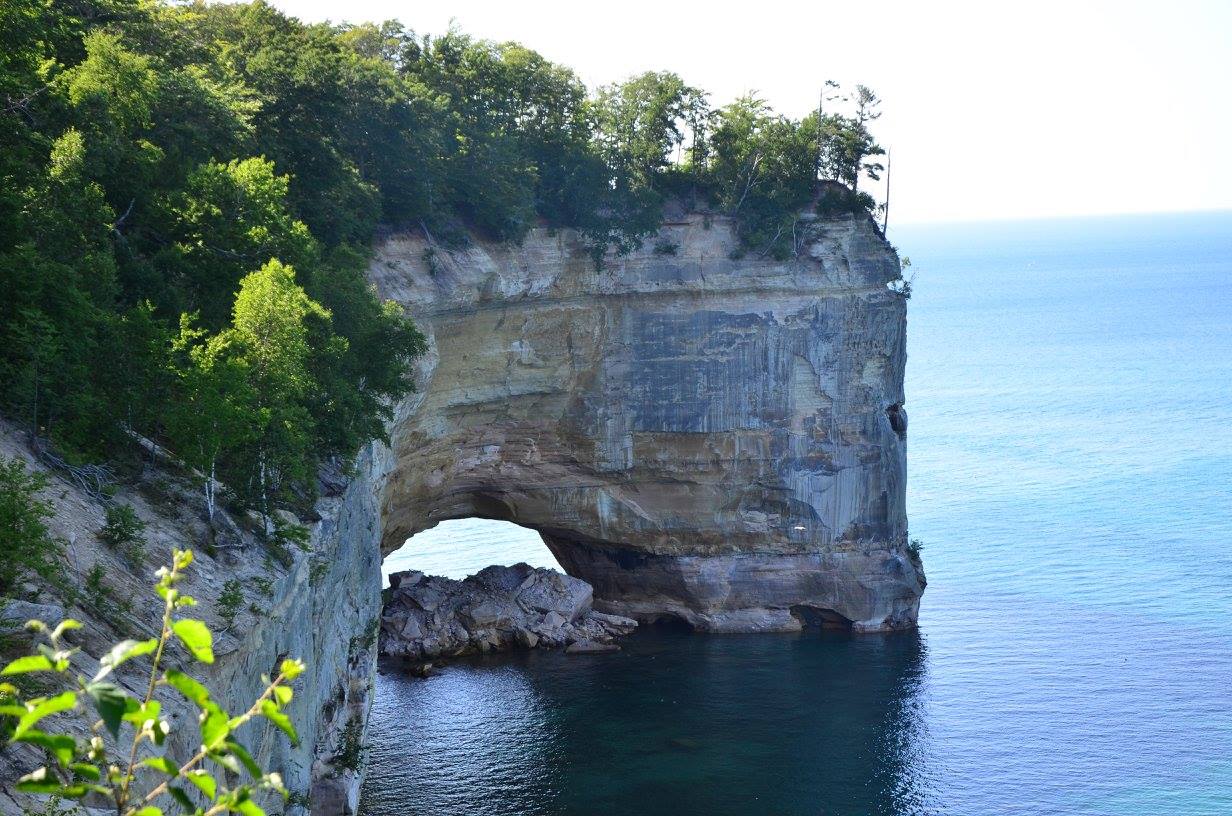 The hike starts out down hill toward Miners Beach. I knew we had some ups and downs, but I wasn’t sure how steep the trail was going to be. Going down hill made me nervous, because I knew we would climb back up. But none of the uphill parts of the trail were that bad. 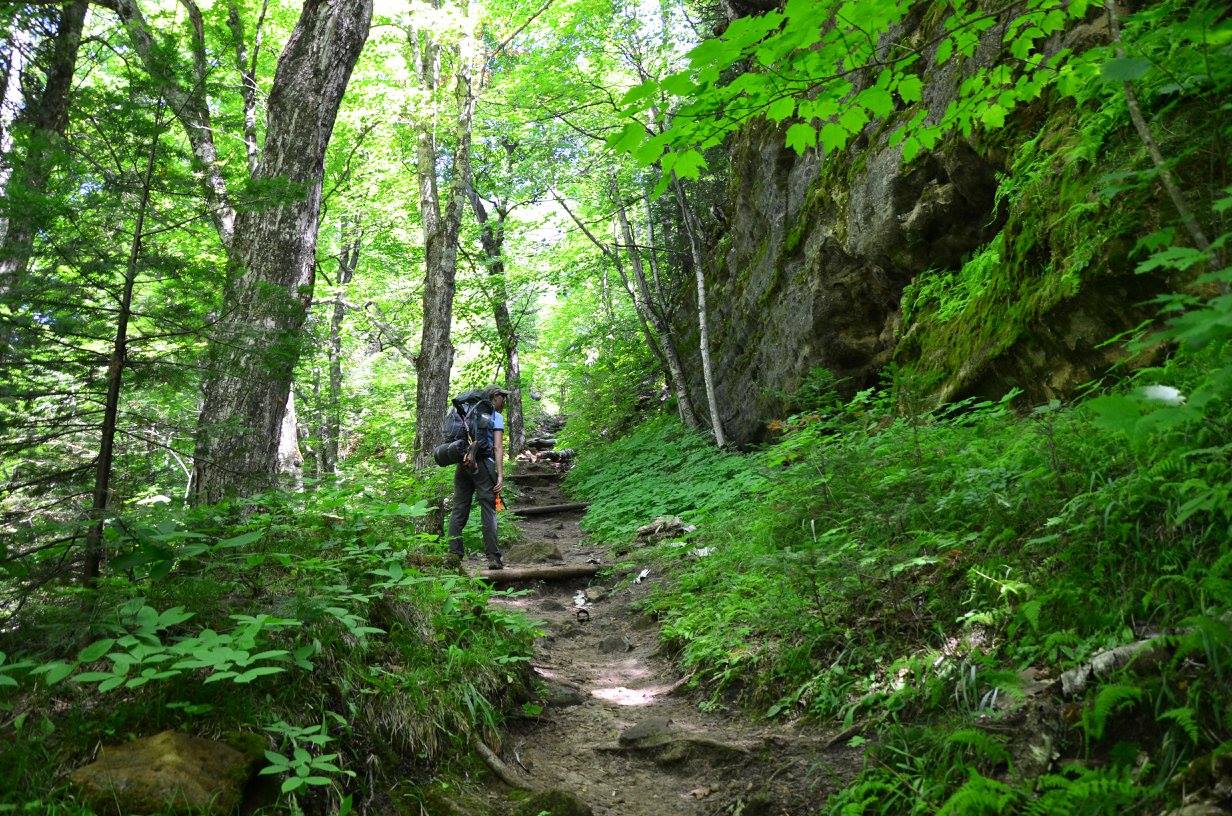 When we got to Miners beach, we hike through some loose sand, which is hard yo do with a pack. Using trekking poles helps you keep your stability and distributes your weight between your legs and arms. 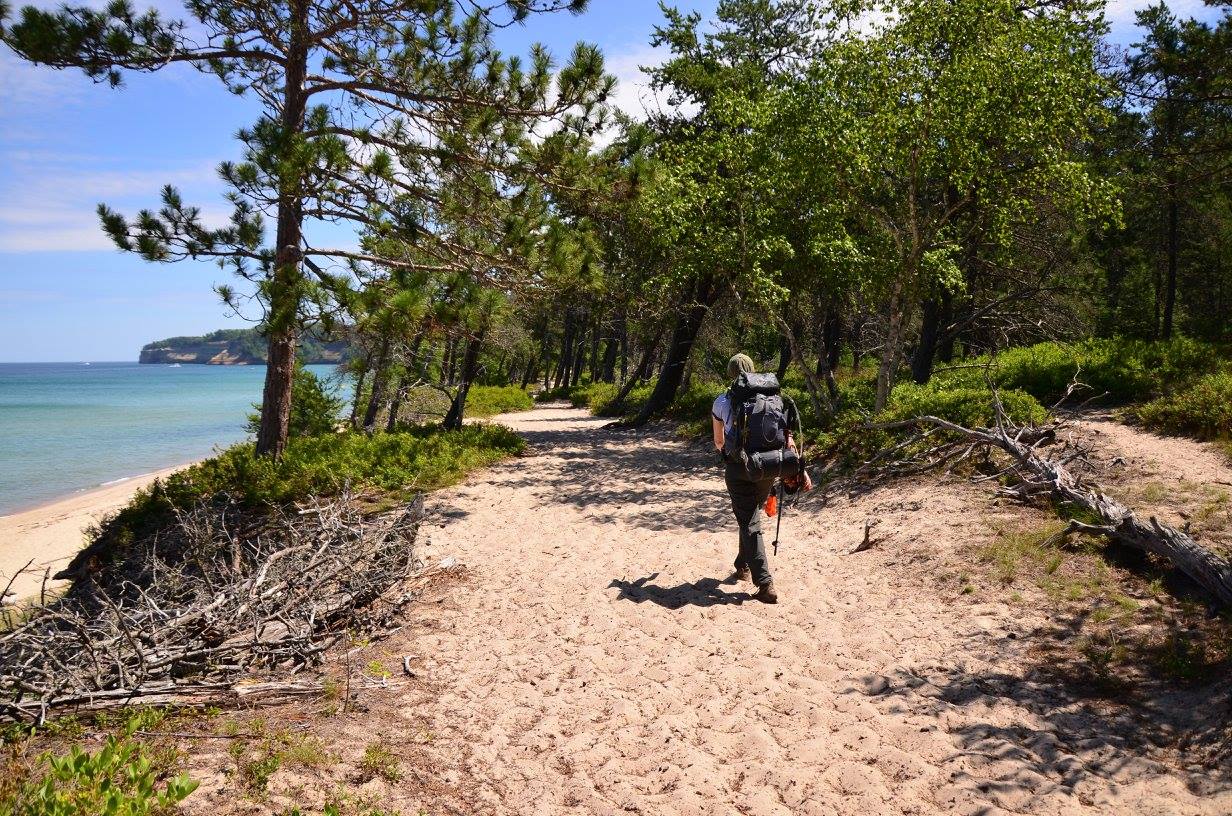 We then had a steep but short climb back to the top of the bluffs.

On the day before, we kayaked in Lake Superior below the same bluffs we were walking along. I loved getting two perspectives of the park. It was neat to see the unique rock structure that we kayaked in and around the day before from a top view. I also loved looking down on the kayakers that were exploring the lake on that day. 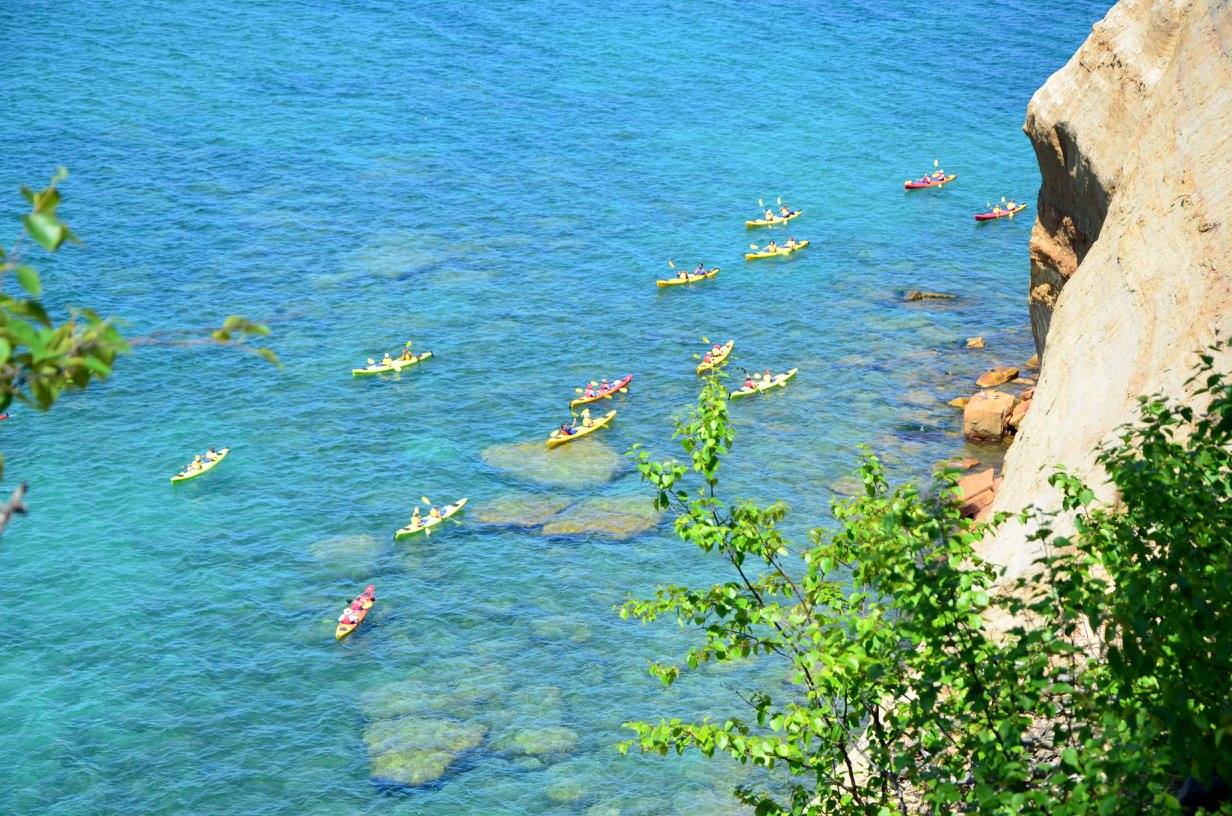 The water in Lake Superior is extremely clear. Our kayaking tour guide said that the water never gets warm enough for algae to grow. The white sandstone and clarity of the water made it look extremely blue. Lagena and I commented on how much the lake reminded us of the Caribbean.

In some places the trail was extremely close to the edge of the cliff, so be careful in these places. In other places there were spur trails. Some lead to excellent views, others not so much. 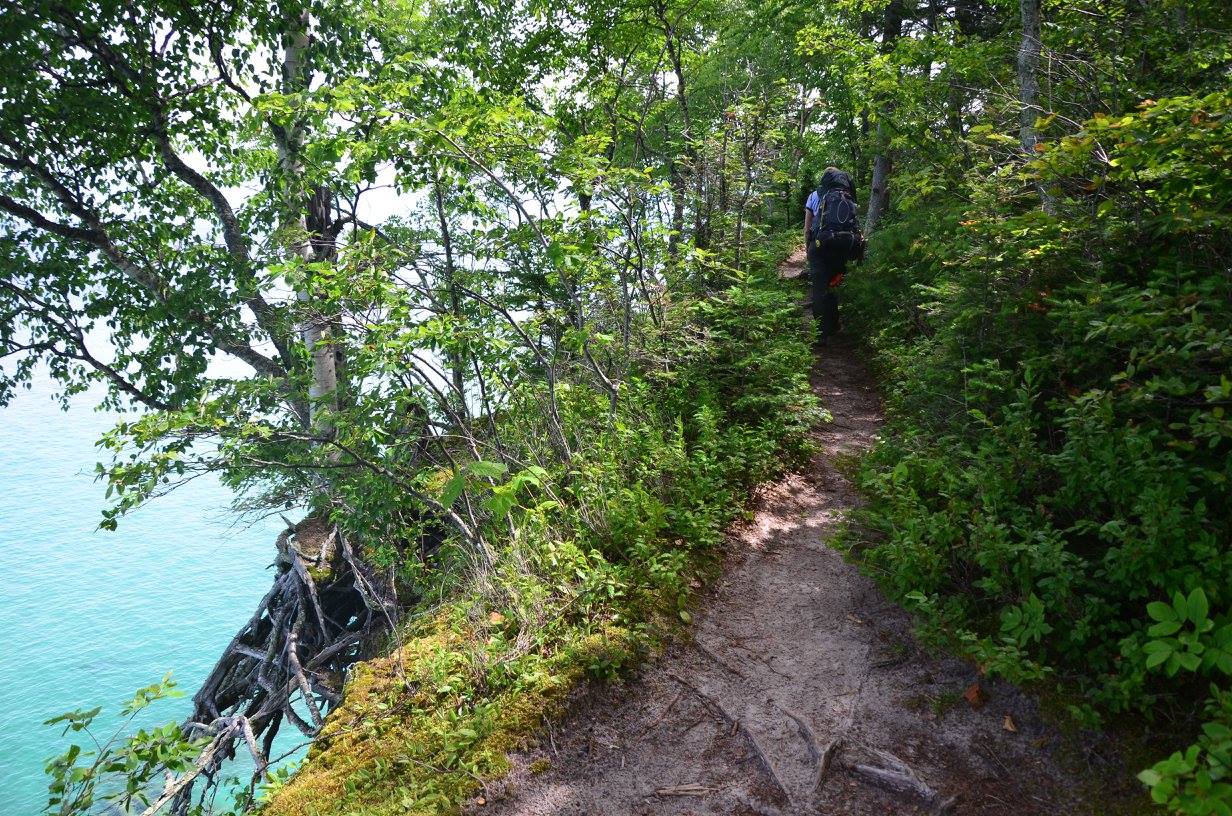 Plague of the flies

About 5 p.m. on our first day of backpacking Pictured Rocks, the flies started getting bad. They looked like black flies, but they bit and drew blood. We learned later that these are stable flies and are bad near water. And here we were hiking along the largest freshwater lake in the world – great.

At one point Lagena walked out onto a bluff; she was overtaken by the swarm of flies. And we both turned around and high-tailed it back to the trail. The rest of the hike, we walked twice as fast to get to our camp for the night. 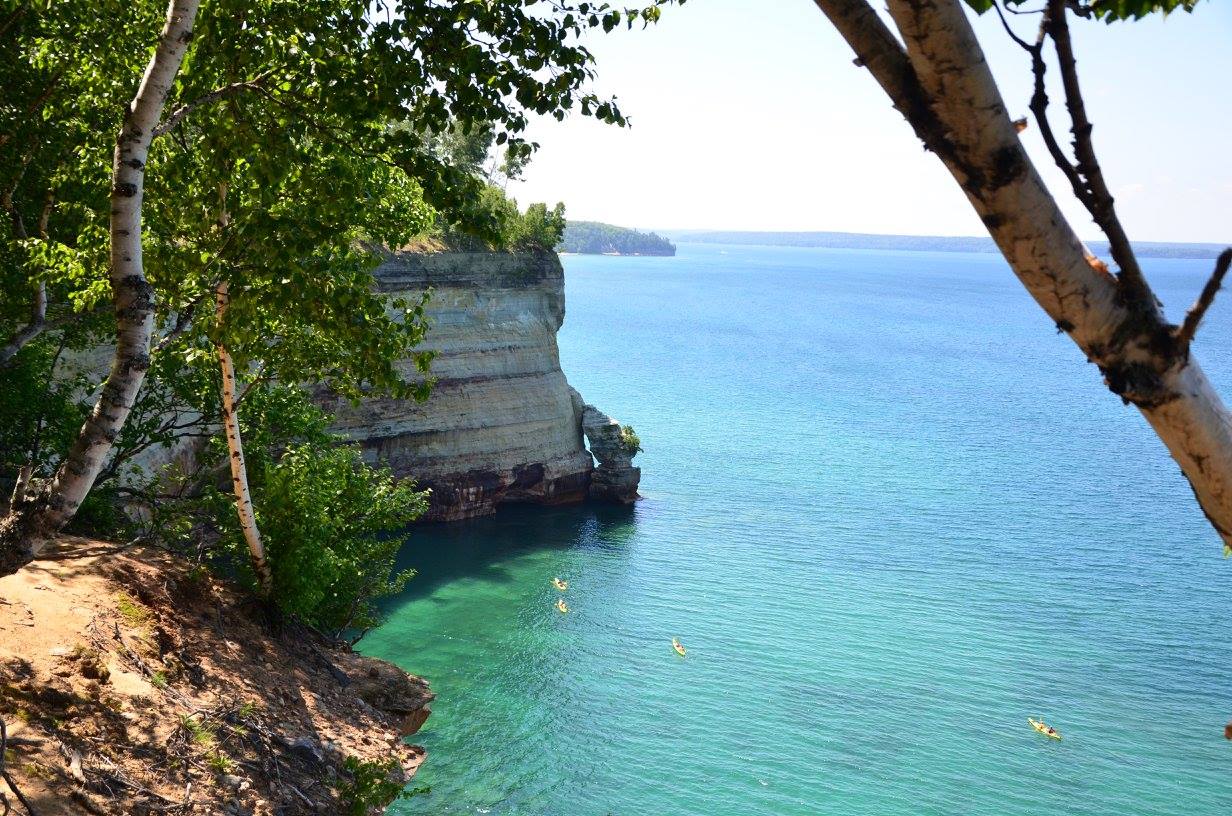 We made it to camp about 6 p.m., and the flies were murderous by that point. We set up the tent quickly. Instead of cooking dinner, we decided the peanut butter and jelly sandwiches we packed for lunches would be better. The less time in the flies, the happier we were.

We hurriedly put our food, cookware, and toiletries in the bear box. Then we rushed into the tent not wanting to let any flies in there with us. We failed. About 10 of the blood-sucking insects joined us in the tent. It took us an hour to kill them. 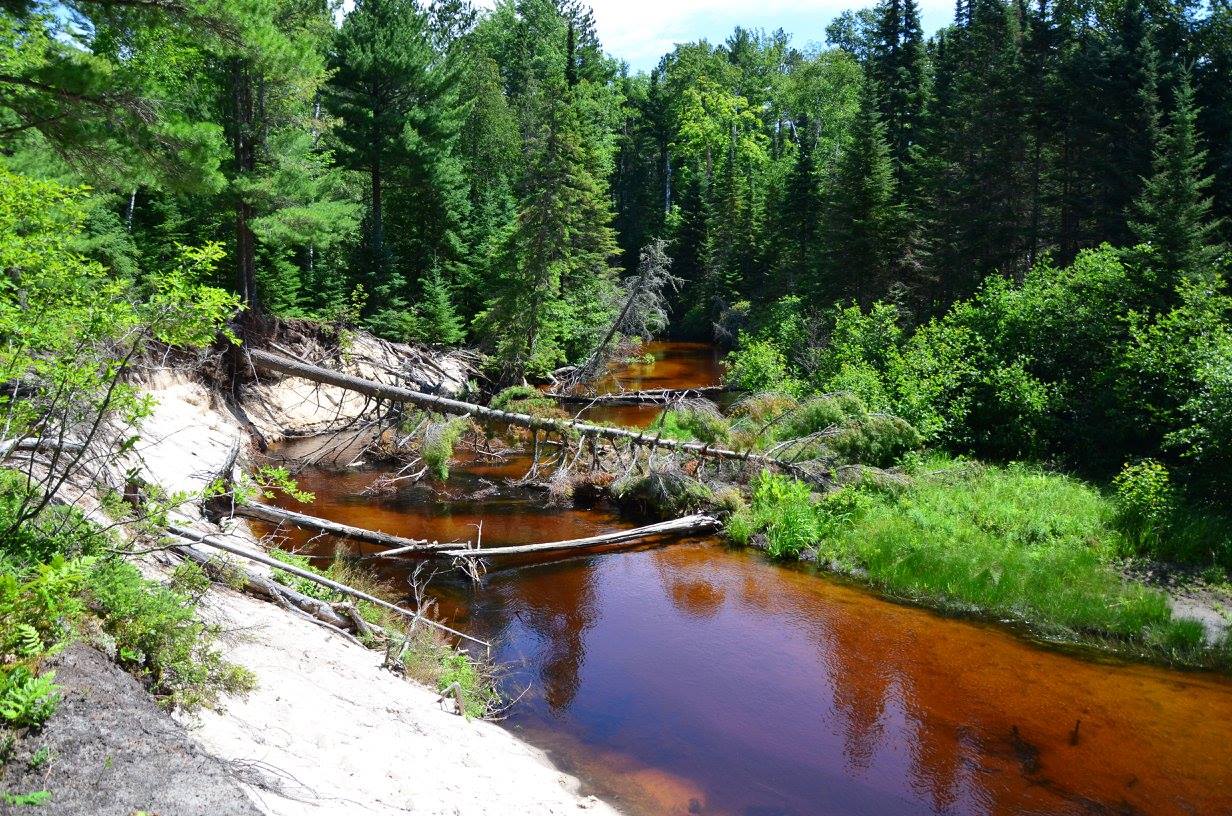 The worst part about them was when we slapped them against our skin, we only stunned them. We had to slap and roll them to crush them before they would die.

They were so bad that my leg from my knee to my ankle was literally black with flies. And when I finally got a shower a few days later, I’m pretty sure I had a dead one in my hair.

About 5 p.m. the next day, the flies had all flown somewhere else. And we were so glad that they were only a temporary annoyance. We learned later that when the winds are from the south, the flies are bad. 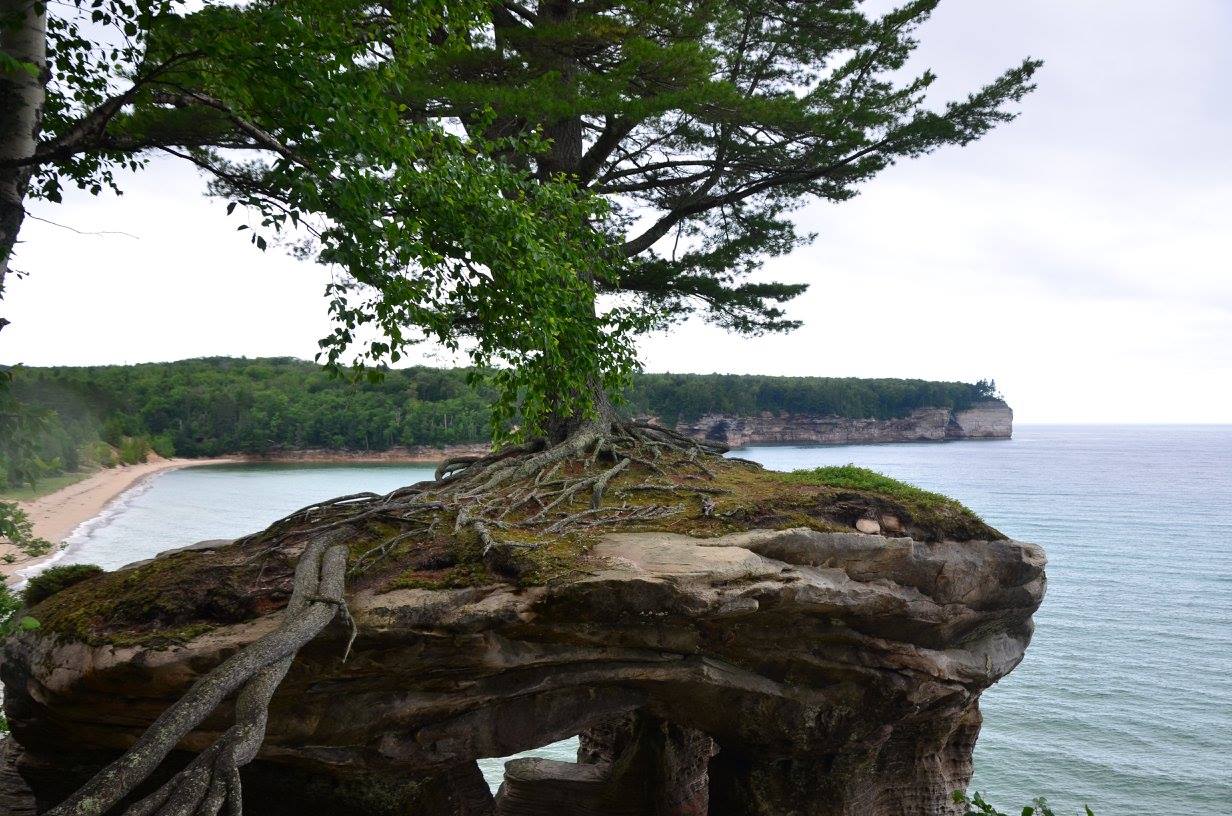 The next morning I awoke to thunder. I ventured out of the tent and battled the flies. I thought they would only be bad in evening time and would clear up in the night, but I was wrong. Breakfast was on my mind (as it usually is first thing in the morning), and I went to the bear box to retrieve our items. When backpacking Pictured Rocks, the campsite sites have bear boxes that are shared among the backcountry sites.

I couldn’t find the stove! I looked everywhere and eventually decided someone had taken by mistake. Hopefully no one would steal it. I got back to the tent and said, “I have bad news, bad new, and worse news.”

I told Lagena about the rain, the flies, and the stove. She looked everywhere in and around the bear box too, but we never found it. Lagena turned to me and said, “I’m not pleasant when I’m hungry.” 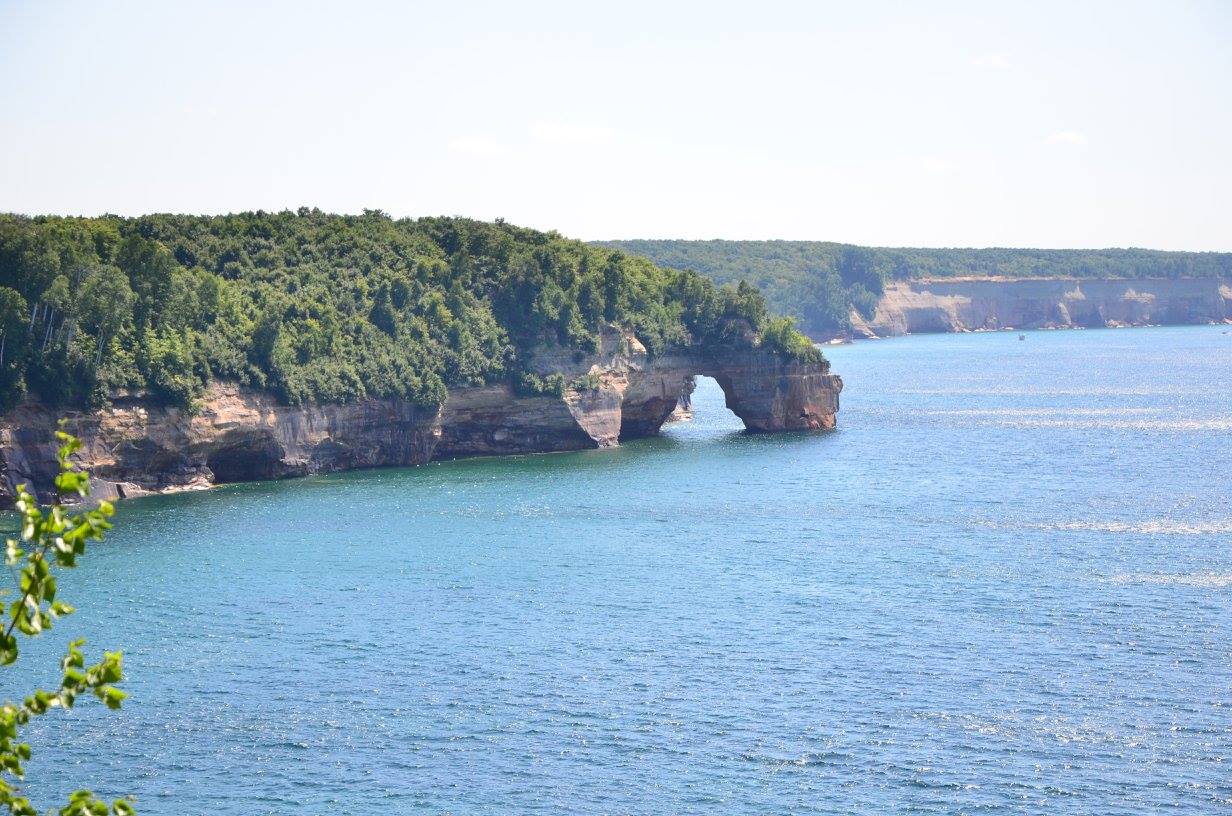 My mind was buzzing with ideas on how to survive without being able to cook in the backcountry. Too bad we ate our sandwich for dinner. I thought if worse came to worse we would just have to eat cold oatmeal.

Because we still had our fuel, we borrowed a stove from someone still sleeping (we would have asked had they been awak). We ate a Mountain House meal instead of oatmeal for more protein in cased we missed dinner.

Despite the fact that it was sunny with temperatures in the mid-80s, I wore long sleeves and pants to protect myself from the flies. They still bit through my shirt, but they weren’t as bad. Lagena stayed in her tank top and simply dealt with them.

I drained my three-liter CamelBak in a few hours. I was hot. 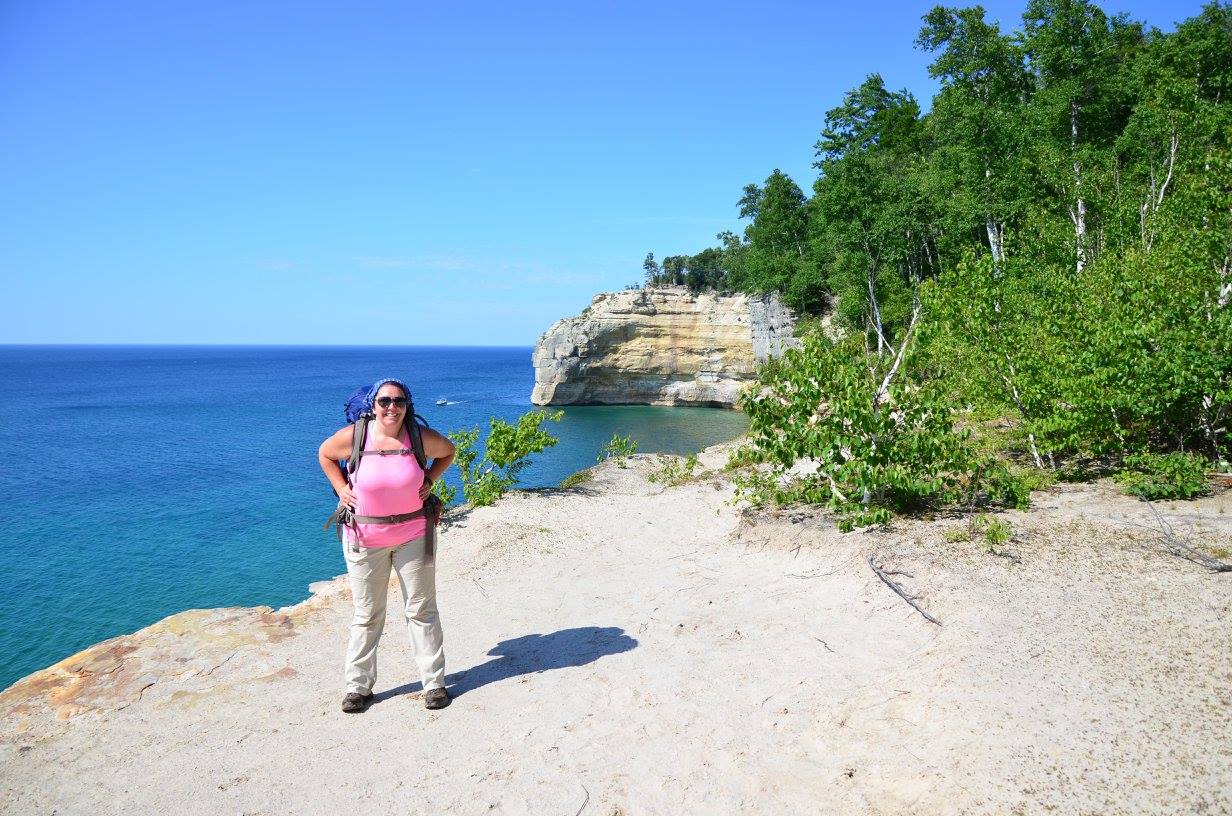 Our second day in backpacking Pictured Rocks, we hiked about seven miles from Chapel Beach to Pine Bluff backcountry sites. The trail followed the cliffs, but we had more ups and downs on this day. Some were steep but none were too long.

When we got to Spray Falls, we walked out on the bluff to view the waterfall. Despite the fact that the flies were worse on the bluff, the falls were too beautiful to not take a break there. 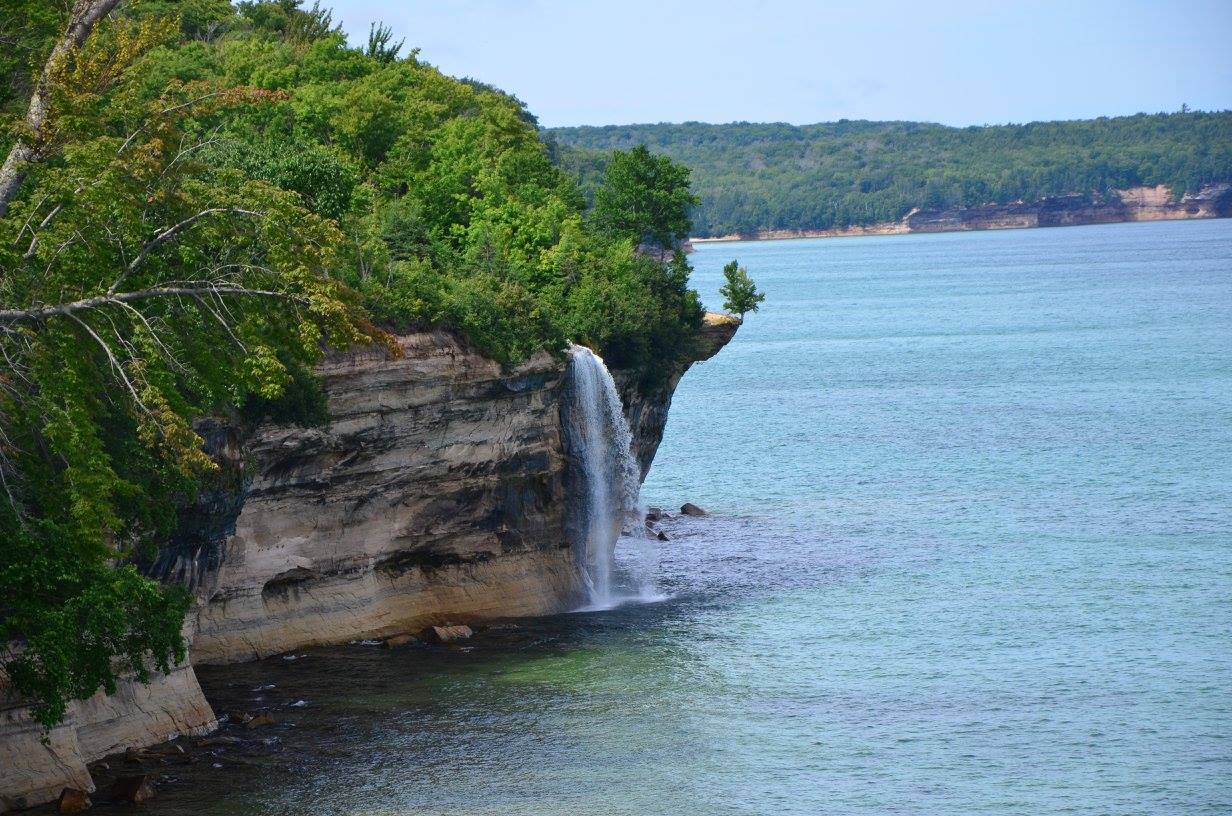 When we came to Beaver Creek backcountry site, we got a little confused on which way the trail went. 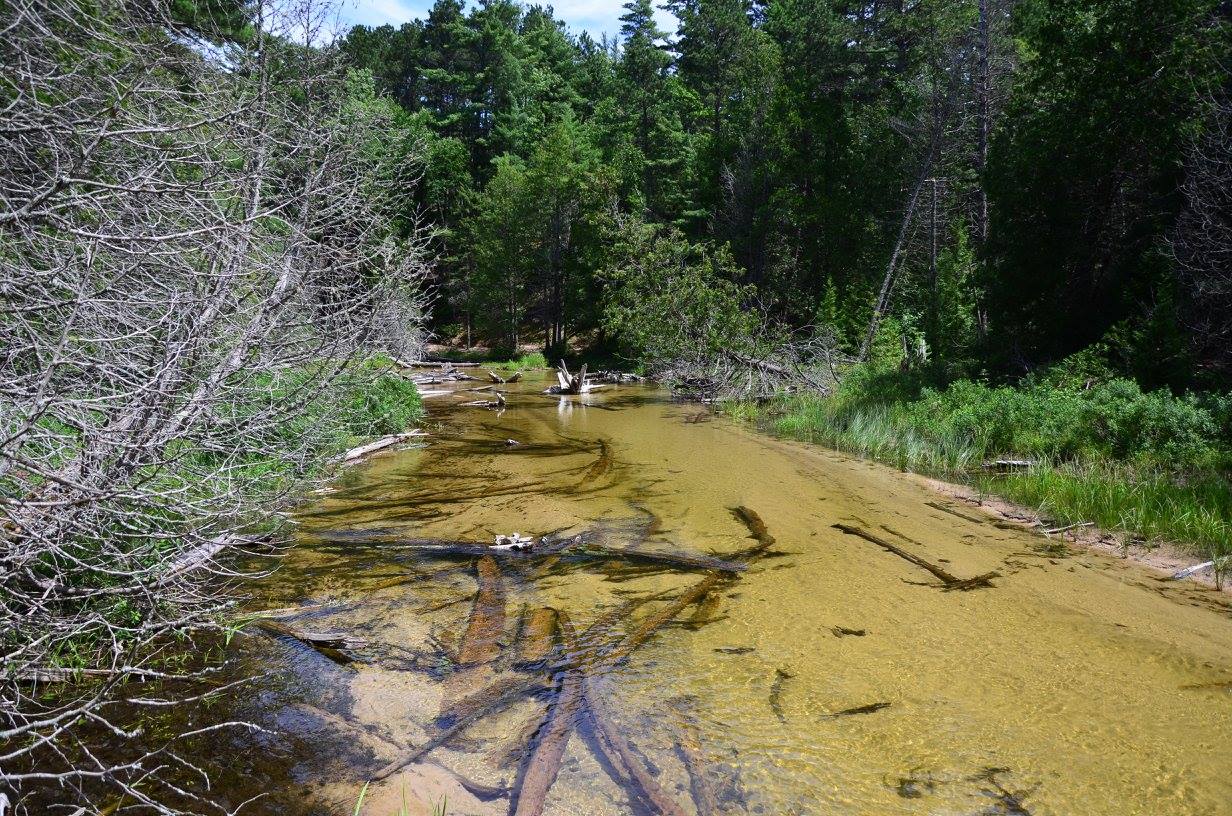 When backpacking Pictured Rocks, all the trail junctions are well marked with signs. We followed the North Country Trail sign but the trail became thin, so we wondered if we had gone the right way, which we had.

The trail follows the beach, and we were soon at Pine Bluff. We set up the tent, got in, and took a nap to get away from the flies. When we woke up, they were gone.

We were able to borrow a fellow camper’s stove (with permission this time) for our dinner and breakfast, so we did not starve.

The water source at Pine Bluff was Lake Superior. This is not an easy way to get water. I had to wade out into the lake because the waves kept dragging the filter along the sand. And when I got deep enough, the water was still fairly sandy. I hoped it wouldn’t clog the filter. 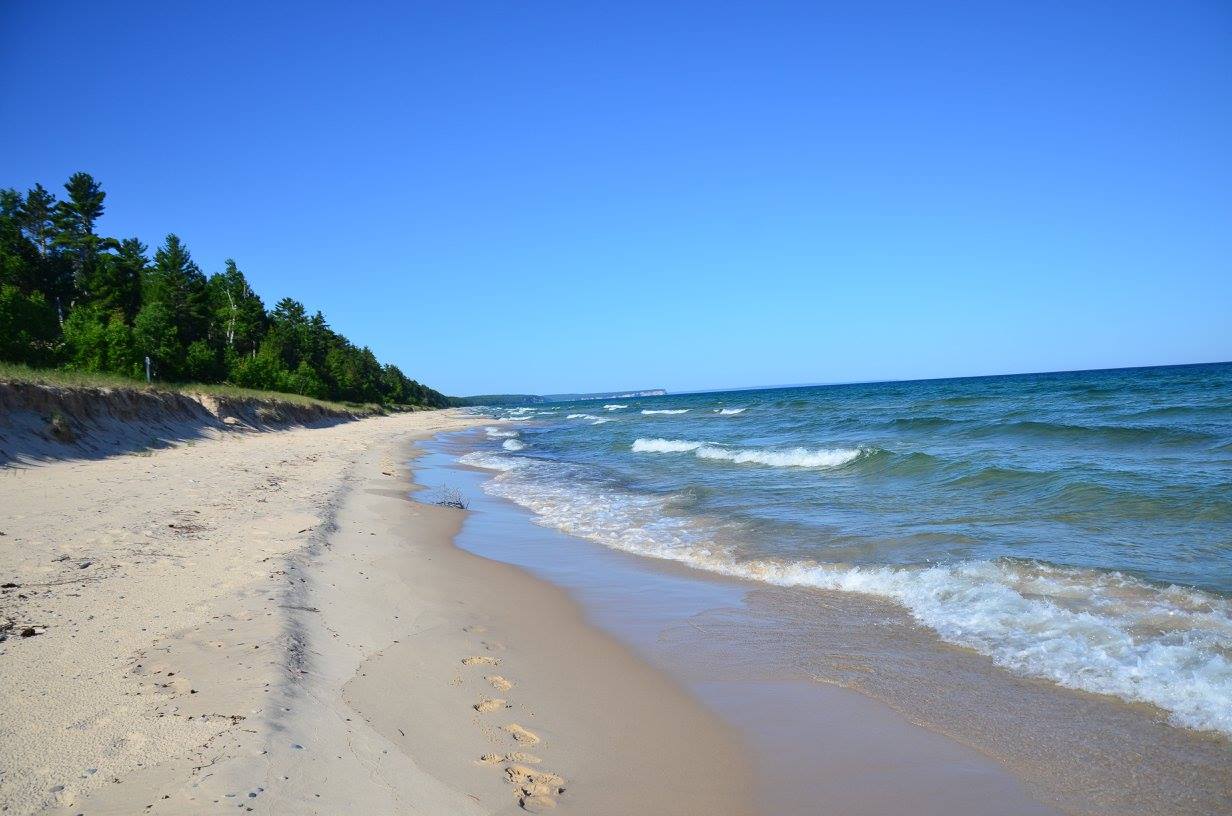 Our last day backpacking Pictured Rocks, we hiked from Pine Bluff to Benchmark. Benchmark was 0.3 miles farther from where we left the car, so we were able to get my stove for that night’s dinner as we passed the car.

We hiked about another seven miles to Benchmark. The trail follows what I assume is Twelvemile Beach and was mostly through the woods. It was easy hiking as it is fairly level. There is some soft sand to hike through, but it does not last long.

When you get to Twelvemile Beach car camping site, the trial follows the road for a little ways.

We ate lunch at the picnic area where the car was parked. It was glorious to not eat backcountry food. 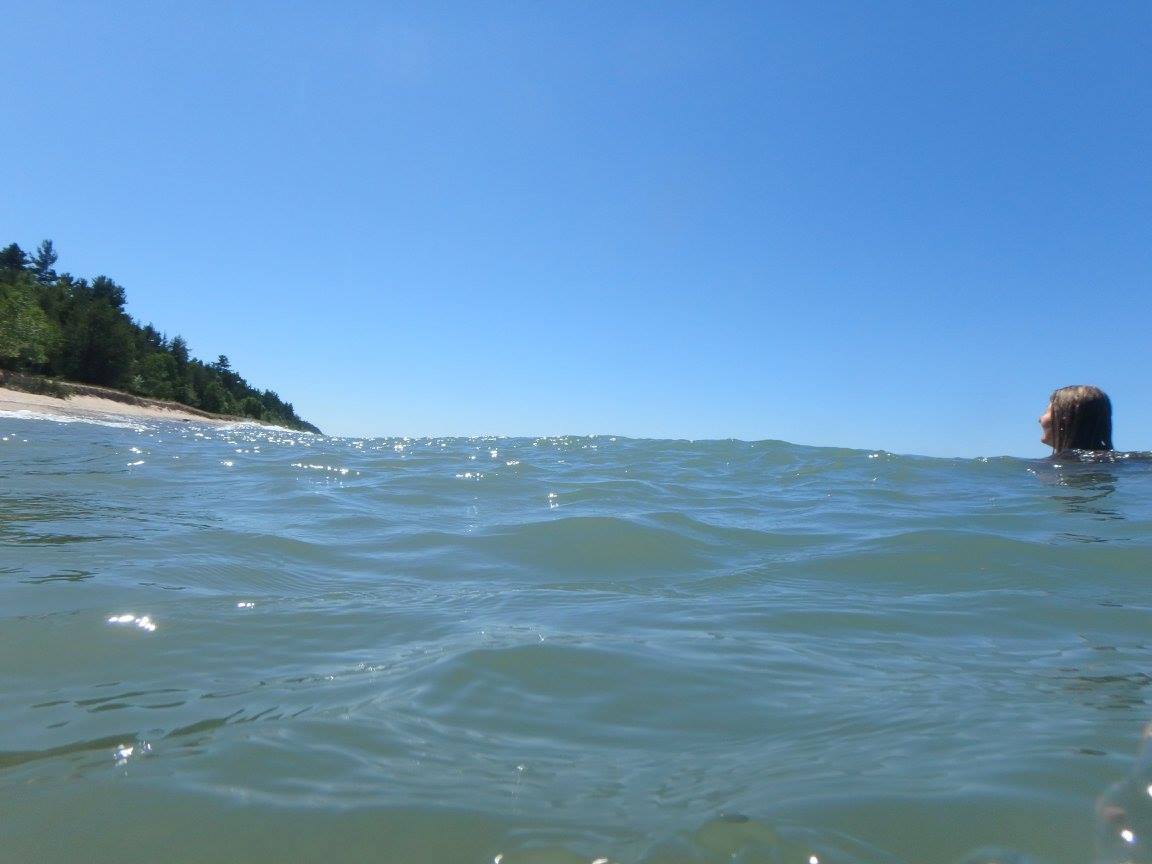 After we set up camp, Lagena and I went swimming in Lake Superior. Let me tell you, it was cold. But it was nice to ice our muscles. We only stayed in the water about 10 minutes. We lay out on the beach for some time. It was the best way to end a backcountry trip. We were so relaxed, soaking up the sun. 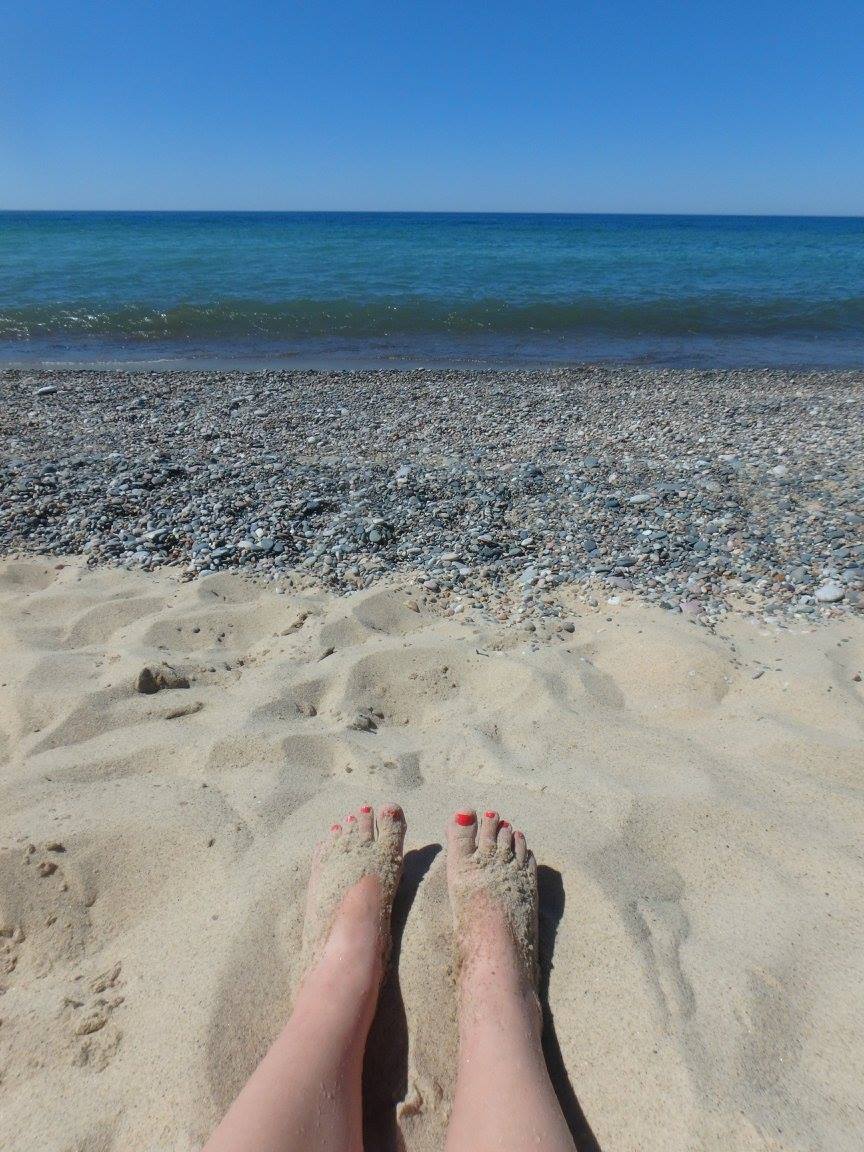 Because we could resupply at the car, we grabbed our hammocks. After spending time on the beach, we lounged in our hammocks at the campsite – also very relaxing. 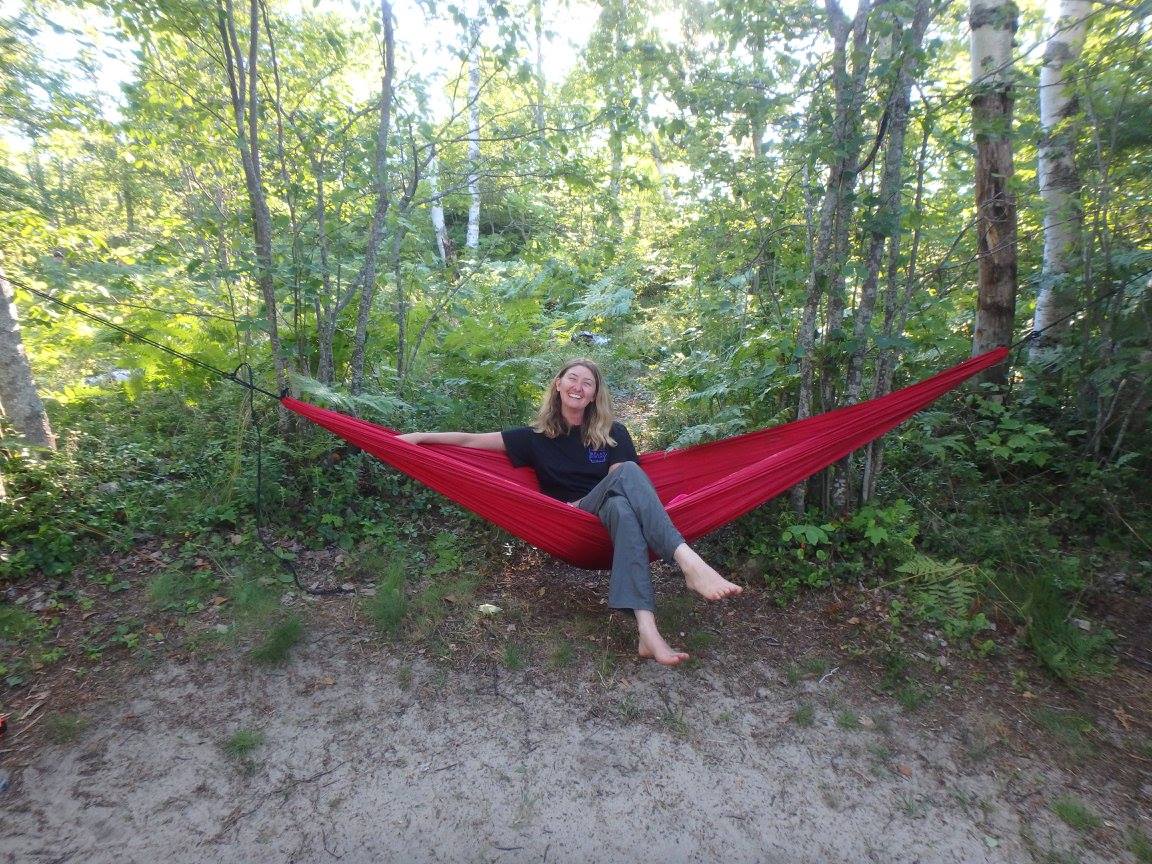 Backpacking Pictured Rocks is amazing. The backcountry is beautiful and well worth the hike, even with the flies. I greatly enjoyed hiking along a segment of the North Country Trail. The trail is fairly level and easy hiking, and the scenery is breathtaking. 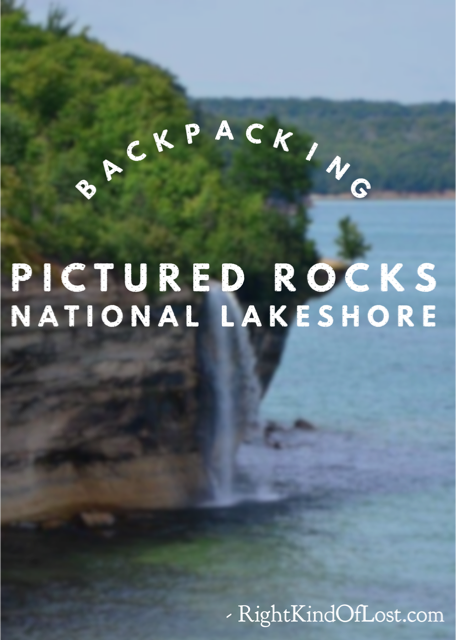