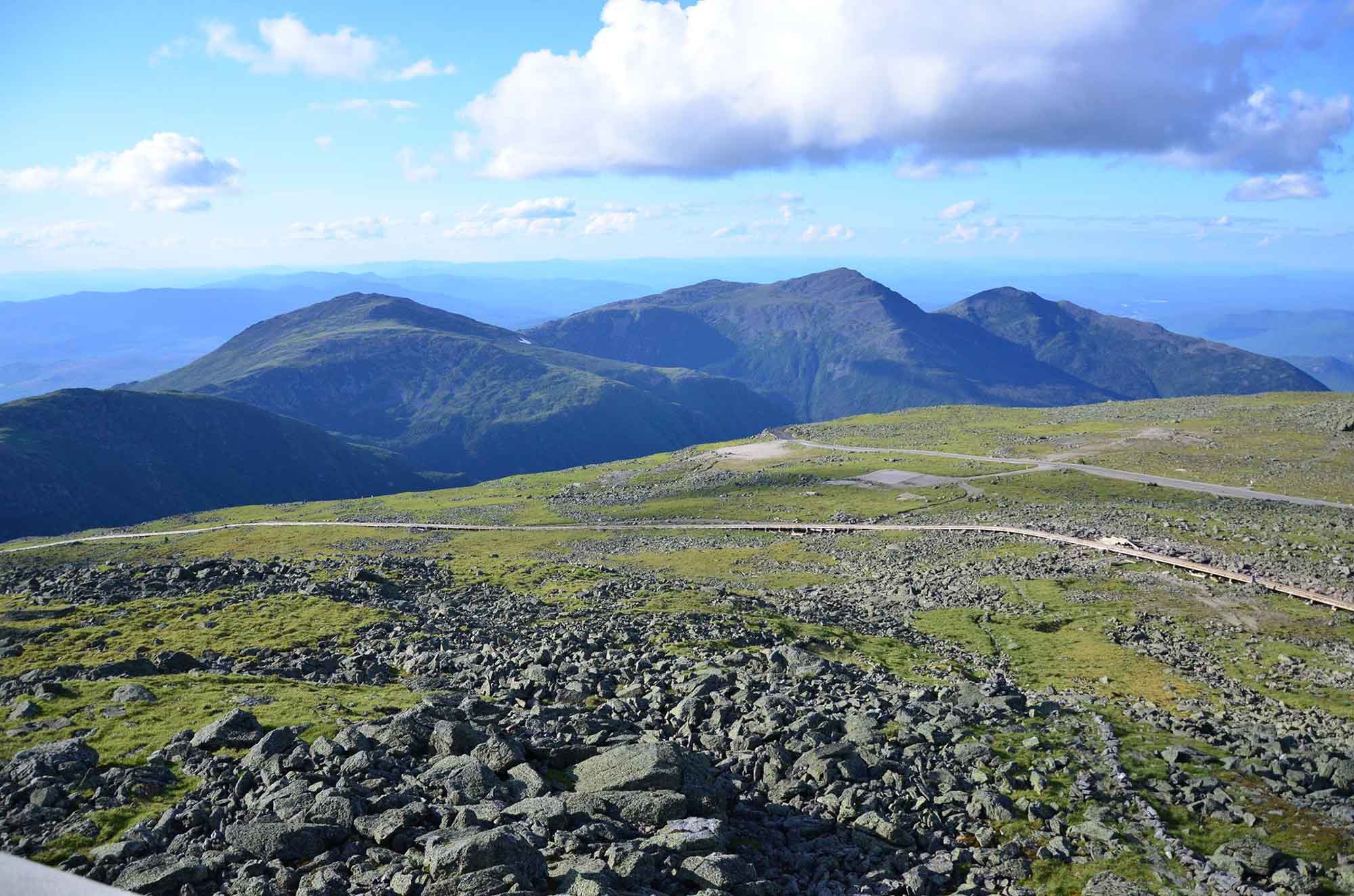 Have you ever had one of those trips where nothing seems to go according to plan? My recent trip to the White Mountains in New Hampshire was one of those trips. We were supposed to hike the north part of the Presidential Traverse, but didn’t even make it halfway up Mount Washington.

There were several factors that went into our decision to pull the plug on our hike. Bad moods, personal fights, and constant boulder scrabbling zapped our energy. It did not make for a good time.

The original plan was to spend four days and three nights in the backcountry. We were gong to begin our hike at Pinkham Notch Visitors Center, hike to Osgood tent site, then hike to The Perch shelter. From there hike the ridge line to Mount Washington and down to Hermit Lake Shelters. We would then hike back to Pinkham Notch. 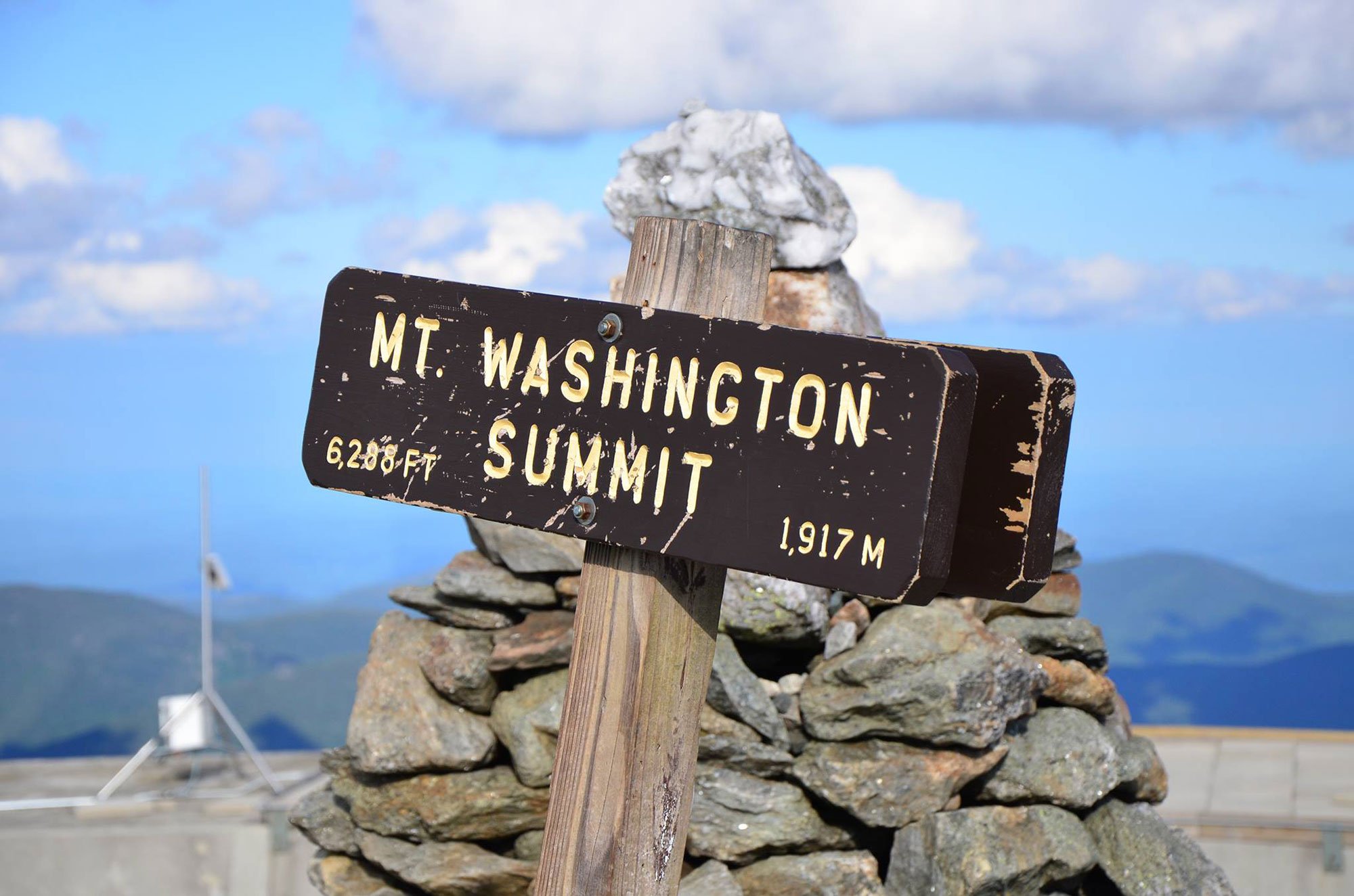 There are shuttle services so we did not have to loop it, but I wanted to have an option to bail. I was a little leery about what I had read about the Presidential Traverse. Had we hiked an end-to-end with a shuttle, we would be committed to the trail once we started.

If you don’t want to carry your tent and other heavy backcountry necessities, the Presidential Traverse has a series of huts you can sleep in, which are like hostels. They cost around the $100 mark, so we opted to save money and camp in our tent.

Backcountry camping in the Presidential Traverse

If you don’t want to pony-up for the huts, there are a few backcountry campsites and shelters. Backcountry camping is not allowed above the tree line. So if you are on the ridge, you either have to stay in a hut, or hike below the tree line to set up camp. 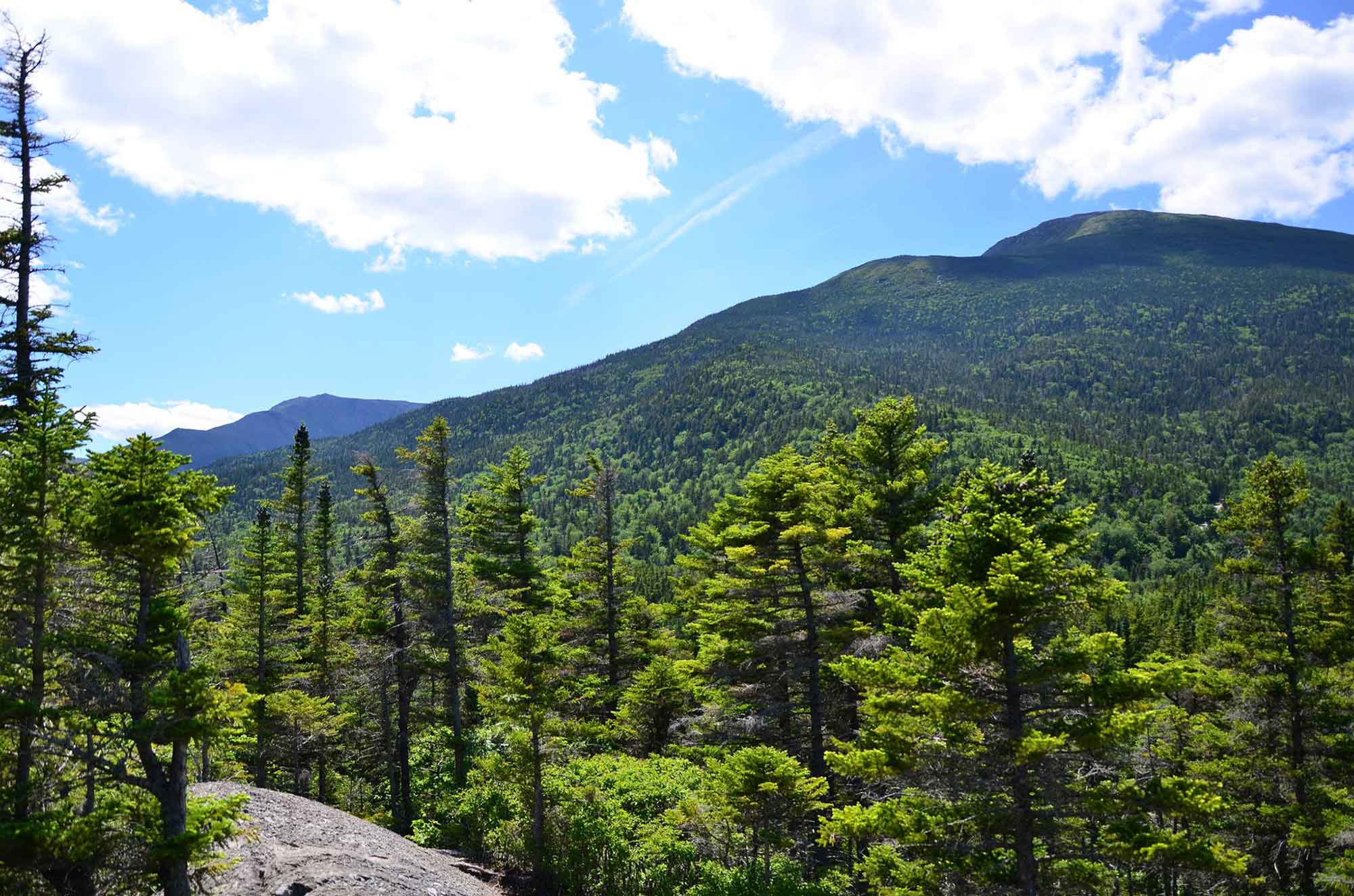 However, the woods are thick, and the terrain is steep. Good backcountry sites are few and hard to come by. I would suggest sticking to a designated spot so you know you have a comfy place to sleep for the night.

Condition of the trails in the White Mountains

New Hampshire trails are no joke. It wasn’t the elevation gain that kept us from continuing but the ruggedness of the trail. When they say there is boulder scrambling, they don’t mean some big rocks here and there. They mean if you hike these trails, you will be climbing up and over large boulders frequently. 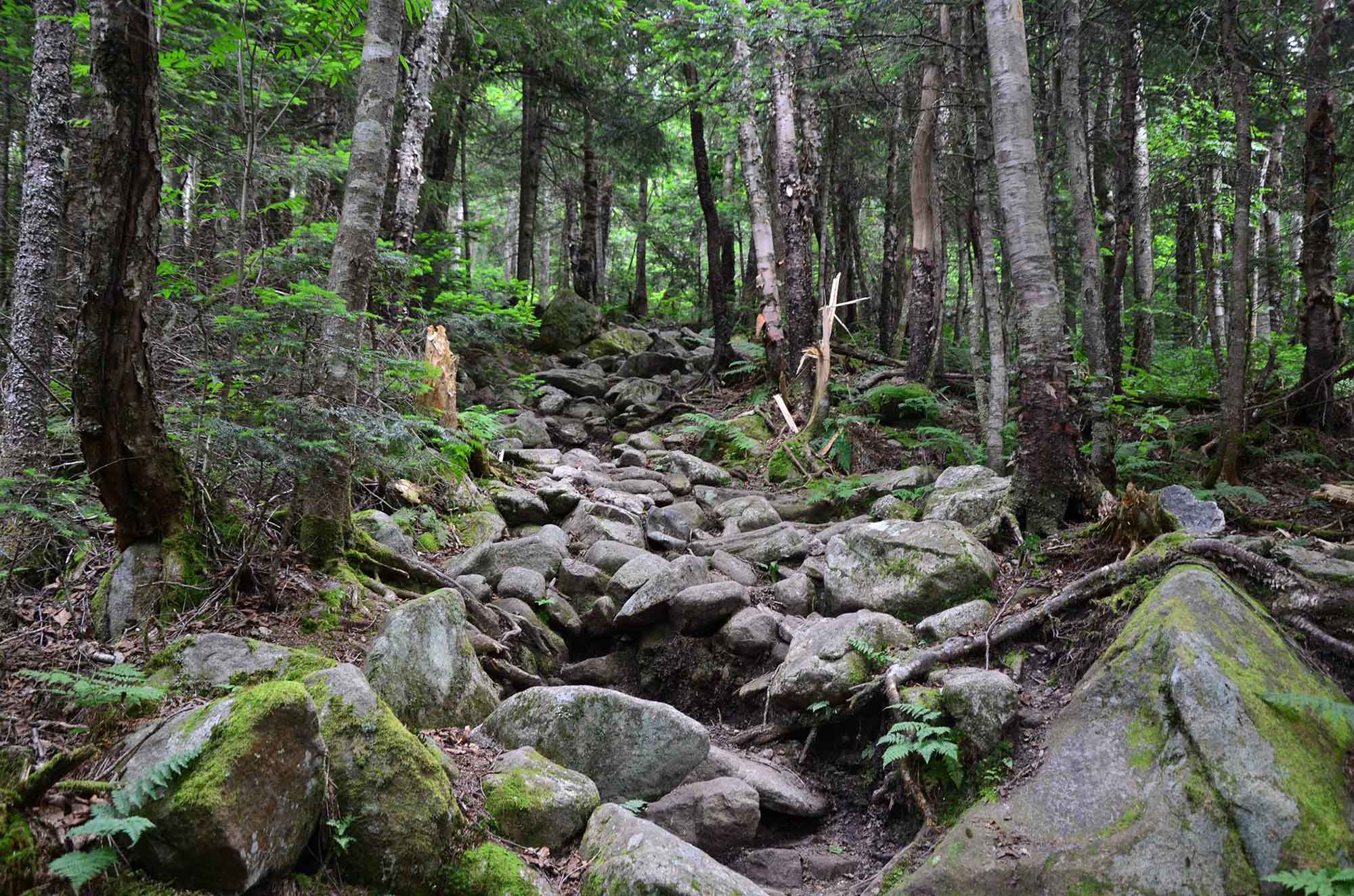 We hiked with our hands almost as much as our feet. When you are carrying 30 pounds on your back, scrambling up boulders and balancing on smaller rocks takes a lot of energy. And if you are not used to hiking on those kind of trails, that extra used energy is draining. 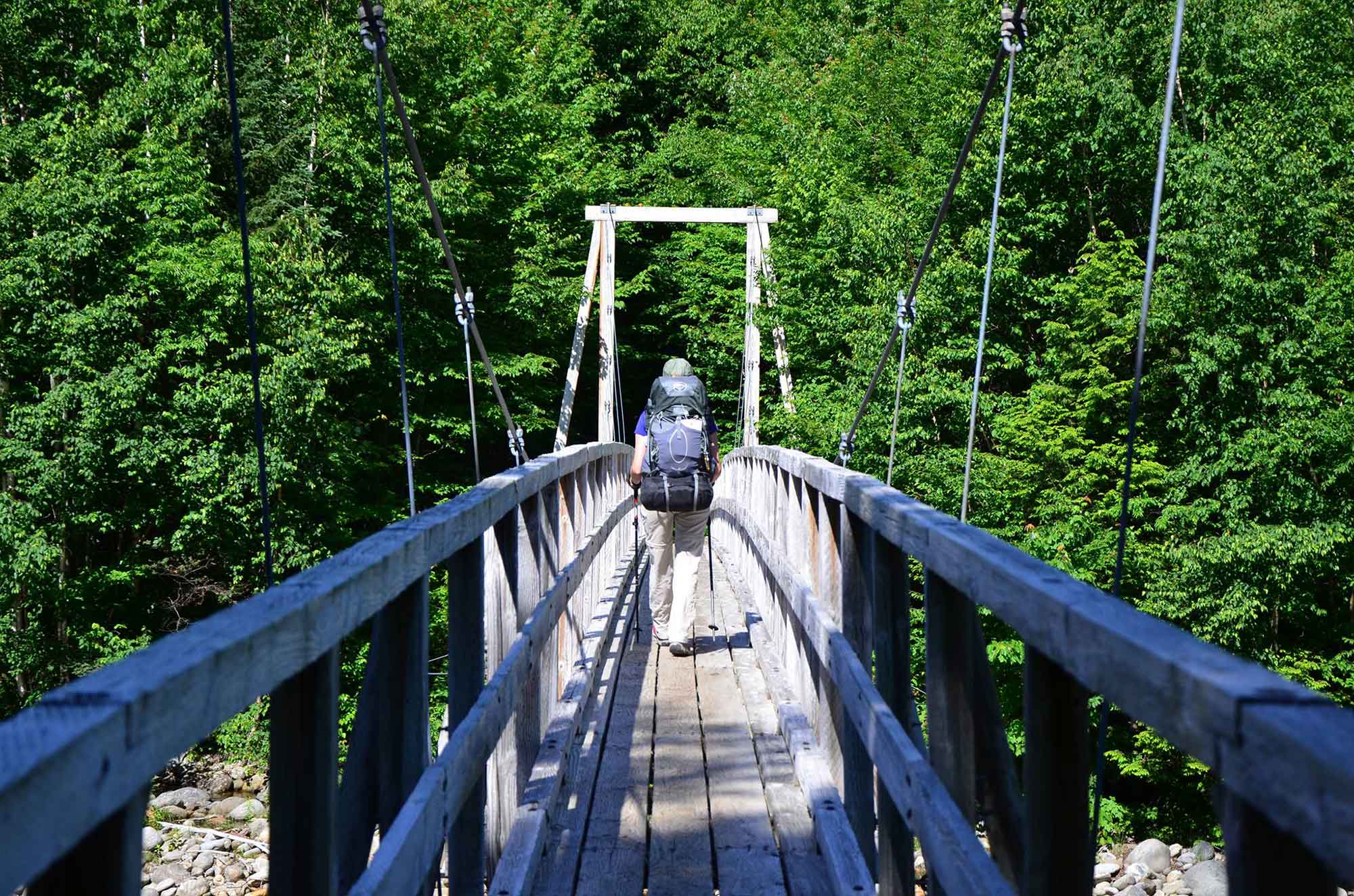 As we walked along the Appalachian Trail in the valley of the Presidential Range, which parallels the ridge, there were several rocks we had to climb up and over. By the third one of these rocks, Lagena said she was done and didn’t want to continue on the backpacking trip. So we walked along the Mount Washington Auto Road, back to the highway, and then back to my car.

Bailing on the second hike

After we bailed on our backcountry hike, we went back to our car camping site and decided to try a day hike to the ridge the next day.

Feeling a little wimpy, we chose to hike the Capps Ridge Trail because it was the shortest and had the least elevation gain. That was a mistake. 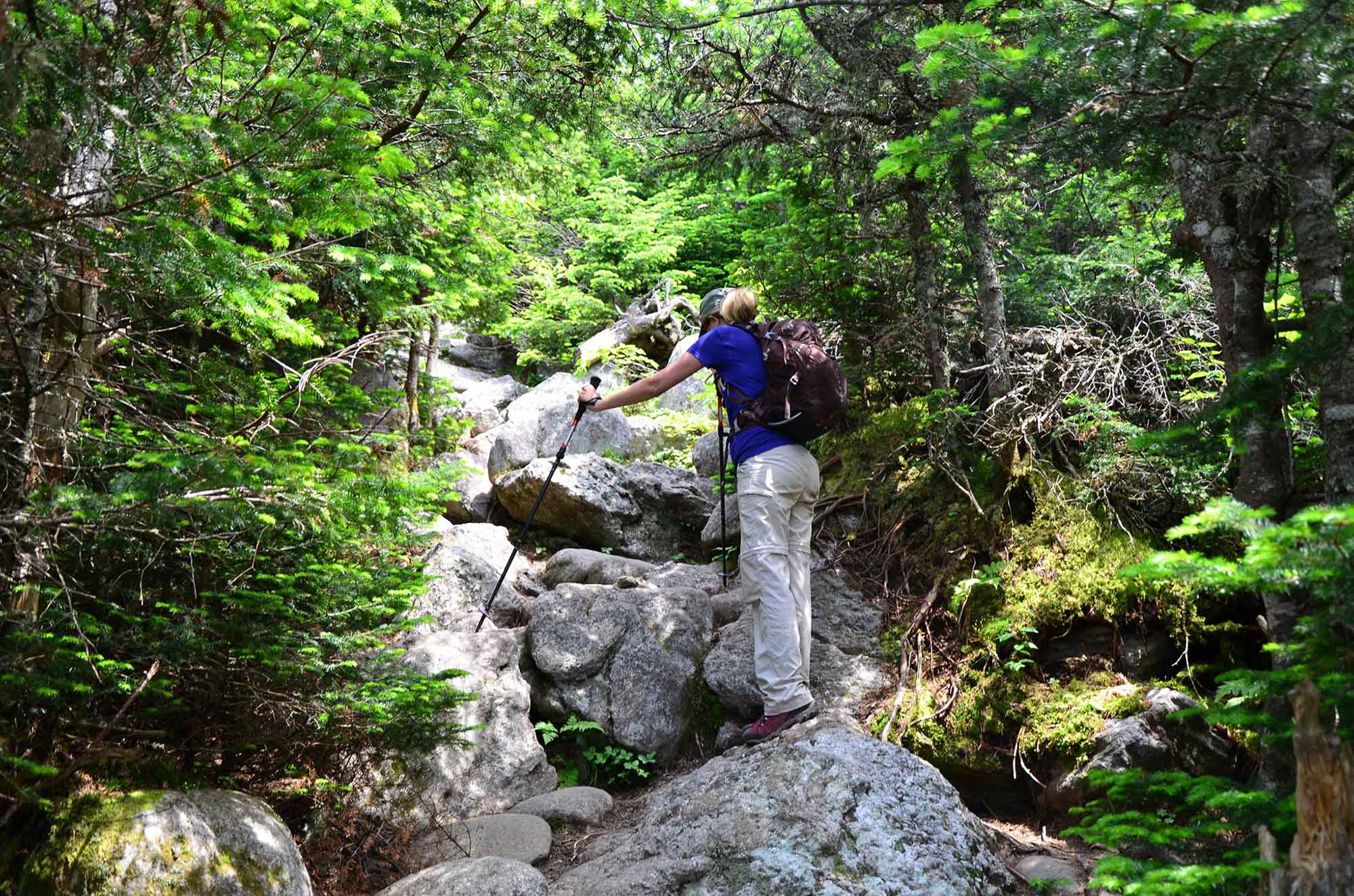 The Capps Ridge Trail may be the trail that starts at the highest elevation in the Presidential Traverse, but it is definitely not the easiest. The thing about the trails in the White Mountains is they do not follow a nice dirt path. You have to constantly step over boulders and even climb up a few – actually a lot – when you get to close to the top.

When Lagena and I came to a spot I considered a little tricky, the talks of bailing came up again. We were looking at a boulder that was taller than both of us. 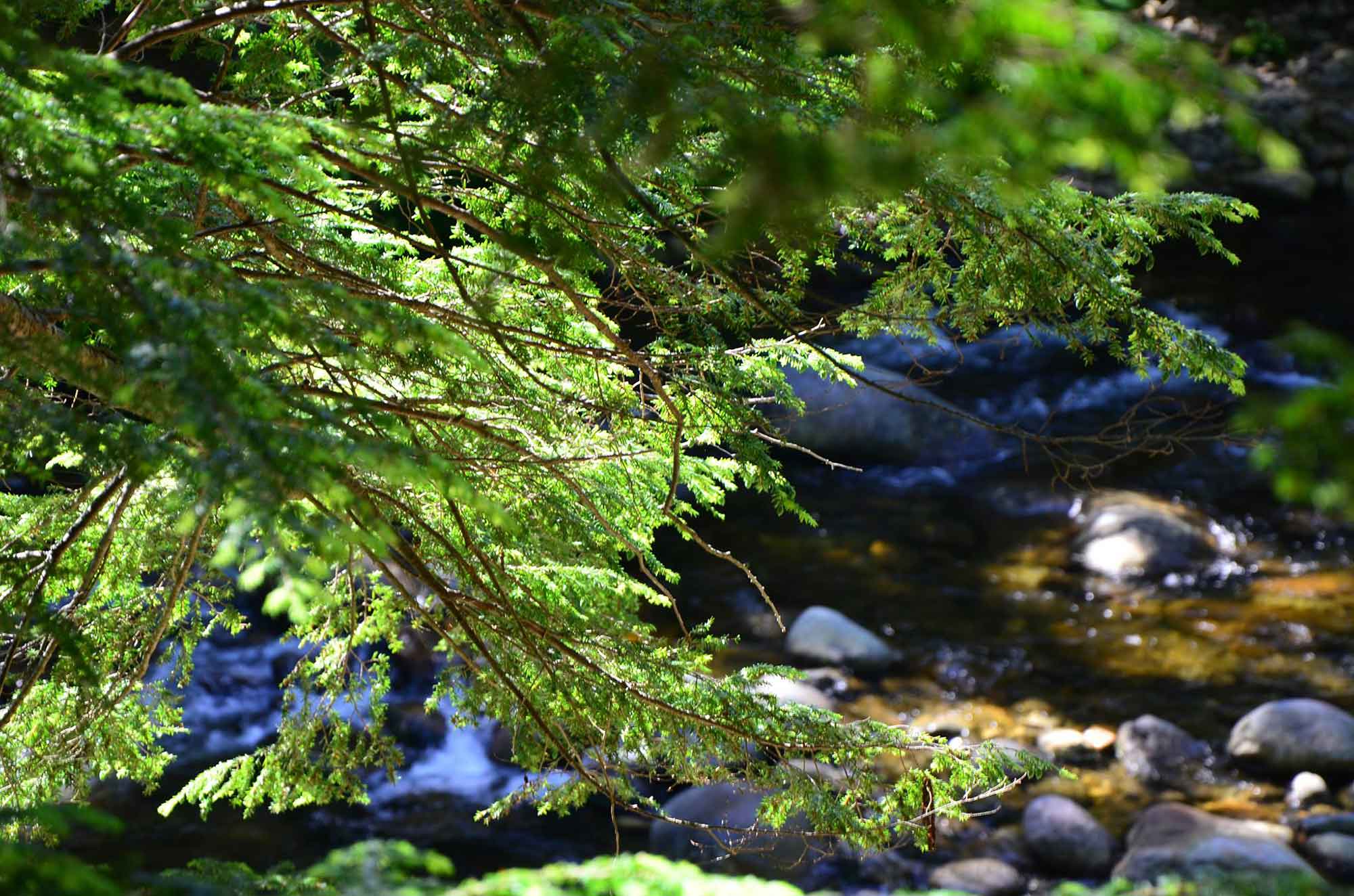 I told Lagena I would be OK with bailing if she wanted to. I really was ready to quite, but didn’t want to cause Lagena to quite before she was ready. She decided to try it and see, but her fear of heights kicked in and we pulled the plug.

A downhill hiker came around the bend at that point. I asked him if the rest of the trail was like this spot. His reply, “You’re just getting started.”

We hiked down, and drove to Maine for the rest of our time in New Hampshire.

Our first day in New Hampshire the skies were clear and blue. When you go to a place that calls itself “home to the world’s worst weather,” and you get a blue sky day, you take advantage. I told Lagena we should drive the Mount Washington Auto Road, a 7.6 mile toll road. 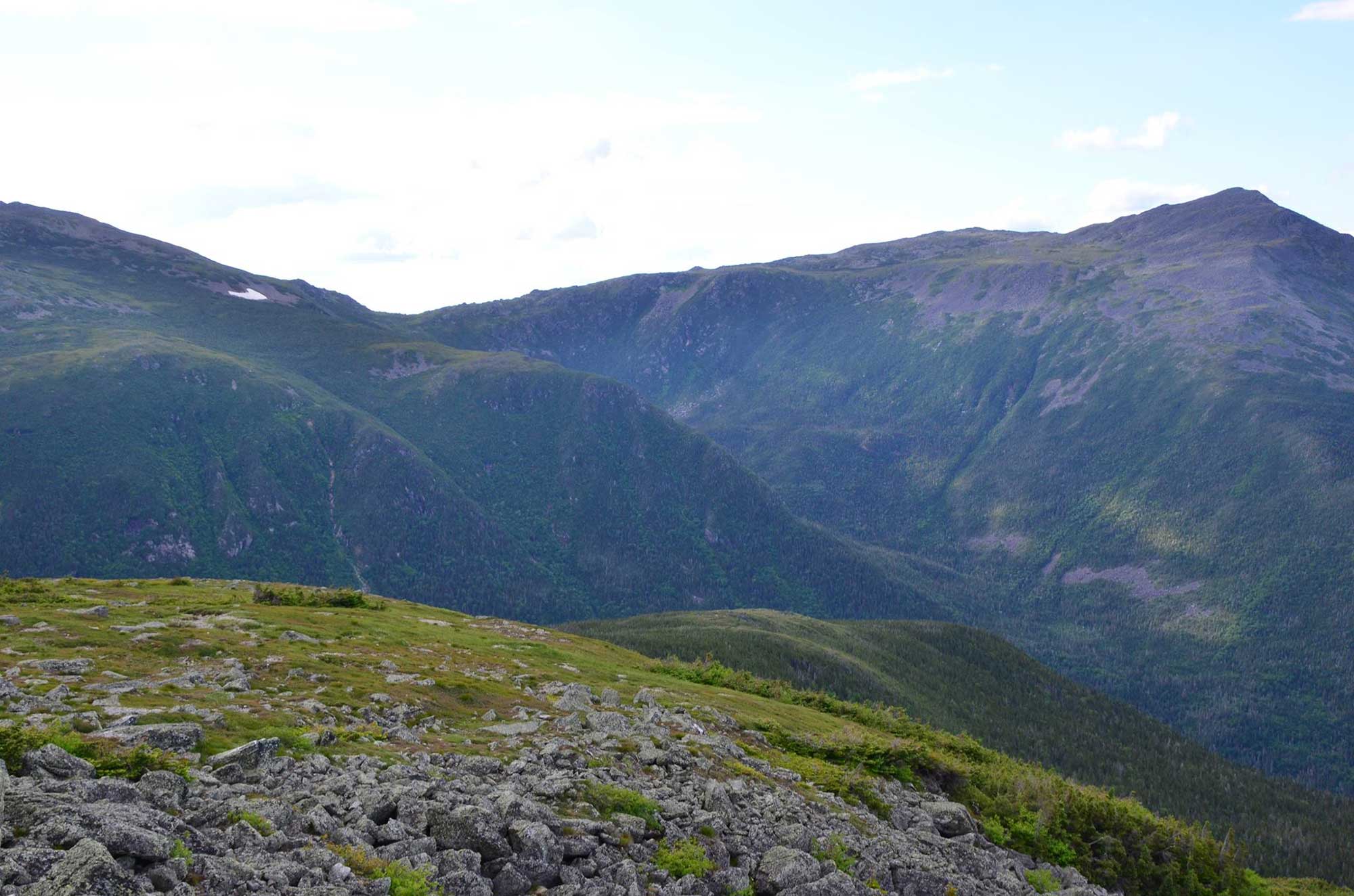 It was steep and twisting, but I was really glad we decided to do it since we did not hike up to the top.

We were provided an informative CD to play audio on our drive up and down. One of my favorite things I love about mountain is seeing the vegetation change as you climb in altitude. I loved seeing New Hampshire from above the treeline.

On the top of Mount Washington, there is a state park and weather observatory. Lagena and I toured the museum and learned about the crazy weather the mountain gets. 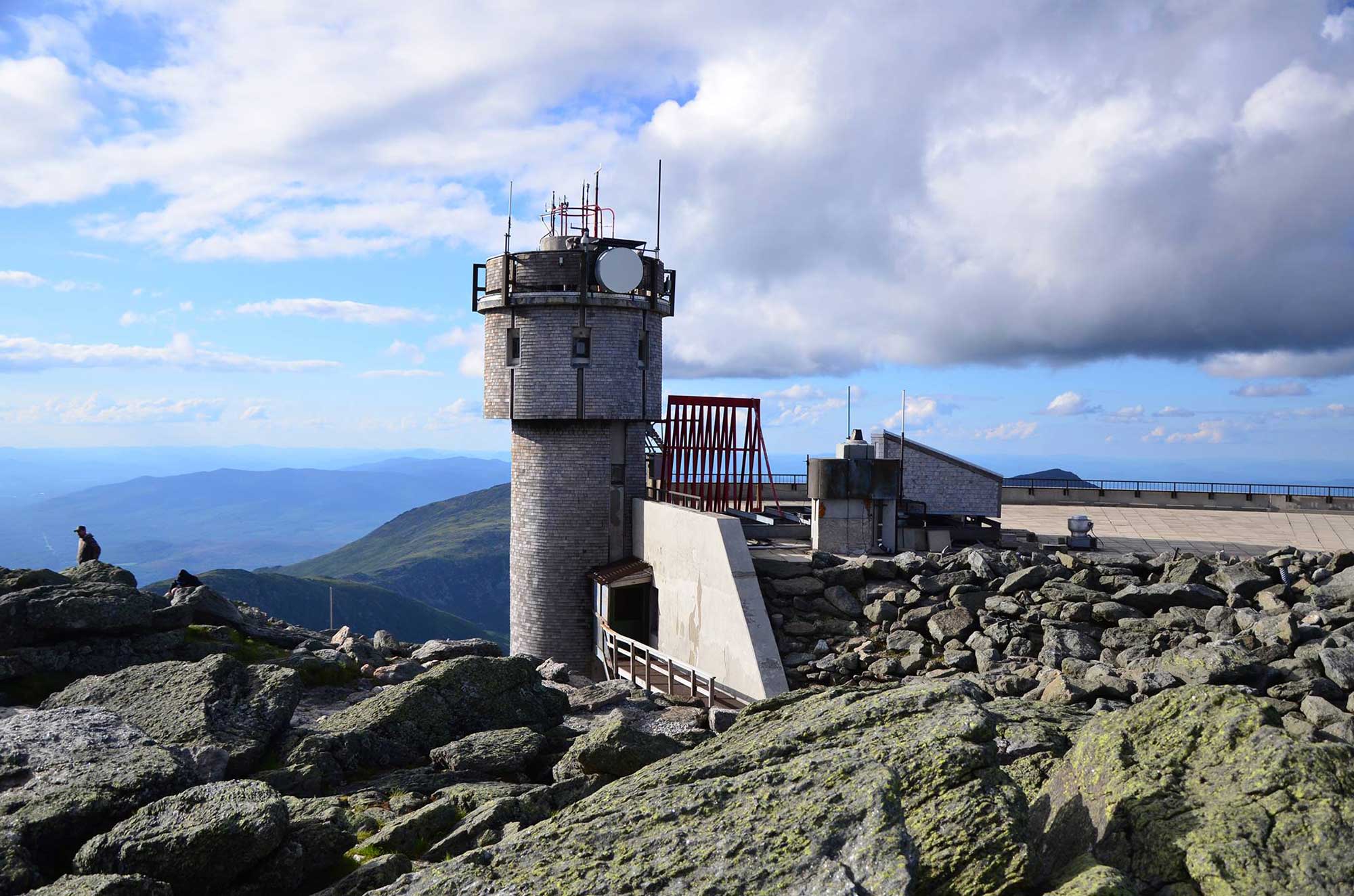 The cost to drive the road was a little steep (no pun intended), I thought. We paid $40, for two people in one vehicle. But I also thought it was worth it. I would have preferred to hike up, but I’m glad we had this option.

During our time in the White Mountains, we camped at Dolly Copp Campground, which is operated by the U.S. Forest Service. We were there the week of the Fourth of July and they had plenty of spots.

The people were extremely friendly and helpful. And the campgrounds were nice, with running water and flush toilets. They did not have electricity or water hookups. So keep that in mind if you are staying in an RV.

A few aspects of our trip to New Hampshire that I loved was that we were in the thick of Appalachian Trail thru-hikers. I loved seeing all the backpackers. I also believe we were mistaken for thru-hikers twice. 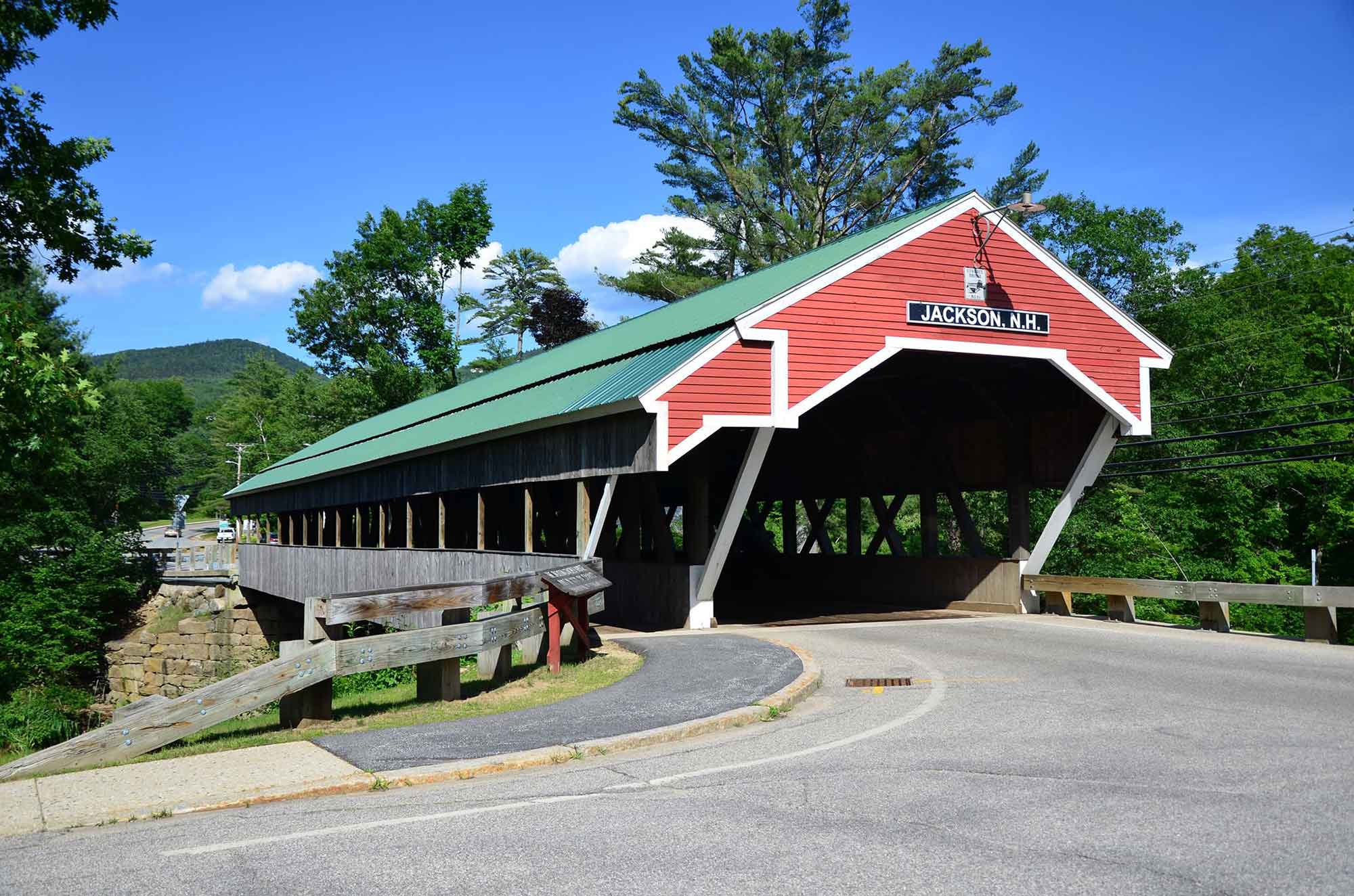 We also spent some time in the towns of Gorham and Jackson, which had excellent delis. The White Mountain Café & Bookstore in Gorham not only had tasty sandwiches but excellent service.

We also enjoyed seeing the covered bridges that dot the New England countryside.

Would I attempt the Presidential Traverse again?

All-in-all, it wasn’t a terrible trip. I can’t even say, “It wasn’t what I expected,” because I was worried about being able to hike it. We could have finished the original hike, but we just didn’t want to.

I would go back and try it again. And I’m sure, with the knowledge I have now, I would have no problem hiking to the top. Now that I know what it is like, I know how to train for it. I was lazy, did not take the boulder scrambling as serious as it is, and did not train properly before this trip. I won’t make that mistake again. 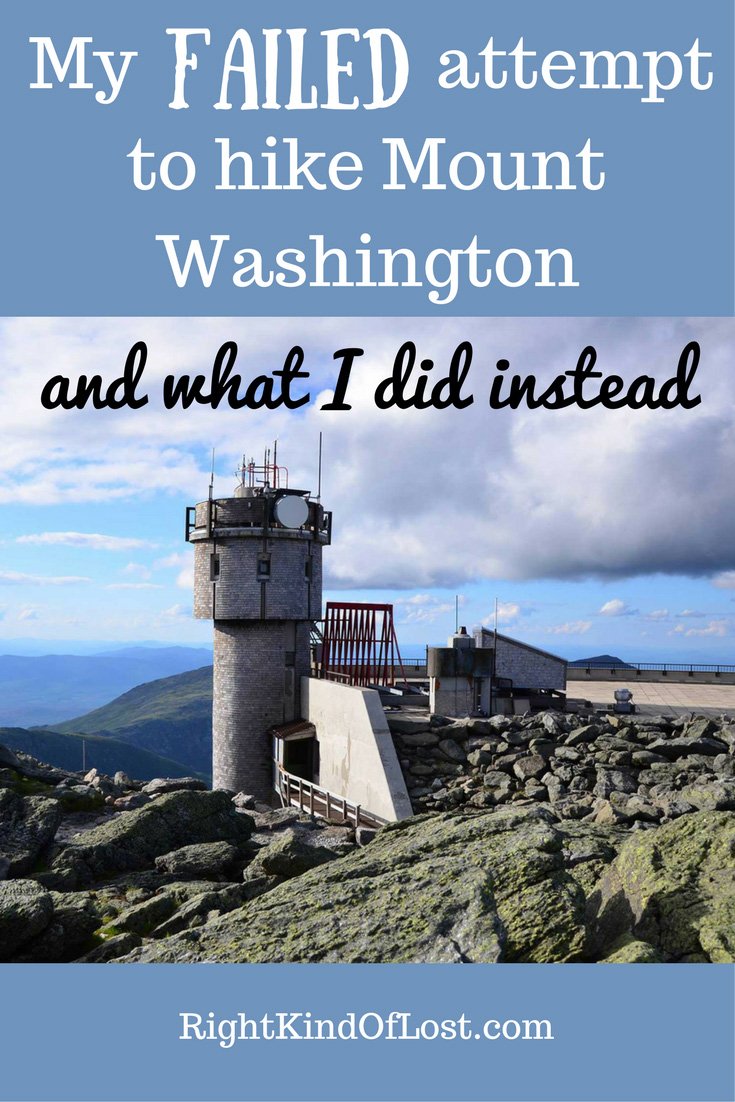