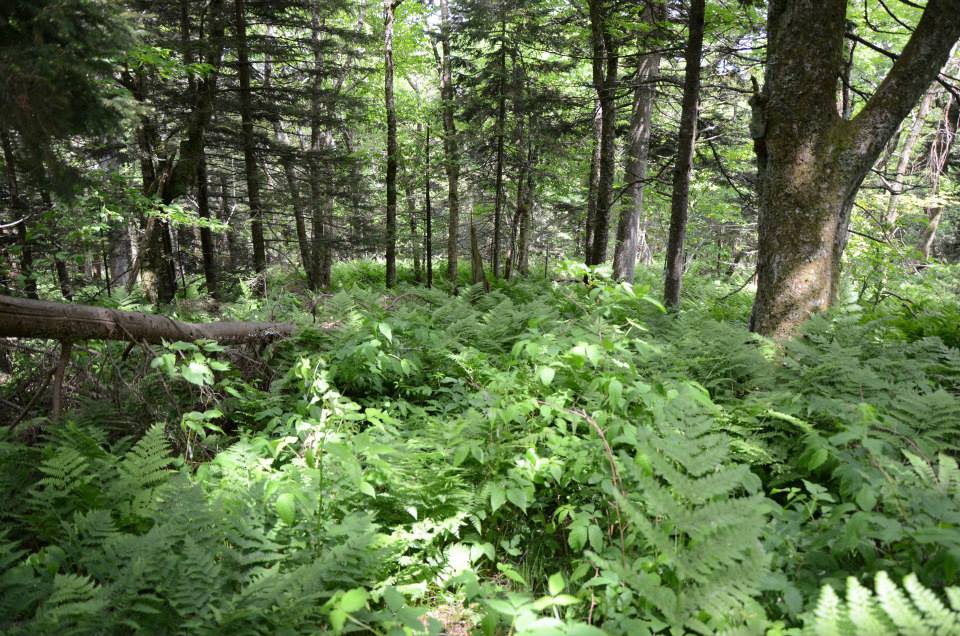 After spending only a week in the Great Smoky Mountains National Park one year for vacation, I knew I would have to return to the area because one week is not near enough time.

Three years later as Crystal and I were planning our vacation, North Carolina came up in discussion because she had a friend who was getting married there. I remembered my love for the area and wanted to drive along the Blue Ridge Parkway, and that settled it. 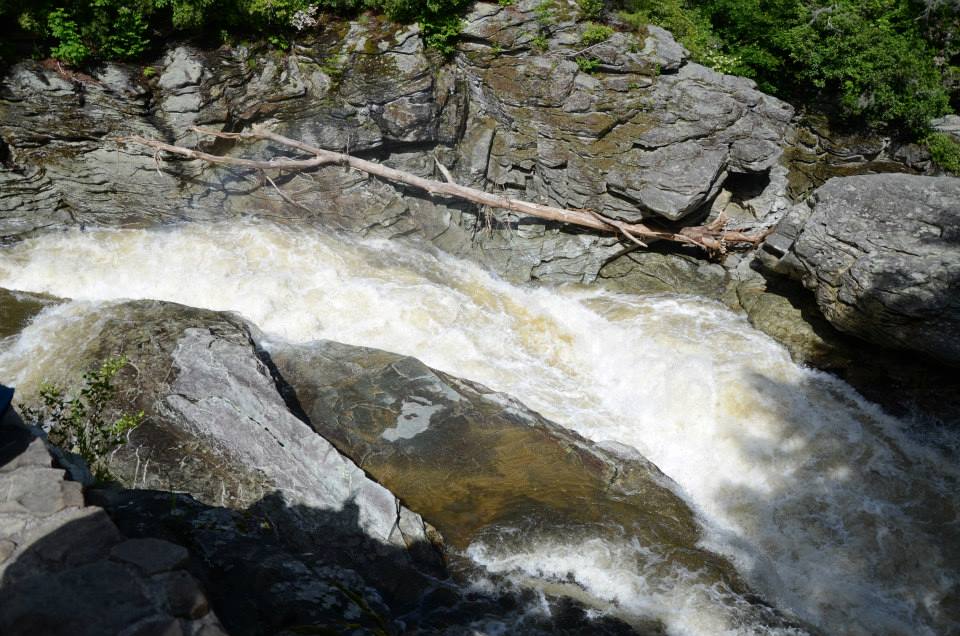 North Carolina is an amazing state with diverse terrain and opportunities for adventure. It offers high mountains and beautiful deep valleys along its western edge, and the Atlantic Oceans with white sandy beaches along its eastern edge.

We began our journey at Mount Mitchell, the highest mountain east of the Mississippi River with an elevation of 6,684 feet. From there we traveled north along the Blue Ridge Parkway to Linville Falls and Linville Gorge. We backpacked at Grandfather Mountain State Park, also located on the parkway. We then drove across the state to the Croatan National Forest and explored where the fresh water meets the ocean. We concluded our trip by camping on the shores the Atlantic Ocean in the Cape Lookout National Seashore. 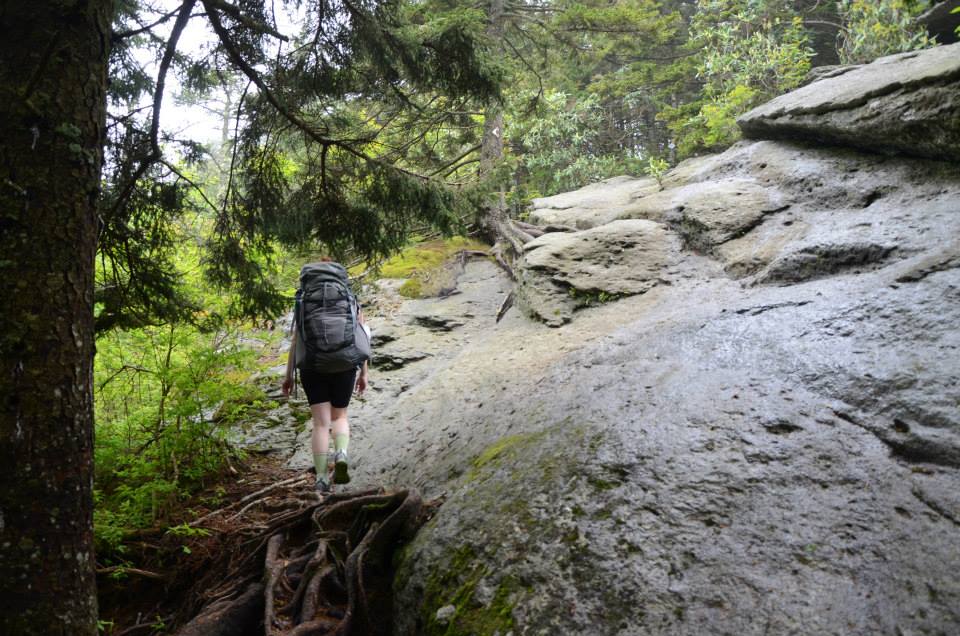 I loved witnessing the changing ecosystems between the higher elevations, the coastal forest, and the beach. North Carolina is a diverse state.

Crystal and I had reservations for the park, however because of a wreck on the interstate we did not make it to Mountain Mitchell until about midnight. And apparently they locked the gate at some time before midnight. Because we were about an hour’s drive from Ashville, N.C., where there was a hotel, we just decided to sleep in the car. 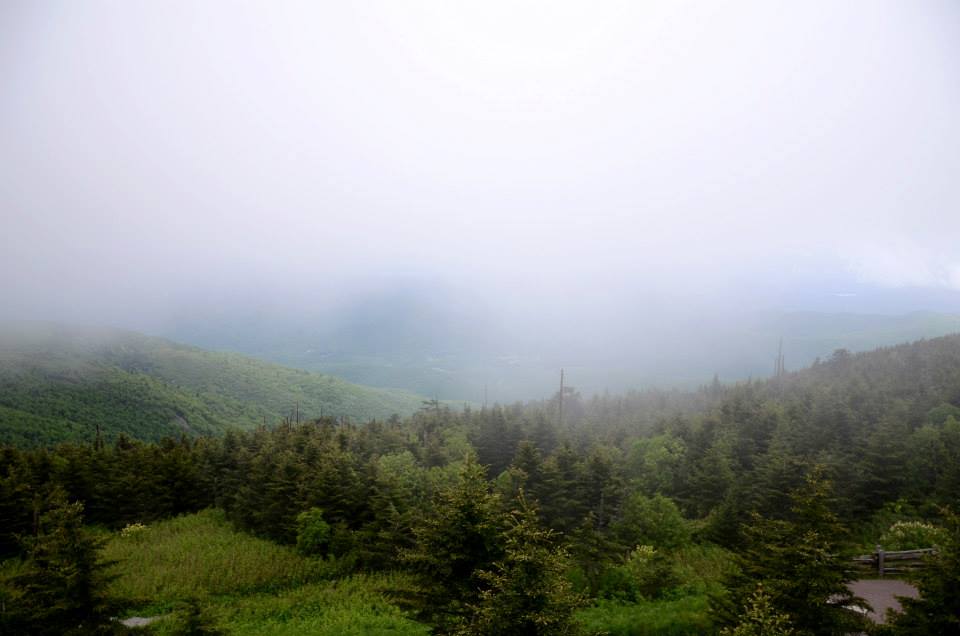 The only problem was we had seen a bear just as we pulled up to the gate and our car was full of food. I wasn’t sure if this was the right thing to do – to sleep in a vehicle with open food containers and a known bear lurking about.

Eventually just after sunrise the park ranger woke us up by knocking on the window and let us into the park. I wasn’t too upset about sleeping in the car because it rained throughout the night and I didn’t want to set up the tent in the rain. 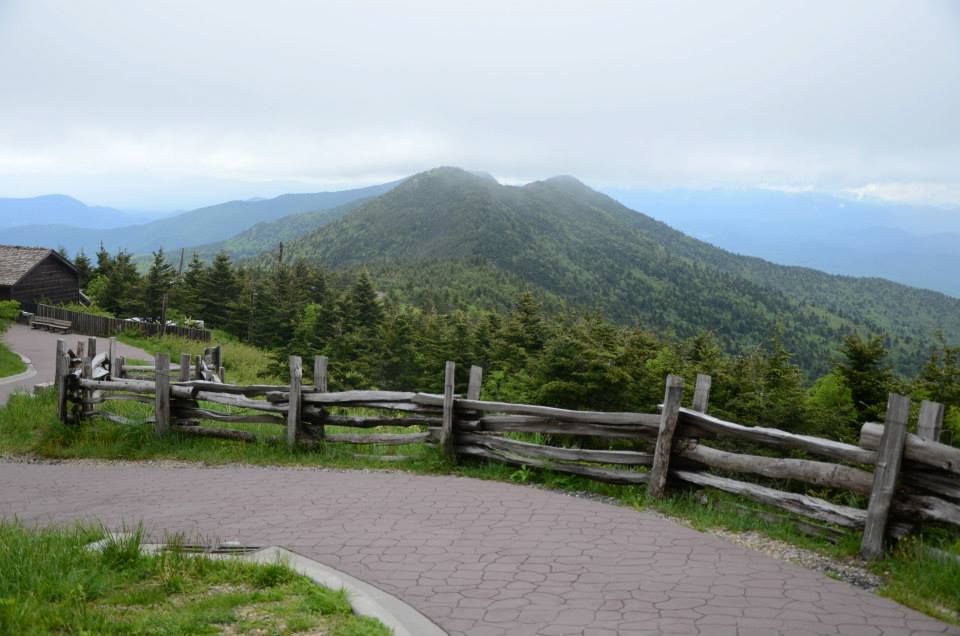 The next morning the rain had moved out but the fog had set in. We walked up the paved walk way to the highest point on the mountain to get a great view of that fog. Even though the weather did not cooperate we enjoyed the beauty of the fog and the Appalachian high elevation evergreens.

From Mount Mitchell State Park, Crystal and I explored the mountain scenery along the Blue Ridge Parkway, which is part of the National Park Service. The parkway is a slower paced drive and offers many pullouts which make for great photo opts. 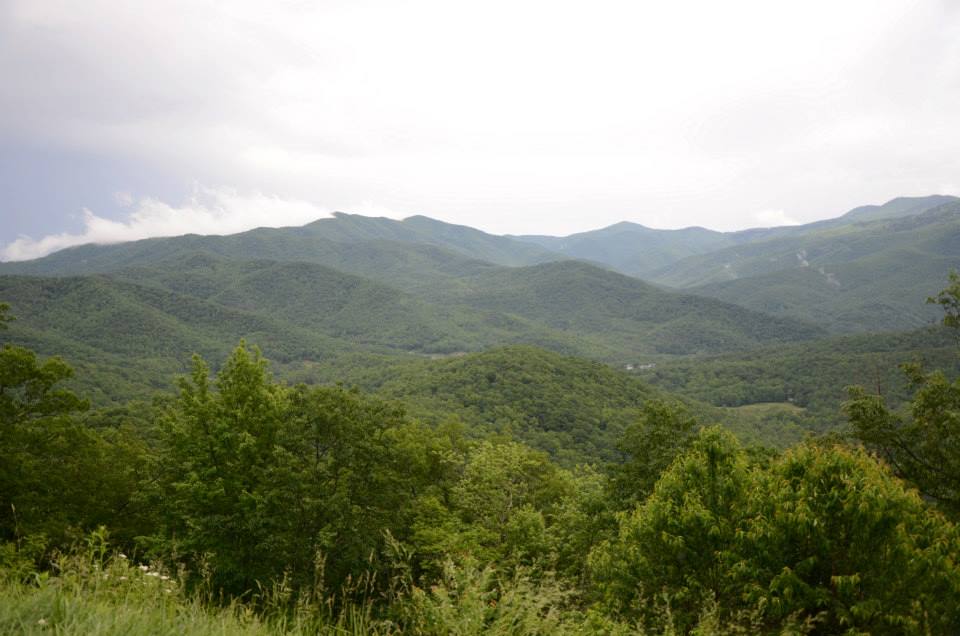 Delighted to not have to sleep in the car or in the rain, we set up our camp at the Linville Falls campground, also run by the National Park Service.

The falls can be observed from four different overlooks via hiking a few miles. The park service rates the two trails to the overlooks as moderate to strenuous. A map can viewed here. Crystal and I hiked the west side of the river to the Chimney View and Erwing View. The trail was steep and slick in some places, but the views were amazing. Linville Falls are one of the most beautiful falls I have ever seen in person. 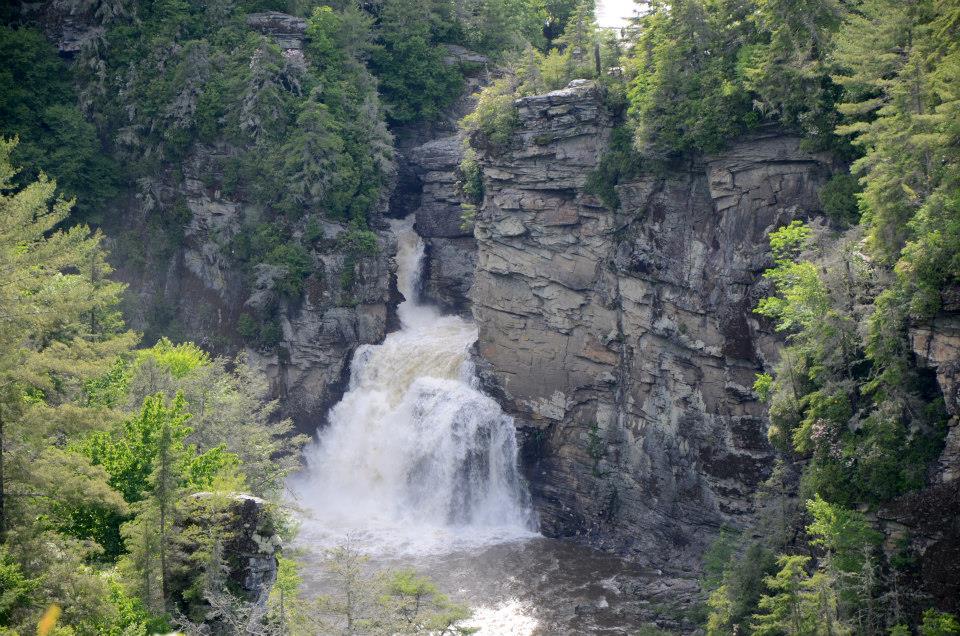 Linville Falls is one of the more popular hikes in North Carolina as well as along the parkway, so we saw quite a few people. We were there in the summer, but I would love to go back in the fall and see the colorful foliage.

The next morning we broke camp and left the Blue Ridge Parkway to hike the Table Rock Summit Trail. The trail climbs to the top of Table Rock Mountain and provides spectacular views of Linville Gorge. 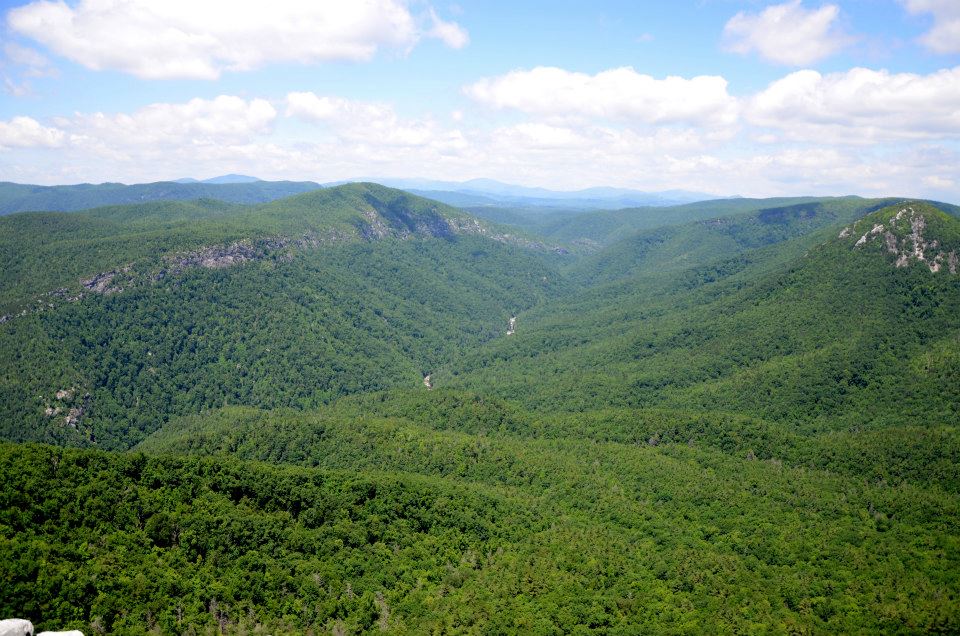 The trail is short, only about a mile and a half round trip. We wanted a short trail because we were going to start our backpacking trek that day also.

The hike is steep but not too bad because it is short. The views from the top are a total pay off for a little steepness. 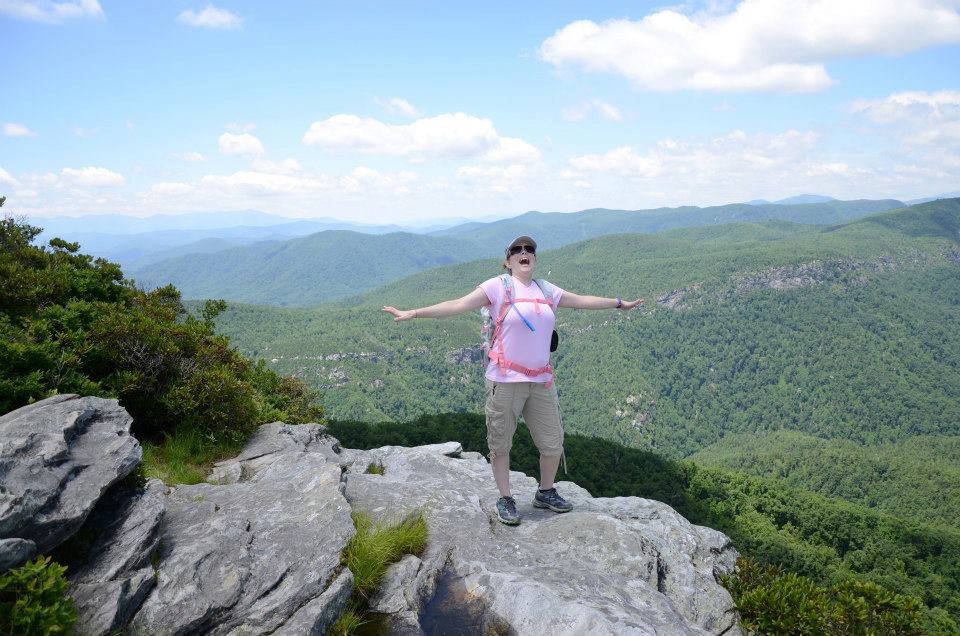 The gorge is located in the Linville Gorge Wilderness Area, which is part of the Pisgah National Forest. With about a 2,000-feet elevation change from the mountain tops to the valley floor, the gorge is jaw-dropping beautiful.

From Linville Gorge we traveled further north along the Blue Ridge Parkway to Grandfather Mountain State Park, for our two day backpacking trip. 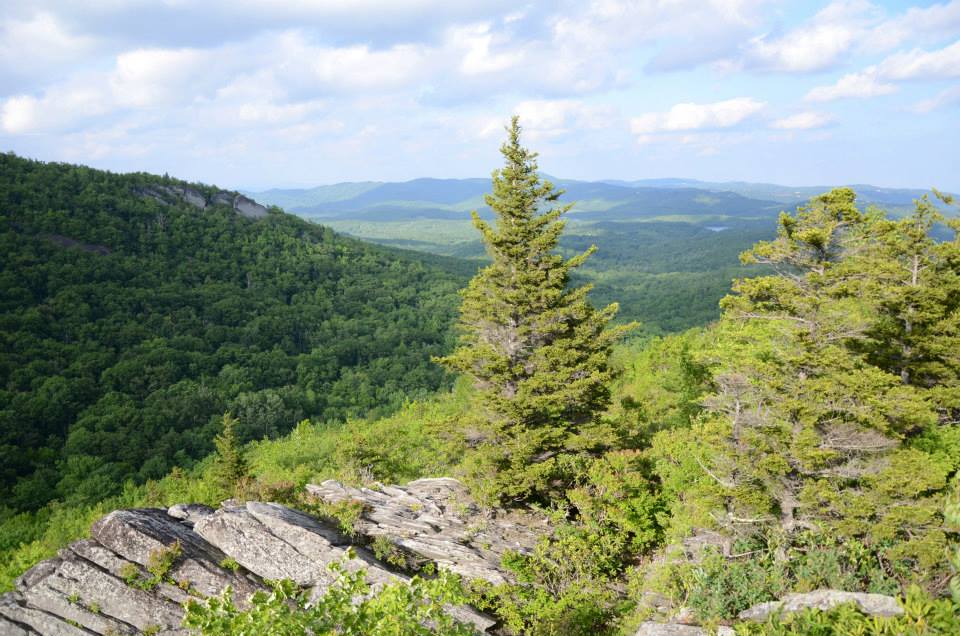 Grandfather Mountain is a non-profit stewardship that promotes conservation. It boasts a Mile High Swinging Bridge and beautiful mountain scenery. Crystal and I decided to hike into the stewardship via the state park, however we failed to make it that far. 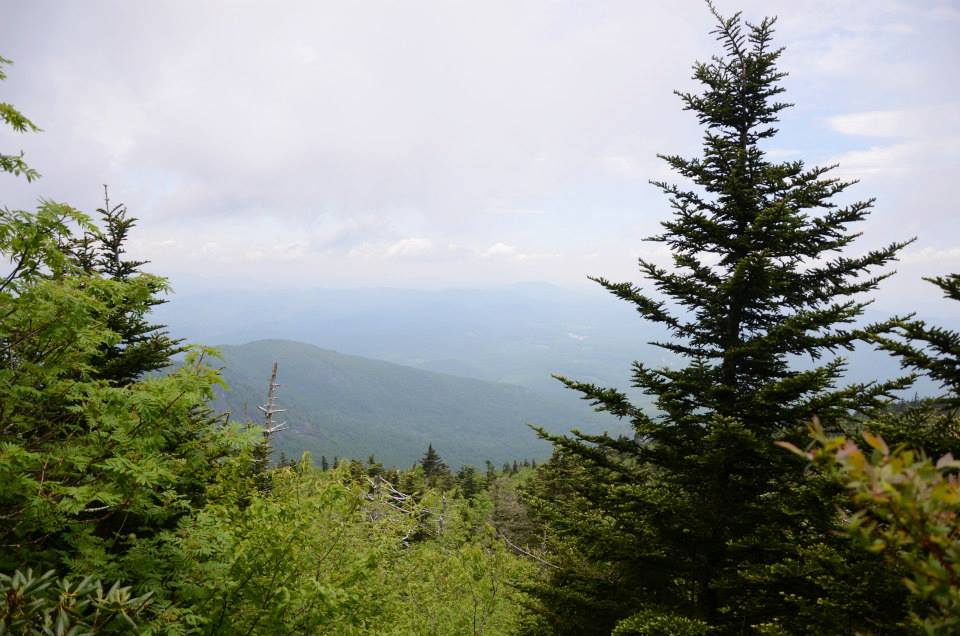 We parked at the Boone Fork Parking Area along the Blue Ridge Parkway, and hiked to Calloway Peak, located about three and half miles from the parking area. We camped at the Daniel Boone backcountry site. For a more detailed post about this trip check out my Grandfather Mountain Backpacking post. 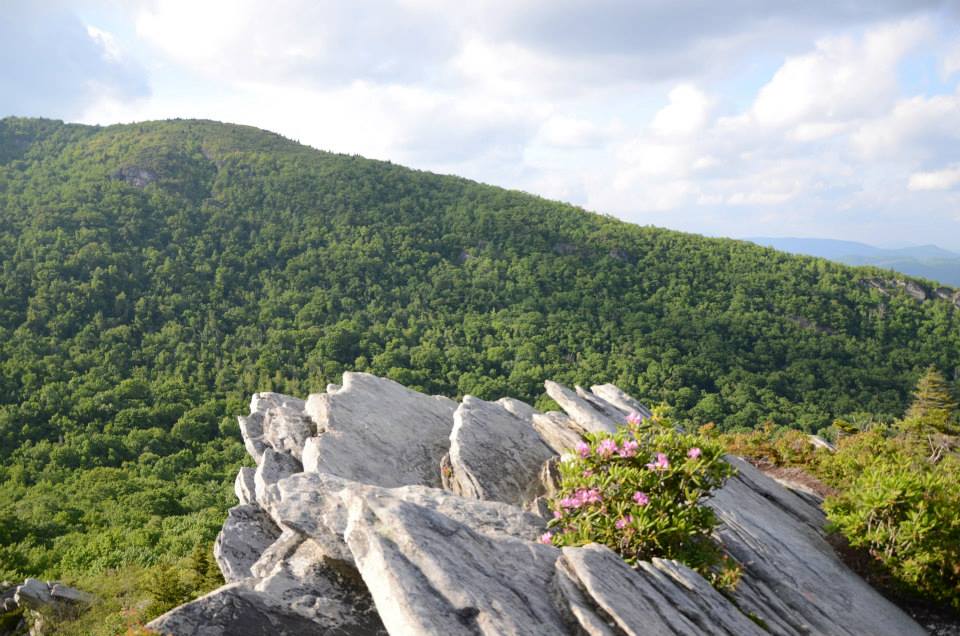 Grandfather Mountain State Park only offers backcountry camping, however it is so beautiful it will make you want to backpack in it. The trail took us through thick greenery and magnificent vistas. 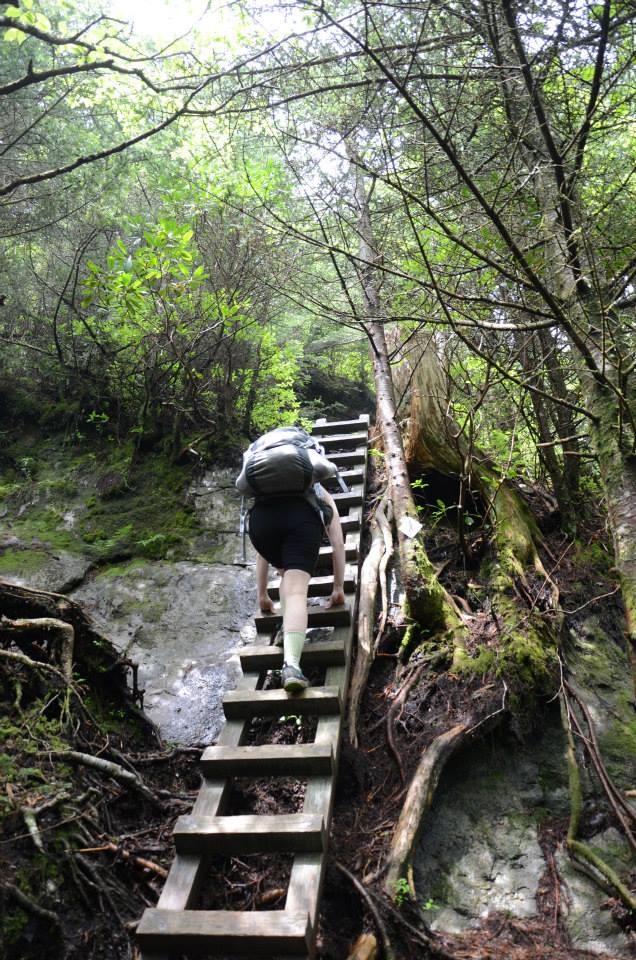 One scary aspect though was it also incorporates ladders and cables to help hikers over slick rocks, or simply straight up a cliff.

After our two-day epic hike, Crystal and I agreed a hot meal we didn’t have to cook would be quite nice. We drove into Boone, N.C., a very charming Appalachian town. We ate dinner inside at a local flavor restaurant and then walked through the historic downtown and treated ourselves to ice cream. We camped at a concessionaire in Boone which had hot showers.

The next morning we drove five and half hours across North Carolina to Swansboro, N.C., located on the Atlantic coast. There we camped in the Croatan National Forest. The forest’s website states that it is the only true coastal forest in the East and consists of pines forest, salt water estuaries, swamps, and bogs. 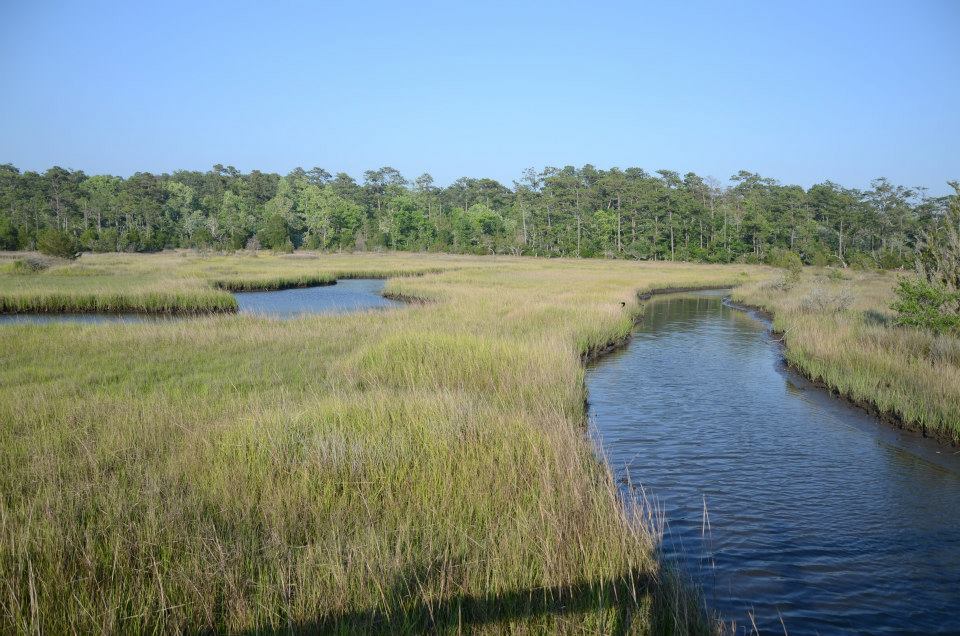 Crystal and I loved seeing the change in the ecosystems from the mountains where which we had come. We walked along raised boardwalks among the swamps and estuaries via the Cedar Point Tideland Trail. The sandy ground was dotted with craps that would hide in small holes. 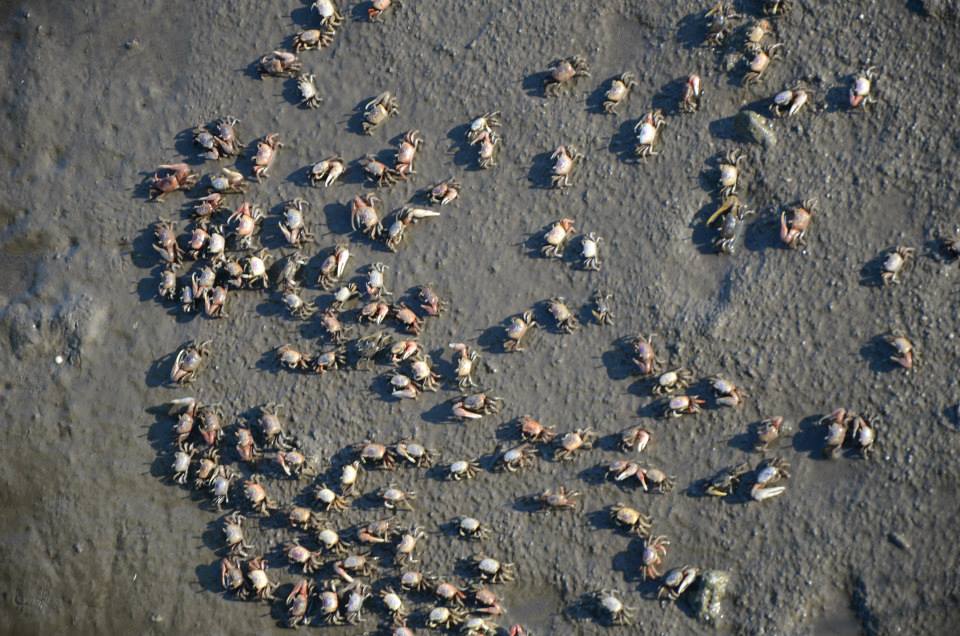 Storms were moving in and it poured on us all through the night, but they made the evening air heavy with humidity. I wasn’t sure if this was normal for coastal North Carolina or if we were just there at a bad time, but it was oppressive. 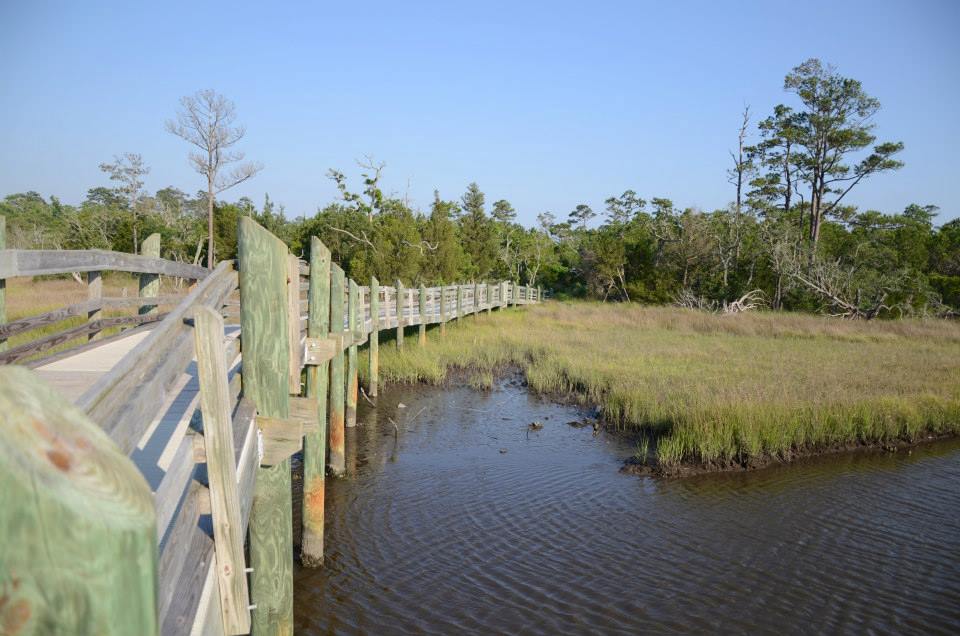 We walked around the waterfront in Swanboro, which was charming and beautiful, before heading back to camp to cook dinner before the storms rolled in. 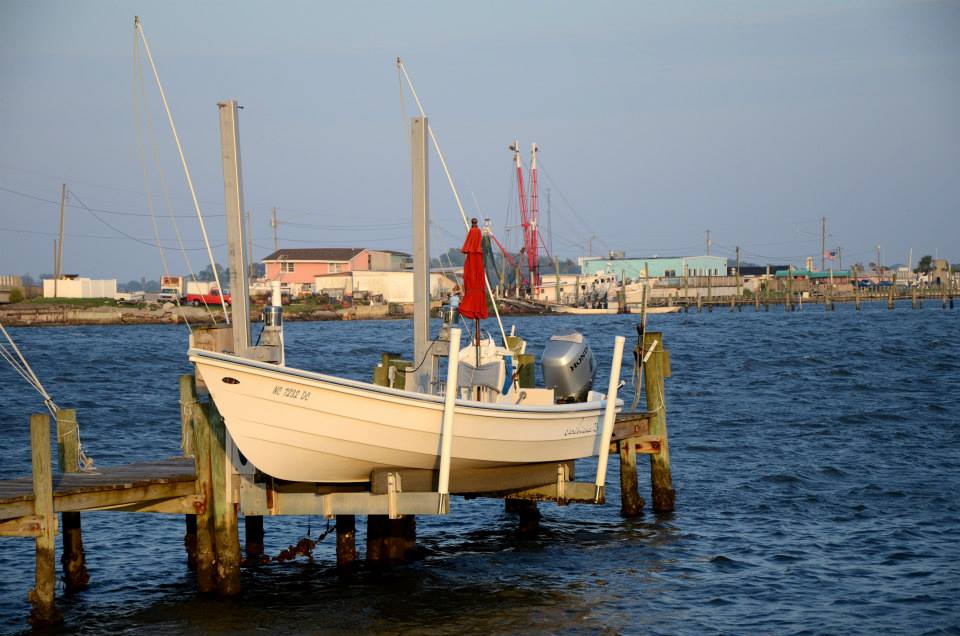 North Carolina is home to two national seashores, Cape Hatteras and Cape Lookout. Cape Hatteras is more popular, but we chose Cape Lookout because it was closer to Wilmington, N.C., where the wedding we were attending was held. 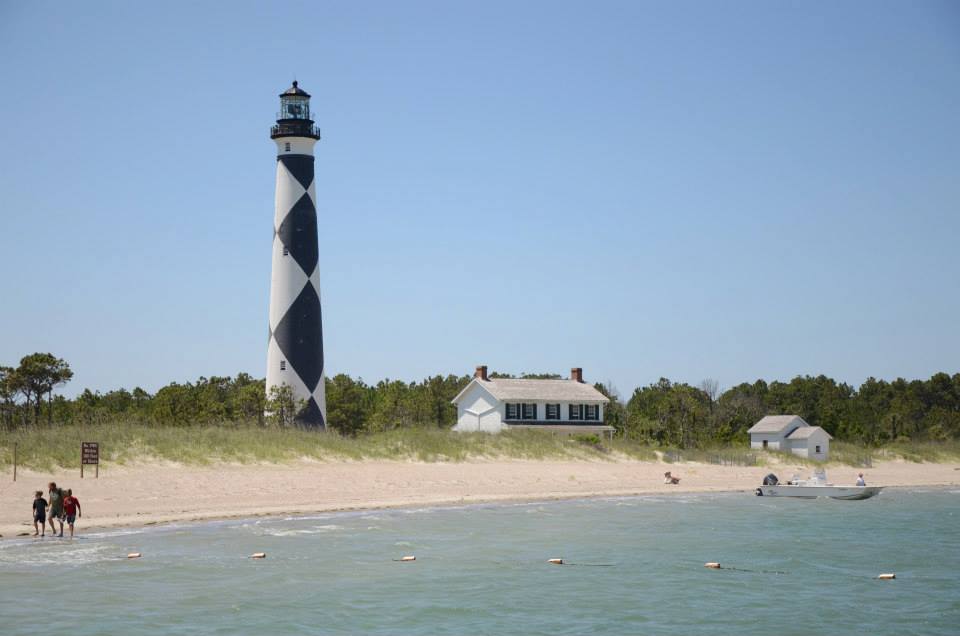 The seashore is only accessible by boat. But don’t worry if you don’t have a boat, there are many business that will ferry you over to the barrier island. Crystal and took the ferry from Harkers Island, N.C.

Camping is allowed on the beach with no cost. Crystal and I joked that even though we did not have to pay to camp, it was our most expensive night camping because we had to pay to ferry over and back to the mainland. 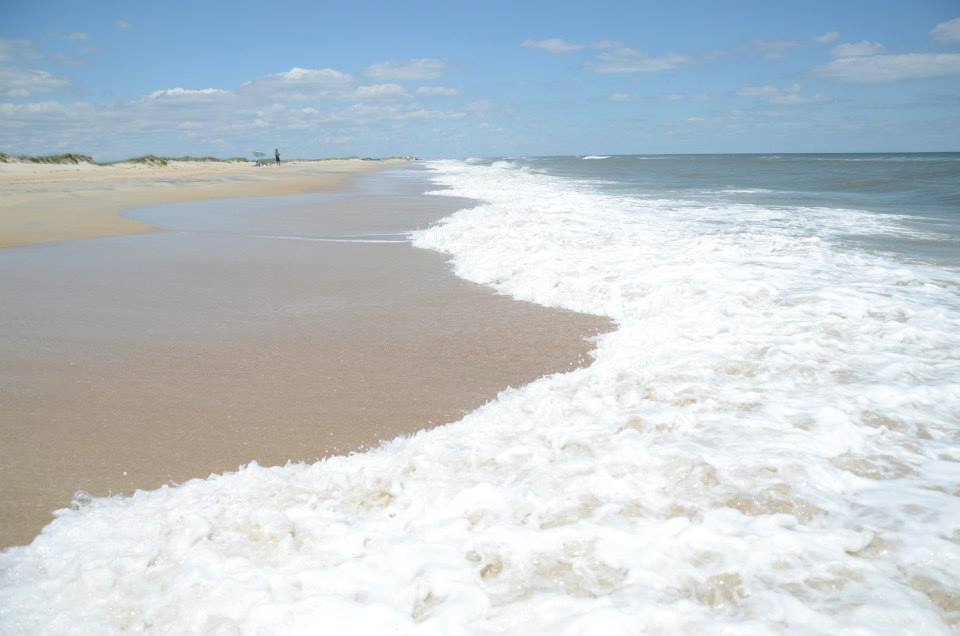 The first thing we did when we got to the seashore was climb the lighthouse. It’s kind of a necessity when visiting the island. Because there is not much room going up and down or at the top, we had to wait our turn to climb to the lookout. We only had to wait a little while, and it was more than worth it. The view was amazing. 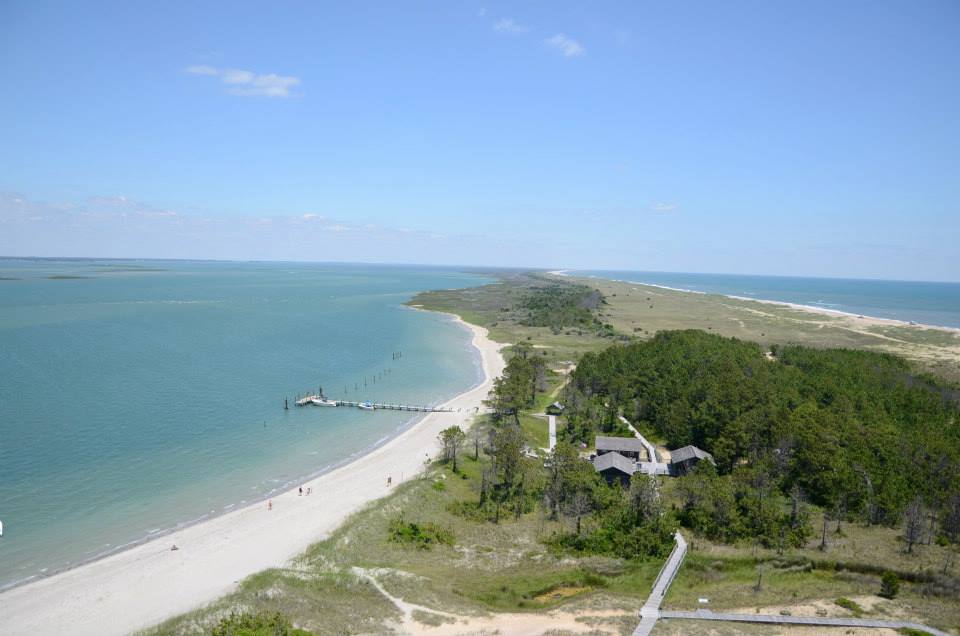 We did not make it very far down the beach because walking in the sand, especially with a heavy pack, was very hard. We found a nice place a good distance from others and threw our stuff down.

After we set up our tent, we explored the island and went swimming in the ocean. One problem we had was we had no where to completely rid ourselves of sand and therefore tracked a lot of it in the tent. It was still completely awesome to sleep on the shore of the ocean. 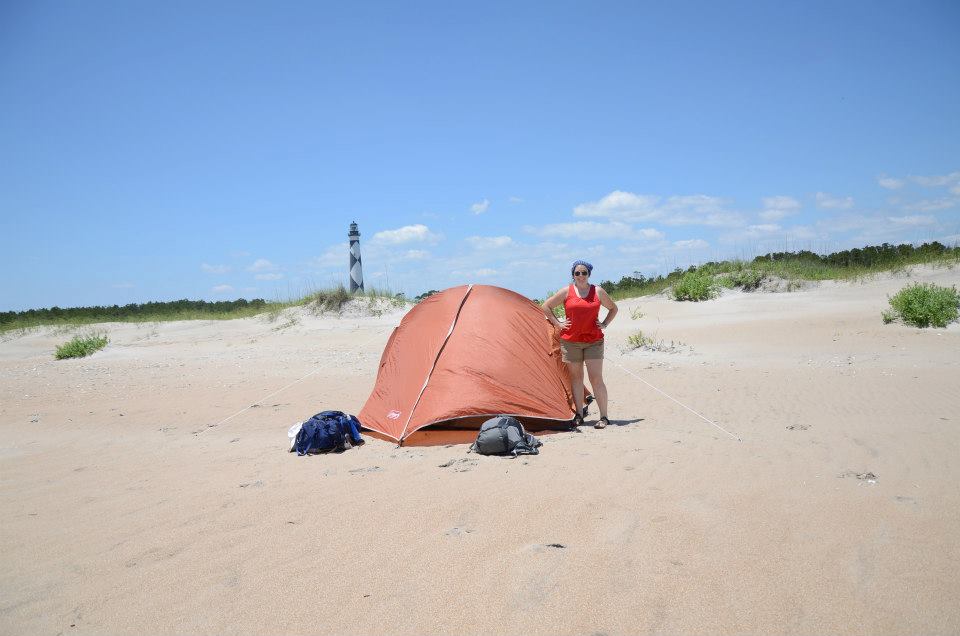 As the sun sank low the biting flies came out and drove us into our tent before sunset. I loved hearing the waves crash on the beach all night! However our tent was double walled, meaning the mesh inner wall went all the way down to the bottom. We inhaled sand all night from the wind constantly blowing it into our tent. When I sleep on the beach again, I will use a different tent. One that sand cannot blow into. 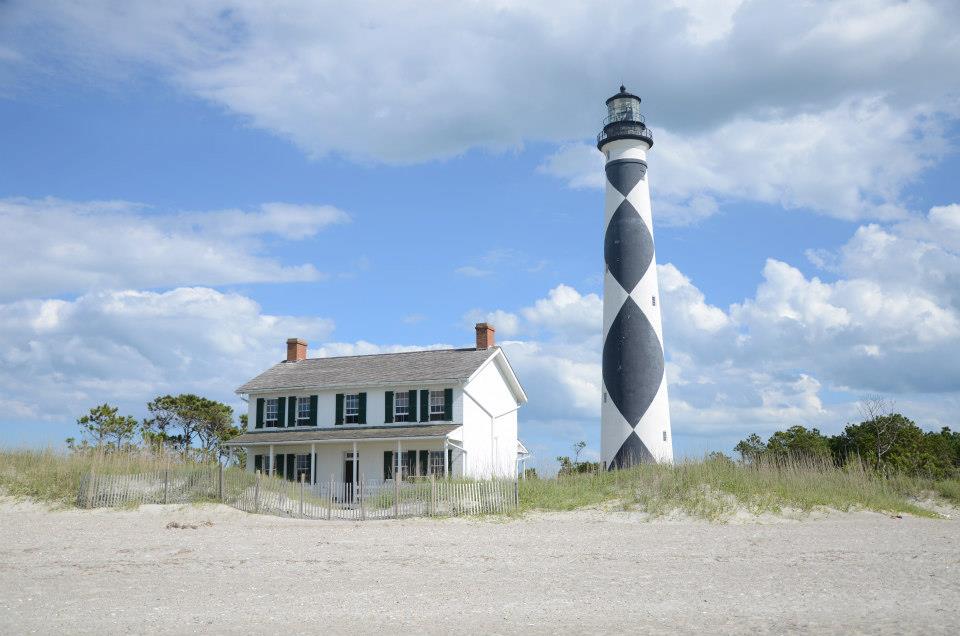 I set my alarm to wake up before the sunrise. I watched the sun rise out of the ocean, and then went back to sleep for a little while longer.

On our return trip to Harkers Island via the ferry, we saw wild horses that inhabit the island. 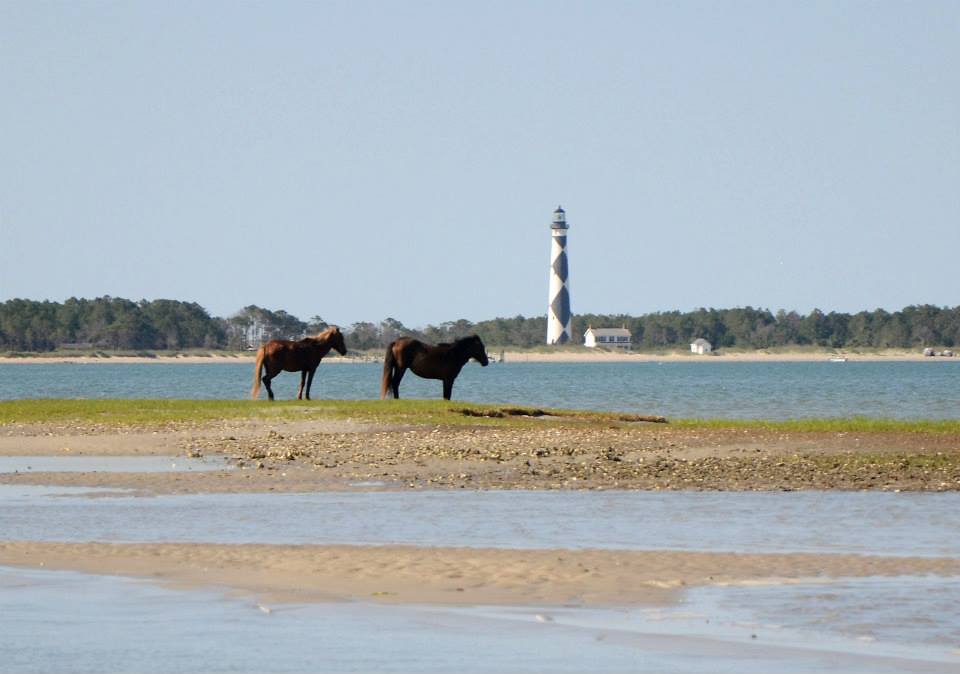 I absolutely loved every minute of my trip to North Carolina. The state offers mountains, history, beaches, and diverse ecosystems. This trip also provided me with my first backpacking trip and first time camping on the ocean. 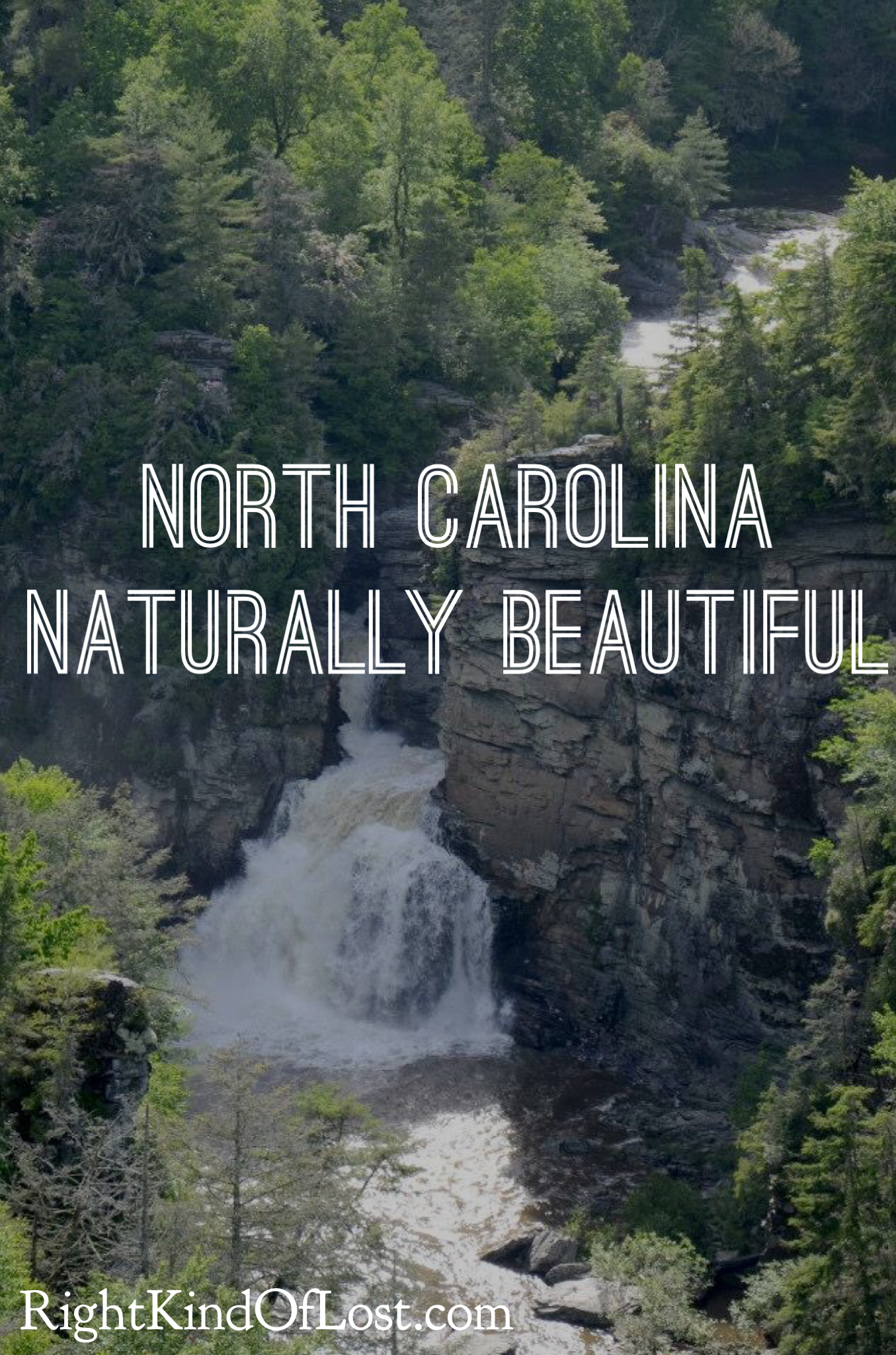