One great thing about car camping is coming up with some amazing campfire recipes for a gourmet meal in the woods. Lagena is an awesome campfire cook and has some amazing recipes to share with us. Check it out! 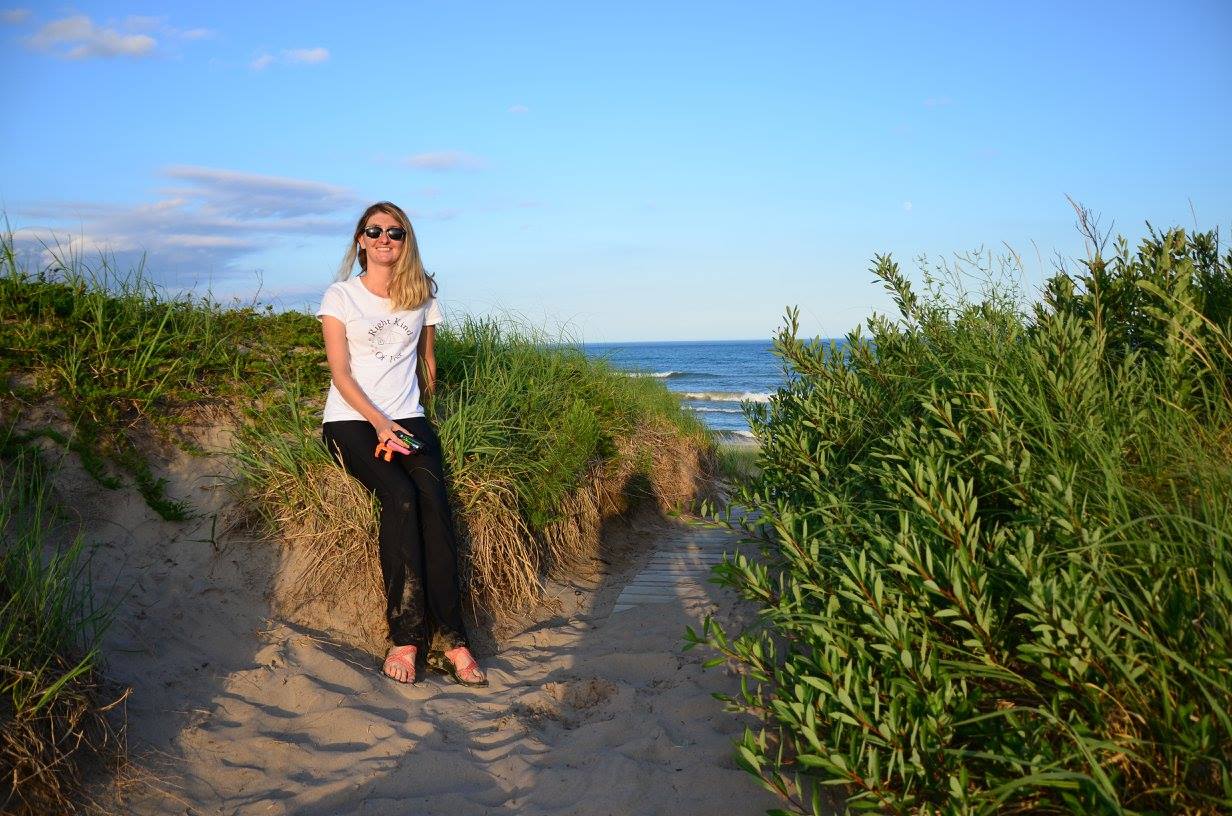 Lagena looking pretty on the banks of Lake Michigan.

Cooking around the campfire can be really fun, and, amazingly, relaxing. I am not a cook at home, and I was a little hesitant about cooking. But after getting the proper equipment, it could not be easier – as long as there’s someone to start the fire.

Campfire recipes with a Dutch oven 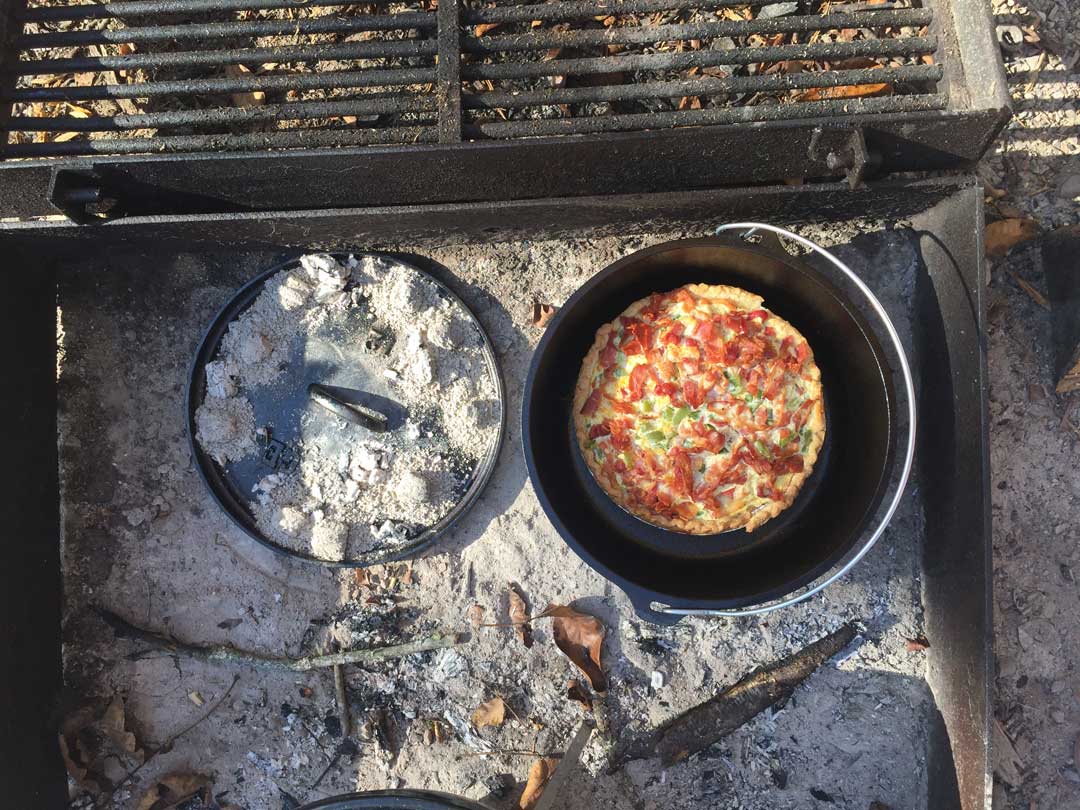 I have a 12-inch Dutch oven, and I learned a nifty little trick to figure out how to keep my Dutch oven at 350 degrees, which is what all recipes that I have found call for. I simply multiply the diameter of your Dutch oven by two. So I need 24 briquettes of coal. I then divide that number by three to figure out how many briquettes go under the Dutch oven. The remaining 16 go on top of the lid.

I like to pre-prepare things because I am not a morning person. And I don’t think putting a knife in my hand when I just wake up is a good idea. 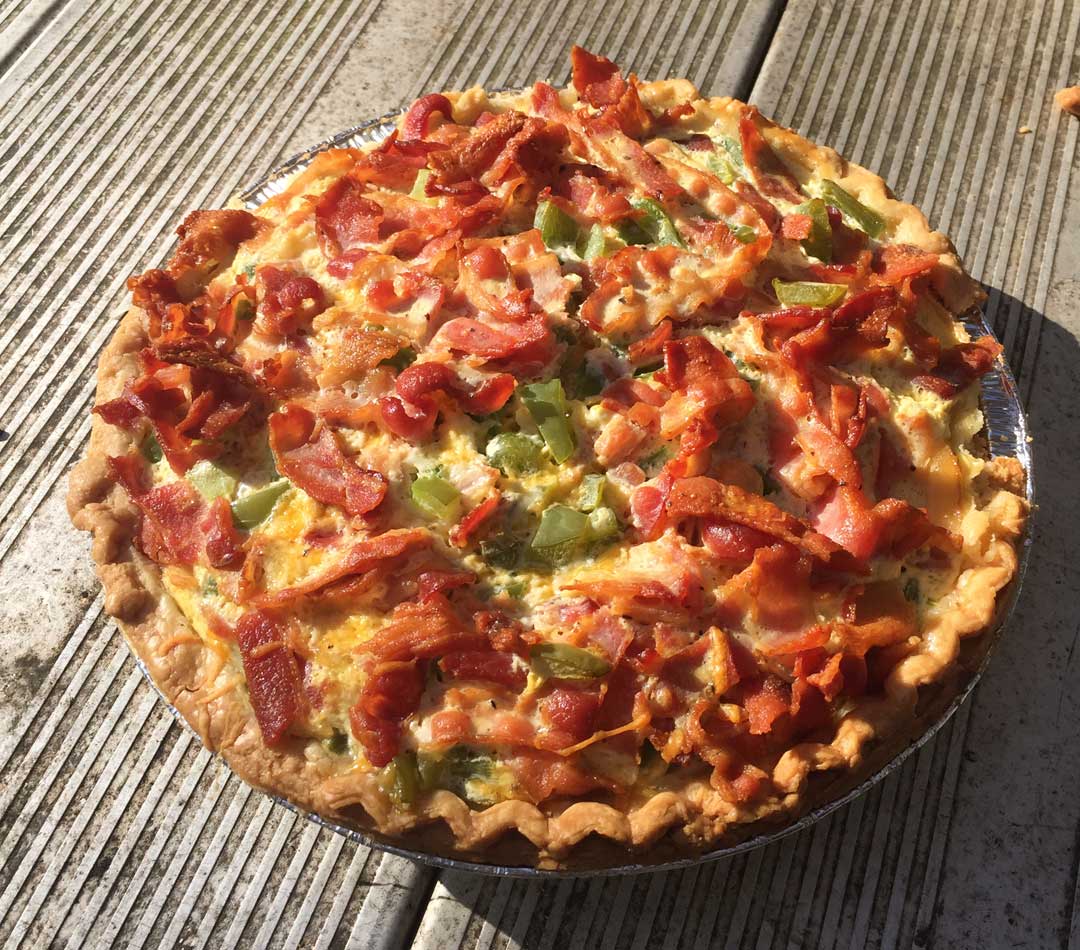 Bake the empty crust for five minutes. Remove the pie crust from the Dutch oven. When you do this make sure that you do not put the Dutch oven lid down on the ground. Put the bacon (save a little for the top), pepper, onion, and cheese evenly over the crust. Pour the egg mixture into the pie crust. Go slow! Bake 40 minutes or until the center is set. Make sure your Dutch oven is not leaning to one side in the fire. It will make the egg mixture leak over the side. Once removed, put the remaining bacon on top of the quiche, cut into wedges, and serve. 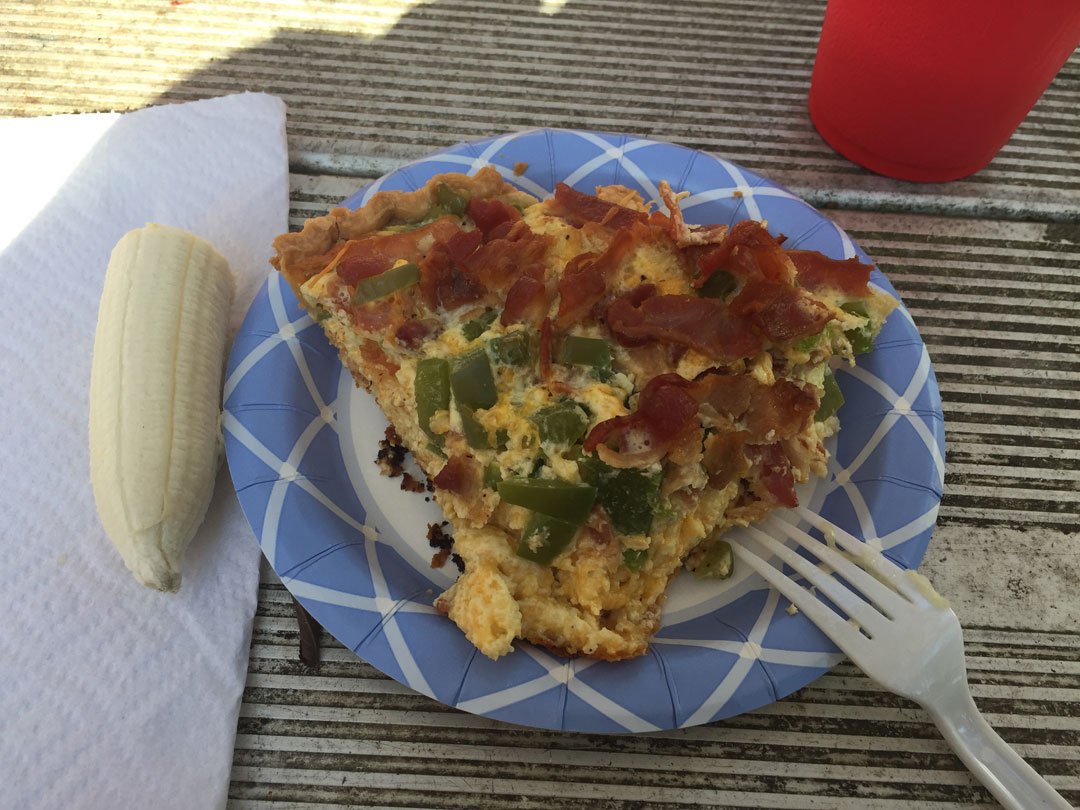 My other go-to recipe is a crowd-pleasing french toast recipe. This does not require the Dutch oven, but you do want to keep the gloves handy. (Those gloves are awesome.) This recipe can serve 6 people.

Again, the key to stress-free camp cooking is to pre-prepare.
Mix the milk, egg beaters, vanilla, cinnamon and salt together. Put aside in a sealed container.

Wash the blueberries. Set aside in a separate container. 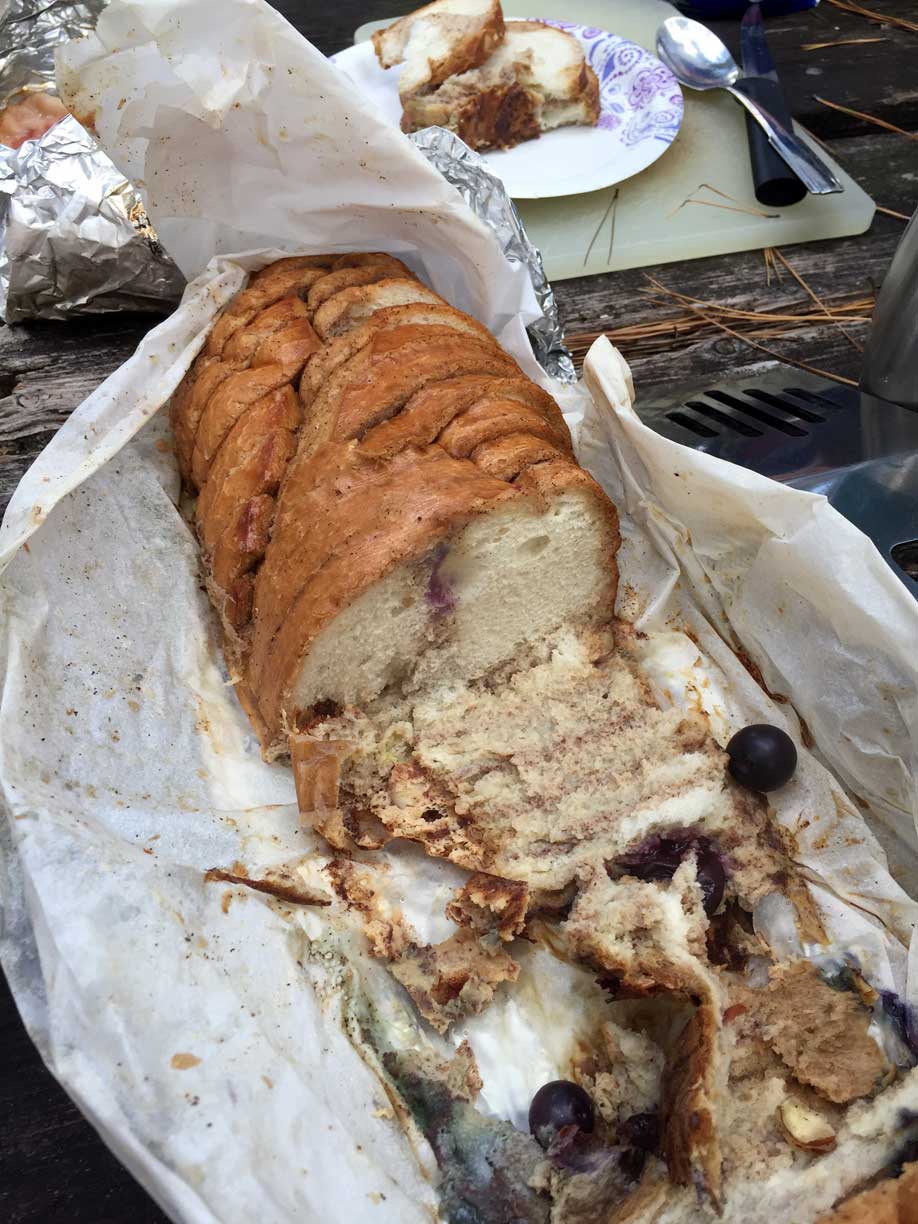 Wrap the bread in parchment paper, then in foil loosely so that the bread slices fall slightly open. Sprinkle half of the blueberries and almonds in between the bread slices. Wrap the foil and parchment paper tighter around the loaf. Pour the egg mixture over the loaf of bread.
Wrap the bread tightly with a top piece of foil to ensure no leaks. Place over the campfire or grill on low to medium heat for 35-40 minutes. If the bread still looks soggy, keep cooking it. Remove from heat and let sit for ten minutes before serving with sugar, syrup and the remaining blueberries. 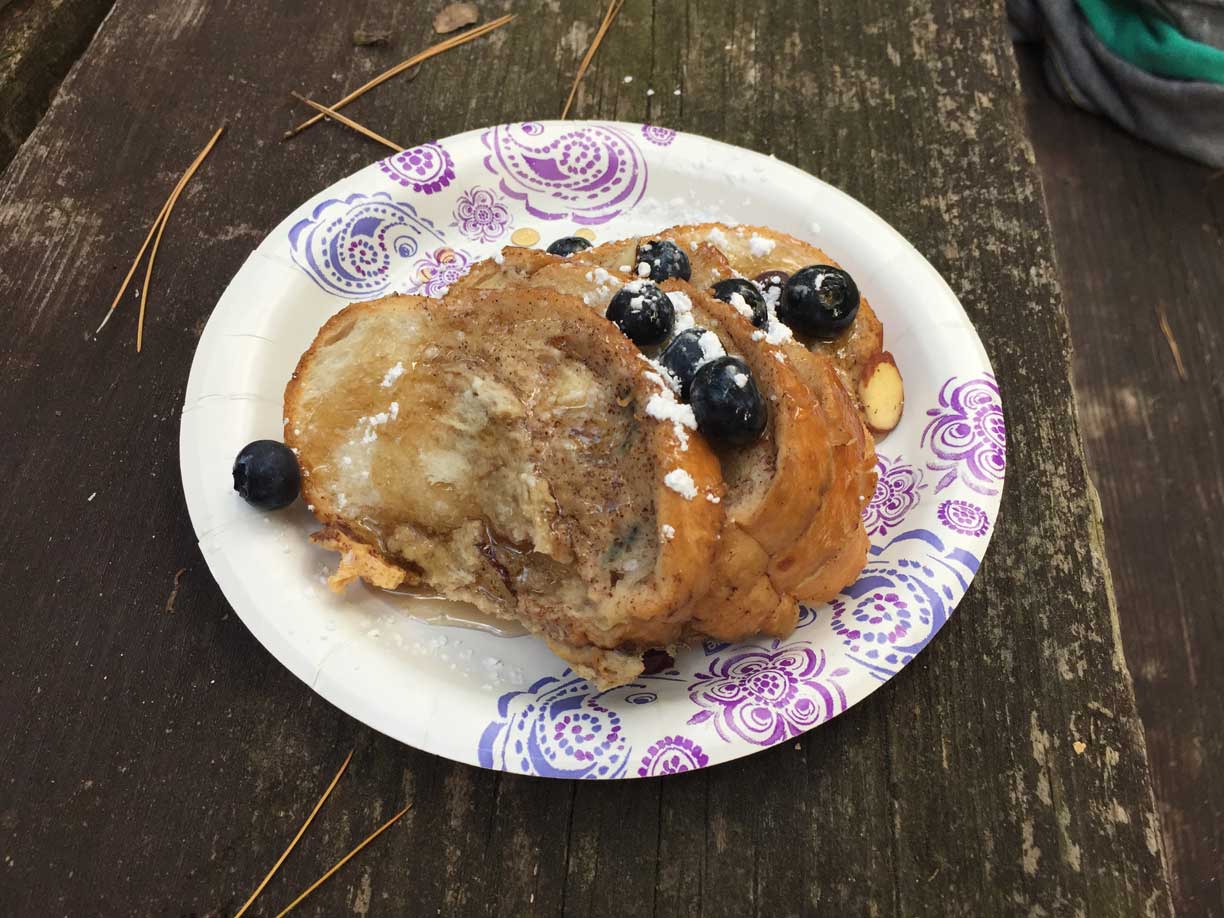 Cooking breakfast, or brunch if you’re us, is great fun. It fosters camaraderie and gives the cook a sense of accomplishment. Best of all, clean up is a breeze. You throw the majority in the trash, except for your dishes, which you take to the dishwasher when you get home. Easy peasy! 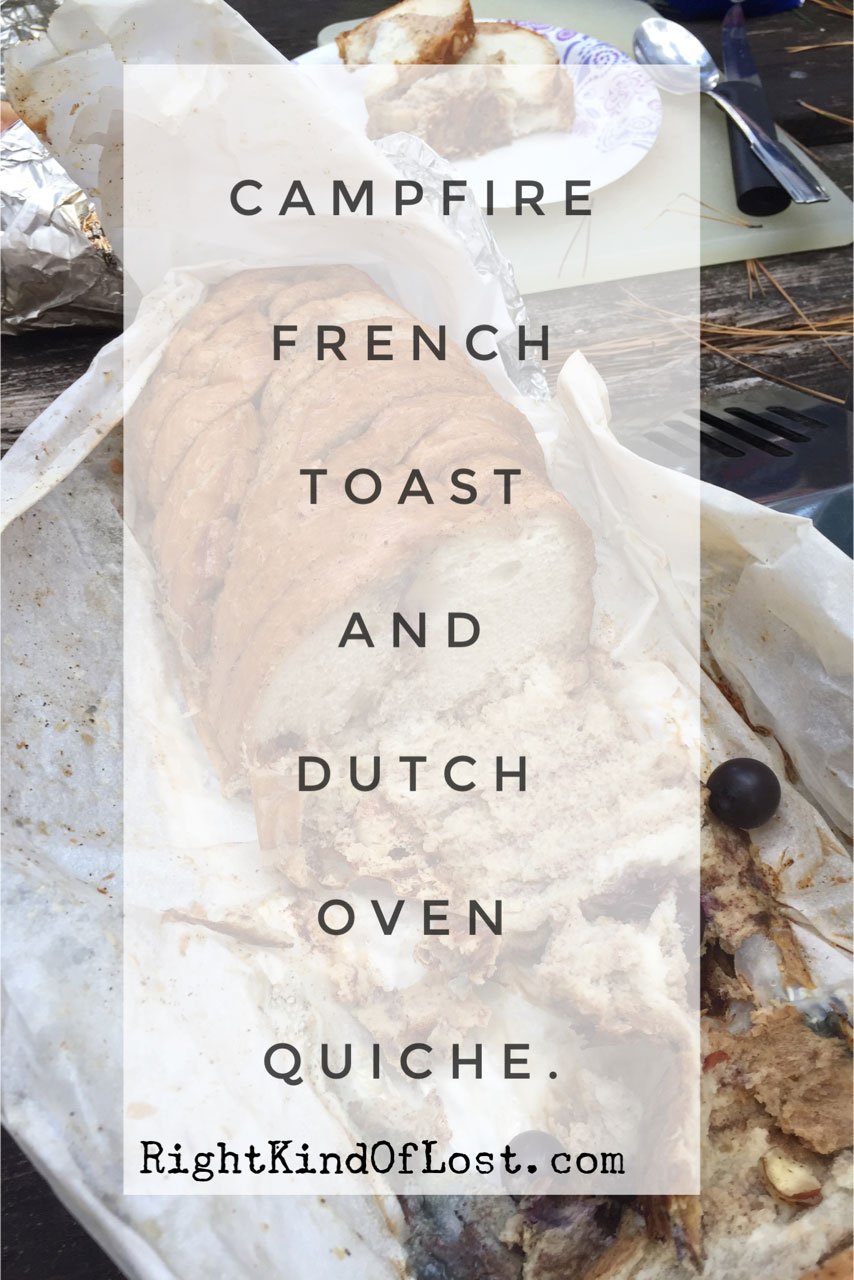