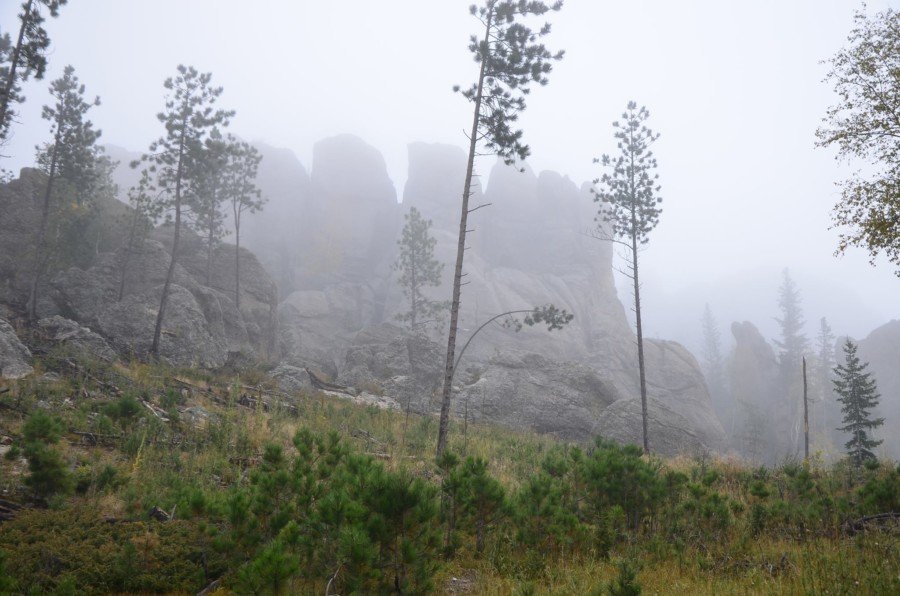 If you haven’t considered going to South Dakota for an outdoorsy vacation, you might want to reconsider. The Black Hills in western South Dakota are full of opportunities for adventure tourism.

For those of us who are in love with nature, the Black Hills will not let you down. And of course, visiting Mount Rushmore is something all Americans need to do. 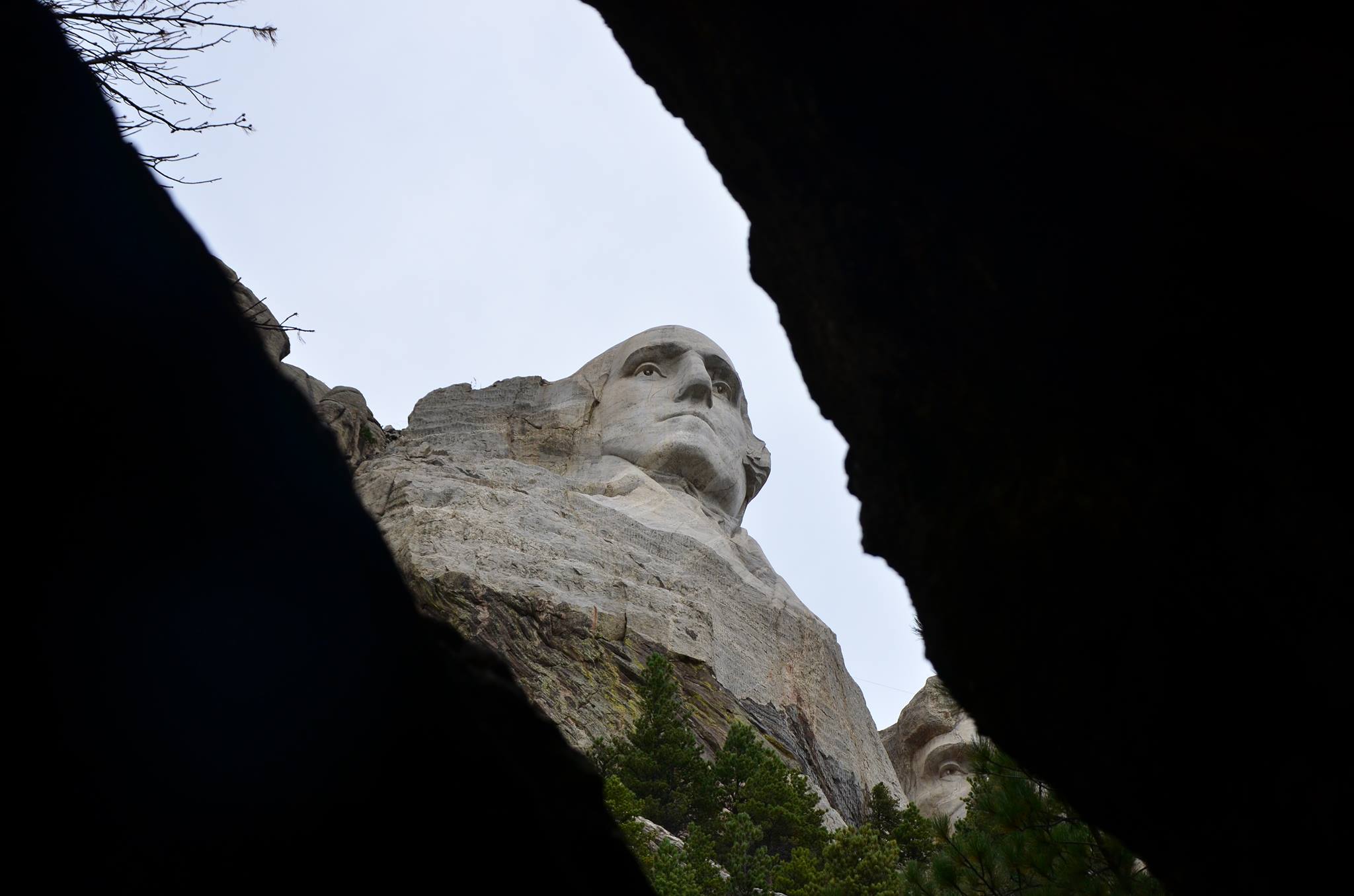 I spent a week in South Dakota in mid-September of this year visiting my aunt and uncle. They gave me the grand tour of the area. Badlands National Park is also located in western South Dakota. For my blog post on exploring that park click here.

The Black Hills mountain range is an isolated range east of the Rocky Mountains that contrast with the prairies below it. They extend into eastern Wyoming, where they are home to Devil’s Tower National Monument – the first declared U.S. National Monument. 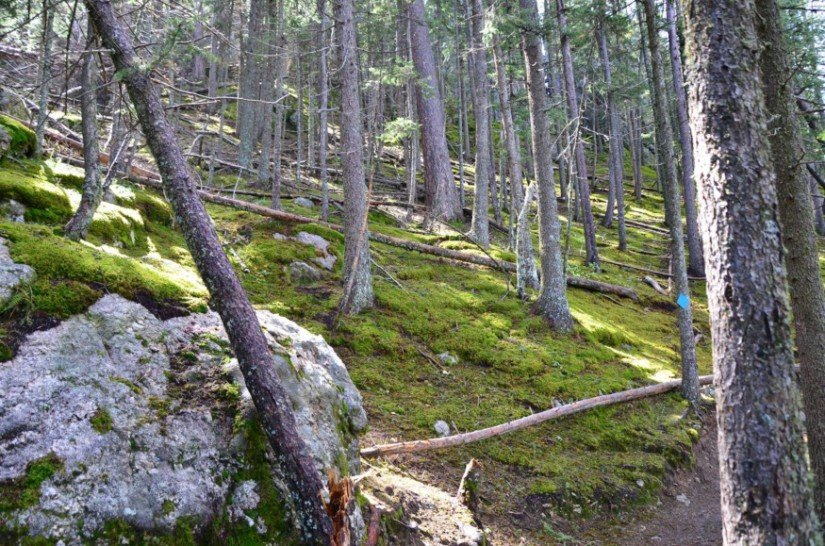 The name “Black Hills” is a translation of a Lakota word, Ȟe Sápa. Because the hills are covered in trees they appeared black in the distance to the Lakota people, which contrast with the white barren hills of the Badlands.

The Black Hills are also home to Black Elk Peak, or Harney Peak, the highest point in the United States east of the Rocky Mountains.

Even though I spent a week in South Dakota, it still wasn’t enough time to explore everything the Black Hills have to offer. On my trip we visited Mount Rushmore, explored Custer State Park, hiked Harney Peak, and explored Speerfish Canyon.

Not only is Mount Rushmore tucked into the beauty of the Black Hills, it is also nice to visit and marvel at man’s ability. Mount Rushmore National Memorial is a giant sculpture of four American presidents – George Washington, Thomas Jefferson, Theodore Roosevelt, and Abraham Lincoln. And it is giant. Each president’s face is 60-feet tall and was carved mostly by dynamite into the granite rock. 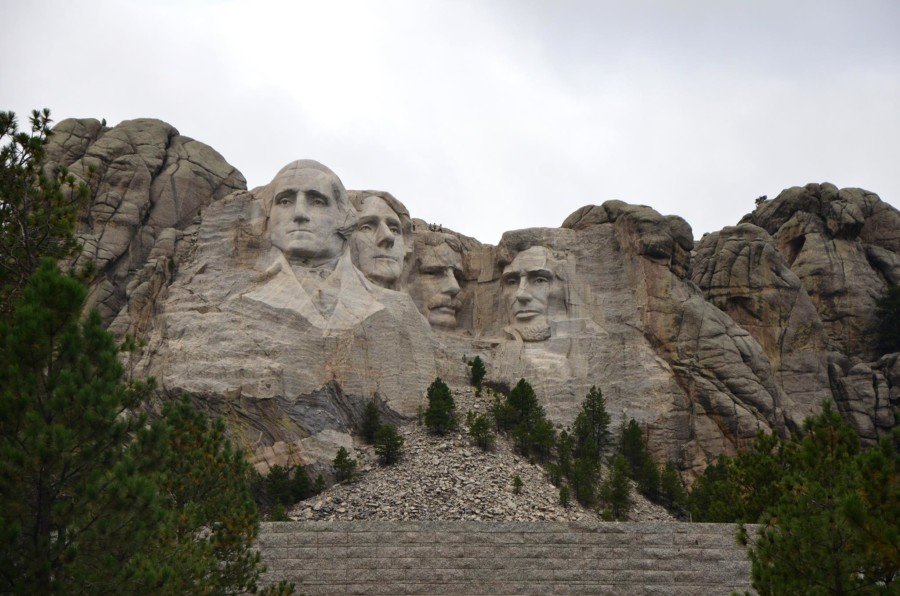 The park offers short interpretive trails, as well as museum exhibits to show visitors how the memorial was created. Construction of the memorial began in 1927, and took more than 10 years to complete.

Adjacent to Mount Rushmore, Custer State Park showcases the heart of the Black Hills. With about 71,000 acres, the park is one of the largest I have visited. 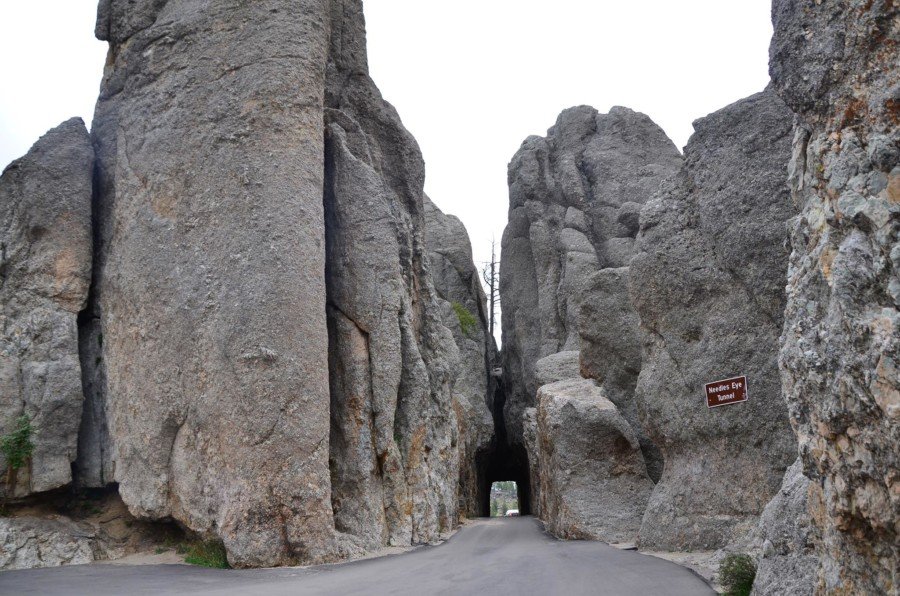 After leaving Mount Rushmore, we drove the Needles Highway and the Wildlife Loop Road. The Needles Highway is named for the needle-like granite formations that are unique to the area. If you are interested in rock climbing, this is a great place to do it. The needle formations are extremely interesting to see in person. I had seen pictures before but they do not compare to seeing them in person. They tower over you and make you feel inferior. 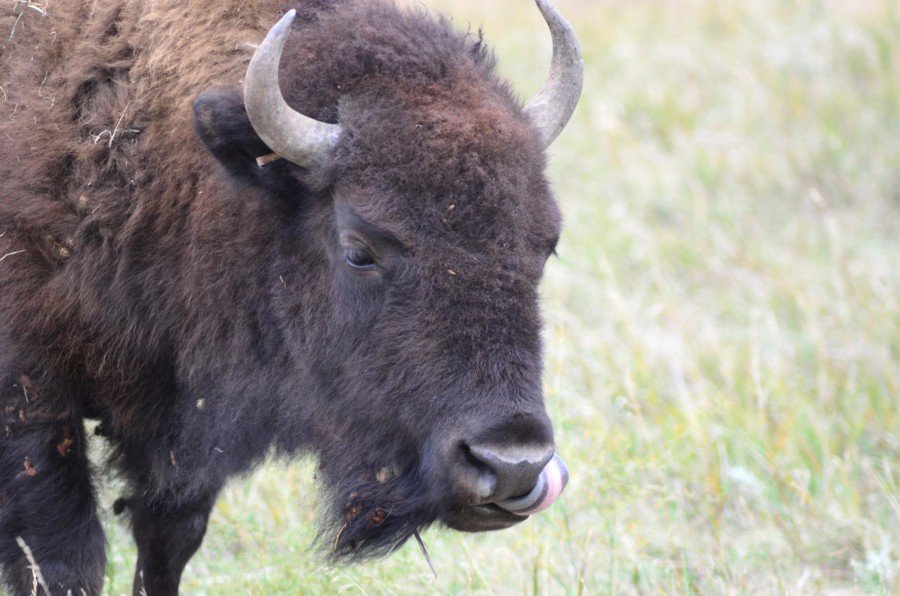 The Wildlife Loop Road is also something you need to drive. The road is 18 miles and takes about 45 minutes to drive, depending on how many pictures you take. 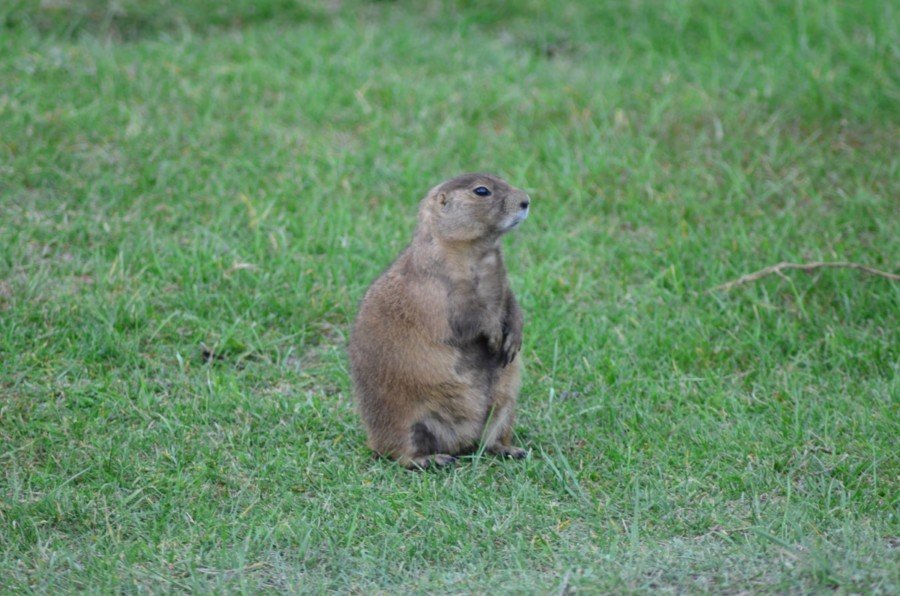 And if you are interested in wildlife as much as I am, you will probably take a bunch. We saw herds of buffalo, burros, prairie dogs, and other animals native to the area. I also loved driving through the unique terrain of the Black Hills. 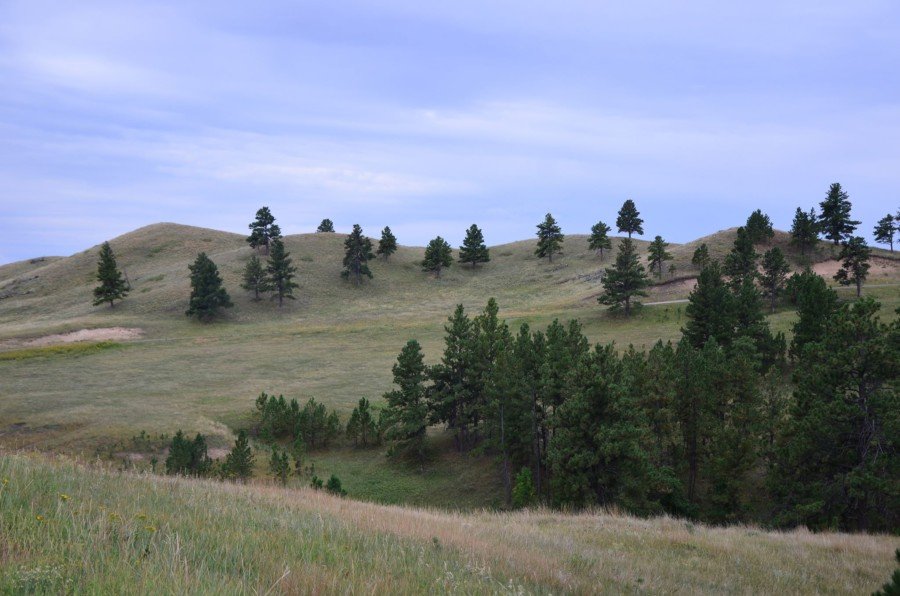 Harney Peak rises 7,244 feet above sea level, and provides you with a view unlike any other in the area. 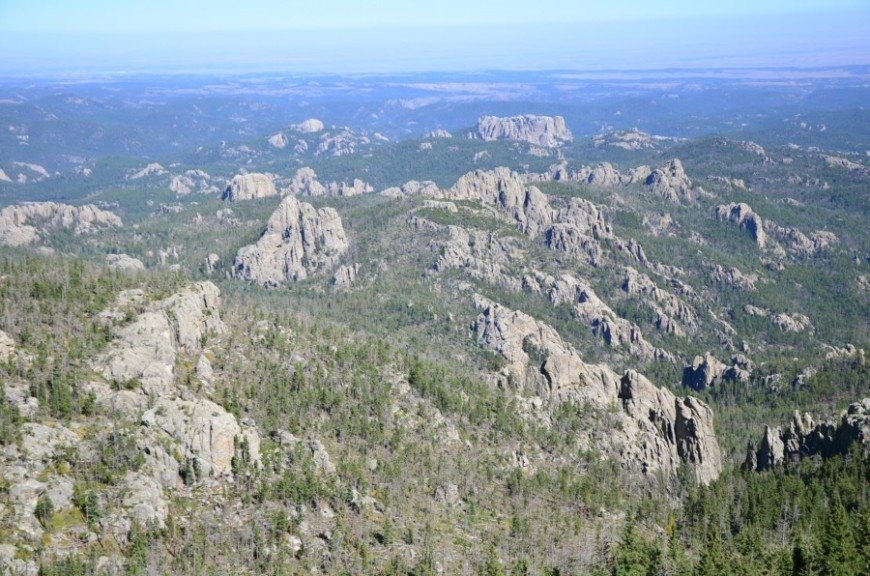 There are a few routes that take you up to the summit of Harney Peak. My uncle and I began our trek at the Little Devil’s Tower trailhead. We hiked to the peak via Trail 3 and 4 and back to the trailhead via Trail 9. A map of the trails can be viewed here. We took the spur trail to Little Devil’s Tower, which is quite steep. To get to the top you almost have to rock climb. We scampered up the rock face and made it to the top, but it is definitely not a trail for those who are afraid of heights. If you are, I would suggest skipping the spur trail. 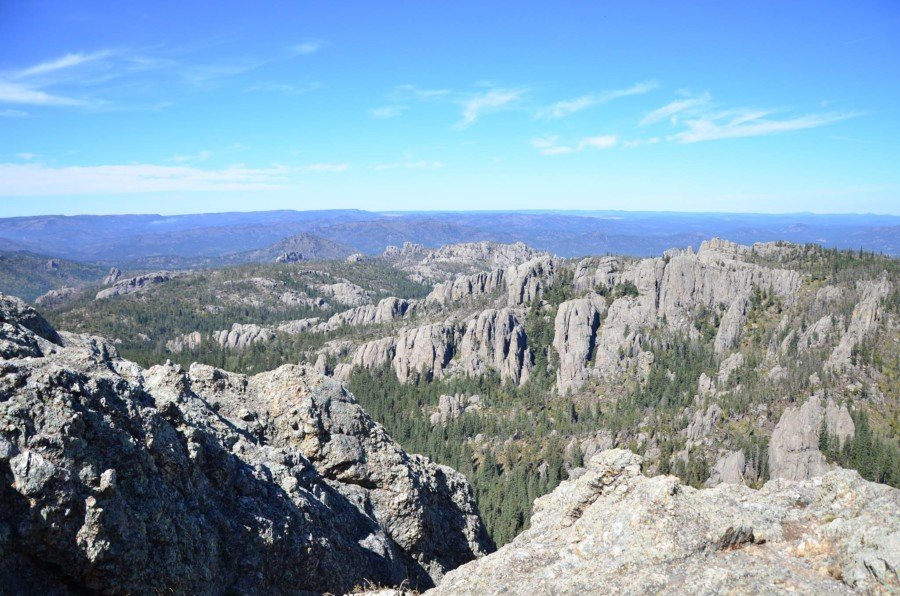 Counting all the trails combined we hiked about a 10 mile loop. The scenery was amazing and more than worth the sore feet at the end of the day. The trails were not too steep (minus Little Devil’s Tower) until we got to Harney’s peak, but even then it wasn’t too bad. 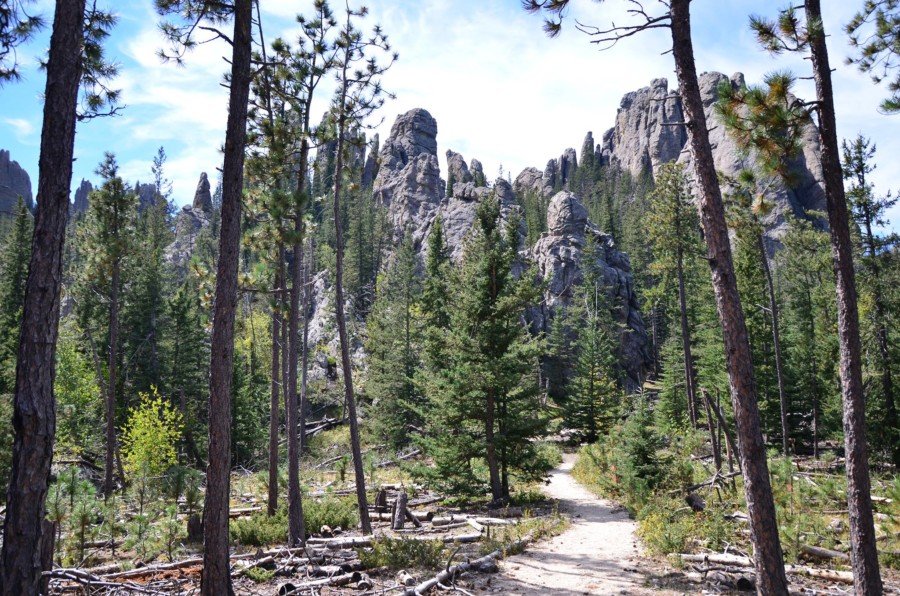 The peak definitely gave me the feeling of being on top of the world. I loved looking down at the granite rock formations that dot the Black Hills.

My aunt, uncle, and I drove the scenic byway through Spearfish Canyon. Although I was there a little early for fall, there was some color in the canyon. The yellows popped out of the 1,000-foot-high canyon walls. 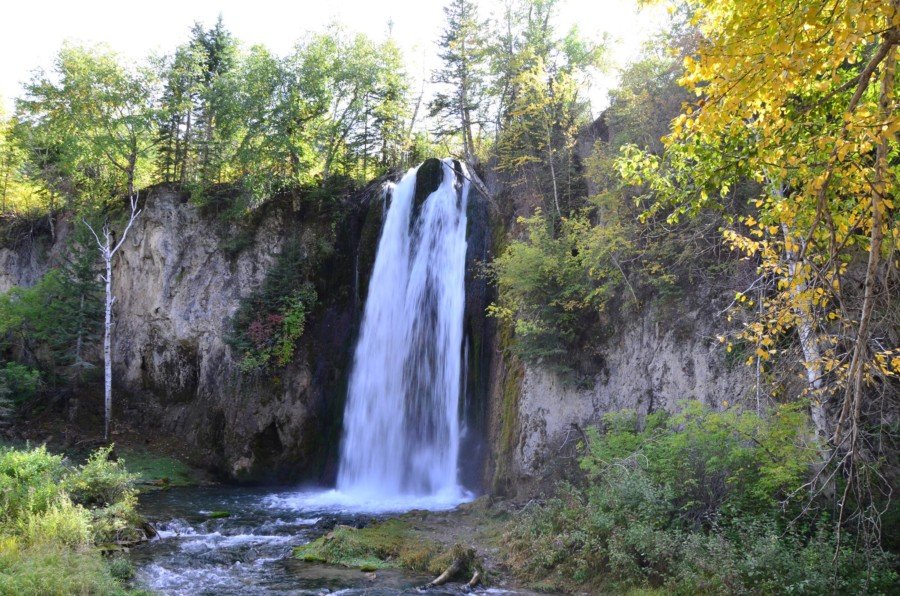 The canyon was carved by Spearfish Creek, which provides travelers with several beautiful waterfalls. We stopped at Bridal Veil Falls and Roughlock Falls, which did not disappoint. 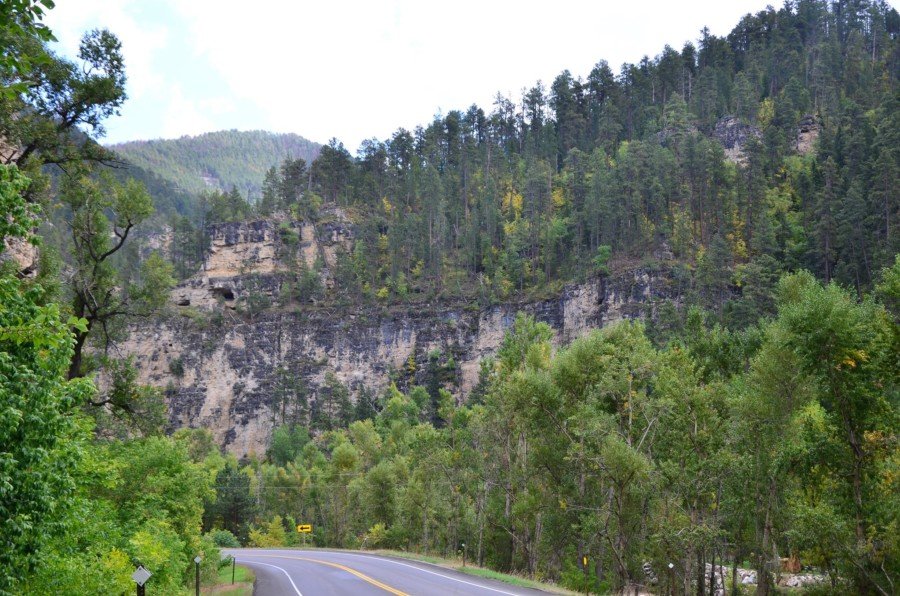 Other attractions in the Black Hills

There are several awesome small towns rich with culture and history throughout the Black Hills. We drove through the historic town Deadwood and shopped for antiques in other charming towns.

Wind Cave National Park is also located in the Black Hills. Like I said, I did not have enough time to explore everything they have to offer.

2 thoughts on “Exploring the Black Hills in South Dakota”