Falling Out Of The Boat 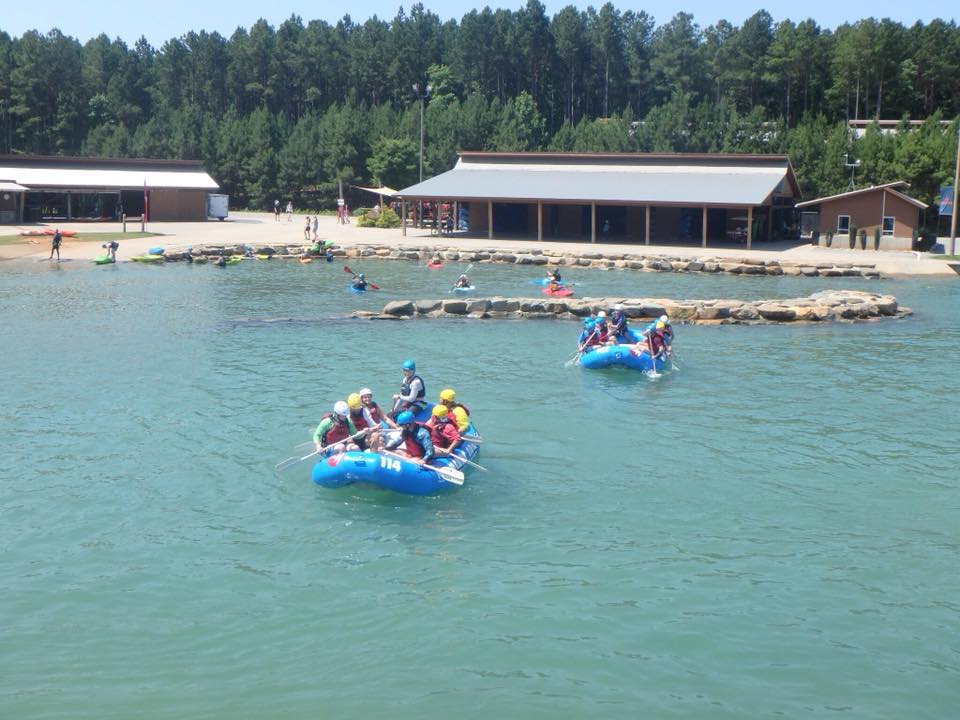 In late June my sister and I traveled to Charlotte, N.C., to visit our two cousins. A few weeks before, my sister asked if I was sure I didn’t want to bring our kayaks. I hadn’t even thought about kayaking in North Carolina, only hiking. Because we already had too much we wanted to do and I didn’t relish the idea of driving 12 hours with kayaks on top of the car, we decided not to take them.

But on our way, my cousin texted and said that Charlotte is home to the U.S. National Whitewater Center. And she asked if we wanted to go on a family whitewater rafting trip at the center.

Um, yeah we are definitely not pros. And since we love the water, we were totally down and psyched to do it.

When we got to the whitewater center, I instantly saw that this was my kind of place. In fact, it actually felt like I was walking onto a movie set. People were riding up on mountain bikes, walking around in kayak skirts, and dressed like they were straight out of an REI catalogue.

“This cannot be real,” I thought. The U.S. National Whitewater Center offers whitewater, flatwater, and climbing activities, as well as ziplining, ropes courses, and mountain biking – totally my kind of place.

We signed our obligatory “I know this is risky” waiver and signed up for the Family Adventure Rafting Trip. The whitewater center offers two levels of whitewater rafting – family and adventure.

We met up with about 30 other eager rafters at our appointed time to listen to a 15-minute “safety talk.” To which I thought, “Yeah, they have to tell us all this stuff for insurance and legal reasons. I know what I’m doing.” But later on, in the event previously stated, I’m was glad that I paid attention.

We listened as they told us not to stand up in the current and how to go with the flow, pointing our feet down river so we could use them to bounce off of rocks and not get snagged on anything. They told us how to grab the rope so we could be safely pulled to the bank.

After the safety talk when went to gather our protective gear – a PFD (personal floatation device) and helmet. Then they called out our group names and placed us with a guide. Because our group had only six people they placed a young couple, Victor and Victoria, with us. And yup, those were their real names. 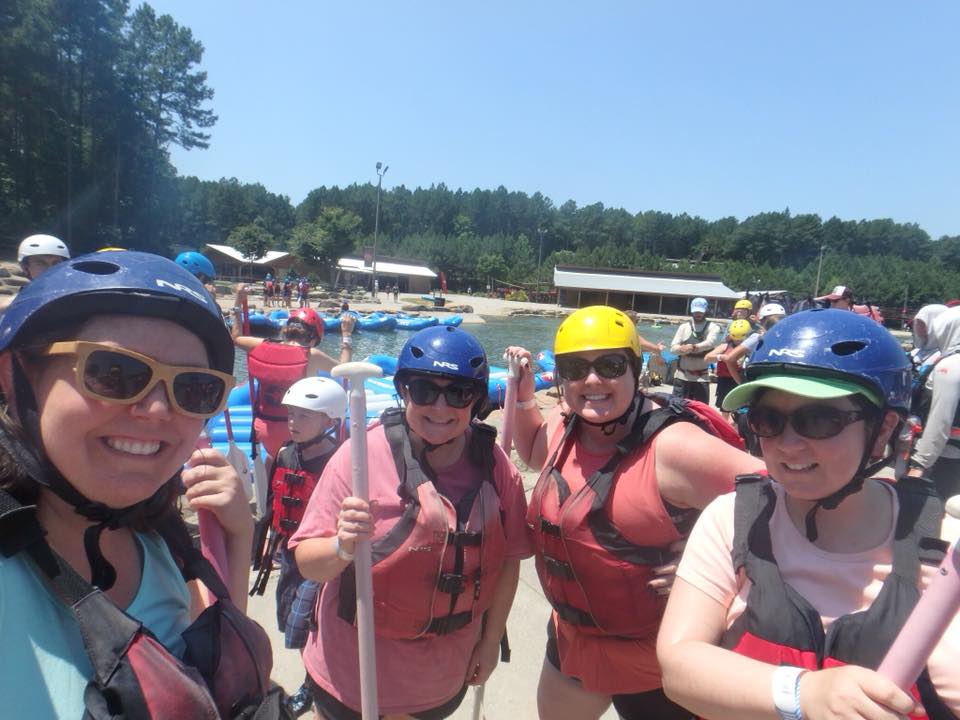 Our guide asked who had been whitewater rafting before and I was the only one to raise my hand. Later we joked about how the only one with experience was the one who fell out of the boat.

The river is a man-made river and makes a loop. During the entire float, we went around the river three times. However, on our first time around the second set of rapids is where I fell out of the boat.

After gaining my bearings I remembered to point my feet down river and go with the flow. I was so amazed at how strong the water and the current were. I had very little control over myself. A lifeguard was yelling “Swimmer” to get my attention, but my head was bobbing under the water, and it was hard to understand what he was saying. 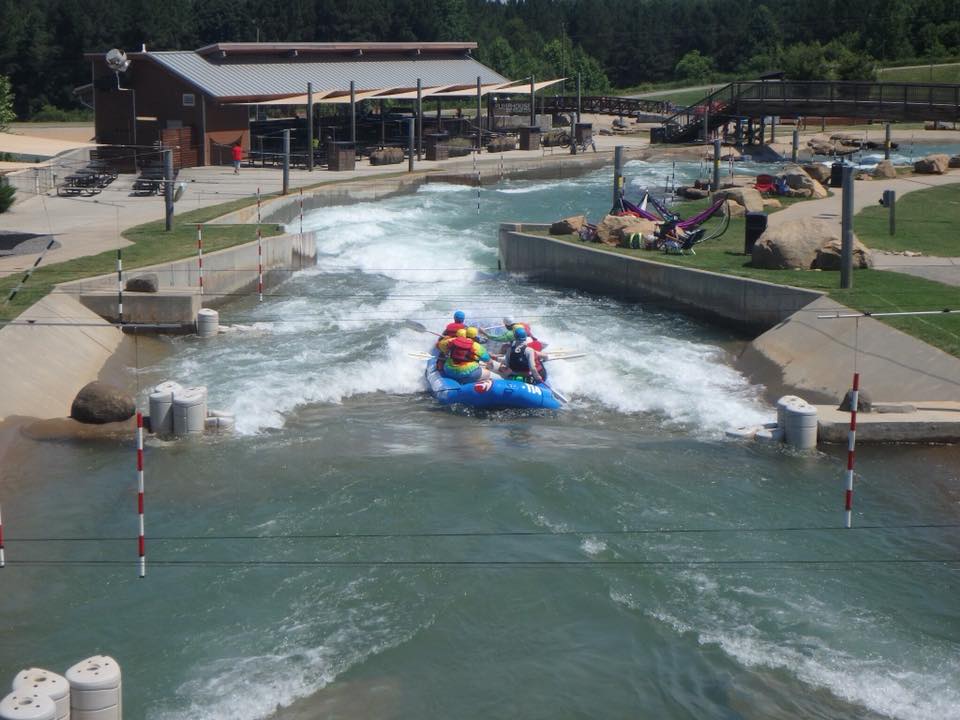 Then one threw a rope to me. Woohoo, I was going to show off how much I paid attention. As I readied myself to catch the rope, he tossed it, and to me it looked like it only went four feet – way out of my reach. Then another guard threw another rope but it landed behind me and the current pushed me down the river faster than the rope, and I couldn’t get it.

My cousin said later that when she was watching from the boat, she thought it was all a comic act. She thought that the guide had pulled me aside and asked if I wanted to be in on a joke. It wasn’t a prank, but it really was comical.

An extremely nice kayaker stayed with me and attempted to help me. The only problem I had was I still had my paddle in my hand. This really inhibited my ability to swim. I wracked my brain, what did they say in the safety talk? Do you drop the paddle?

By the time I reached the pool at the end of the rapids the kayaker told me I was safe. Had I fallen out on our second or third time around, I would have know that the pool was the end of the river. When the rafts get to this part, they take a conveyor belt up to deposit them above the river so they can float it again. 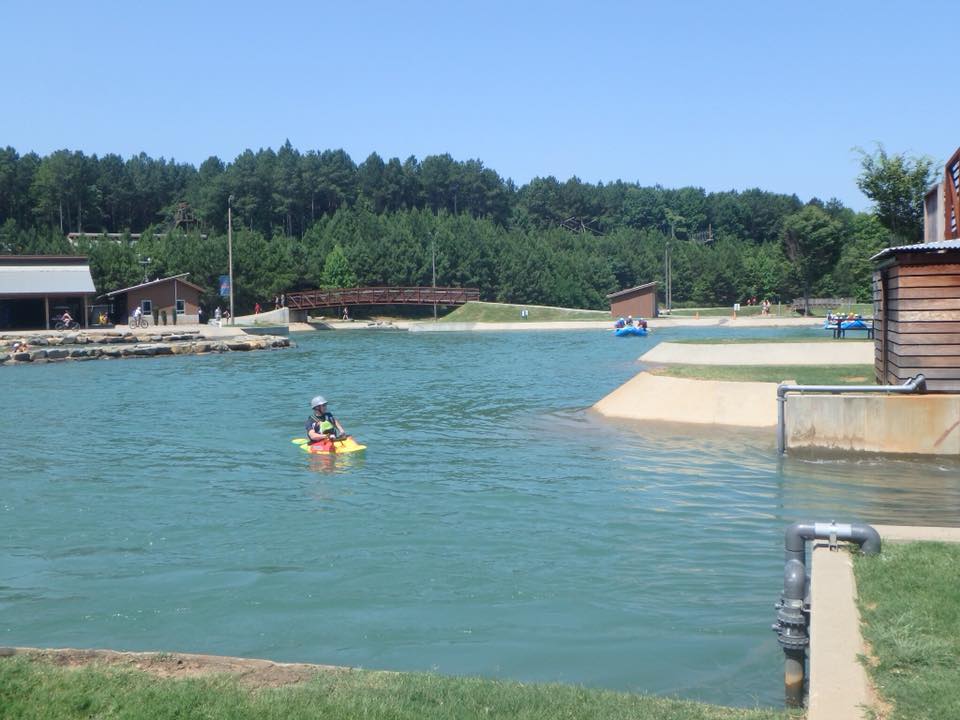 Another rafting boat came to my rescue at this point. They attempted to haul me into their boat and struggled. Then a woman said, “Wait! Dunk her under water.” They paid attention in the safety talk too.

They pushed me under the water and the buoyancy of my PFD pushed me up and they were able to haul me into their boat. Then our boat came close, and I was able to jump back into the boat with my family.

One main point I think is important to make is that I did not panic. I knew I was in a controlled environment. I also knew that this happens at least a few times a day and they have a trained staff that is ready for it.

Because I did not panic, I was much safer in the water, and I actually enjoyed it. As a kayaker who never does anything more than class II and get nervous when I see them coming, I was glad to experience what it is like to be at the mercy of the river in a such a controlled and safe atmosphere.

I also learned the importance of wearing your PFD and helmet.

We went around the river two more times, and I thoroughly enjoyed it, although I didn’t sit as close to the edge of the raft.

In the beginning my cousin was afraid we might be bored because we kayak all the time at home. But in the end, it was far from boring.

2 thoughts on “Falling Out Of The Boat”