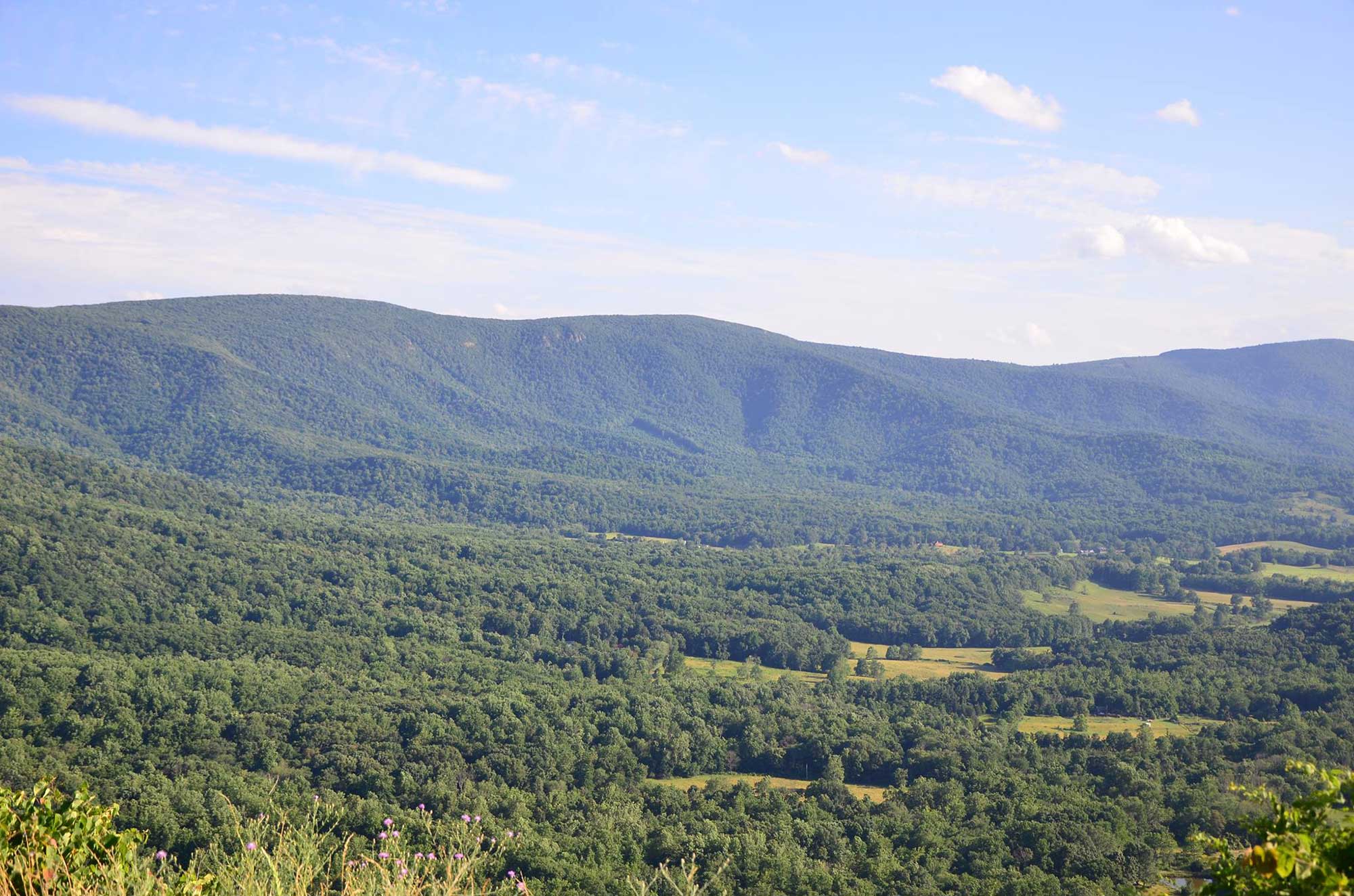 I have always heard Shenandoah National Park is more beautiful than words can describe. And it really is, but I’m going to try my hardest to tell you how beautiful it is in this blog post. I have also included many pictures to help show you.

My friend, Lagena, and I planned on tackling the White Mountains in New Hampshire for this year’s summer trip. But then the trip up north did not go as planned. At the beginning of the trip, I hoped we could at least drive through Shenandoah National Park on our way home. But when New Hampshire didn’t work out, we left New England to spend the rest of our trip at Shenandoah.

Shenandoah National Park is in Virginia, on the western side of the state. It showcases some of the best of the Appalachian Mountains. 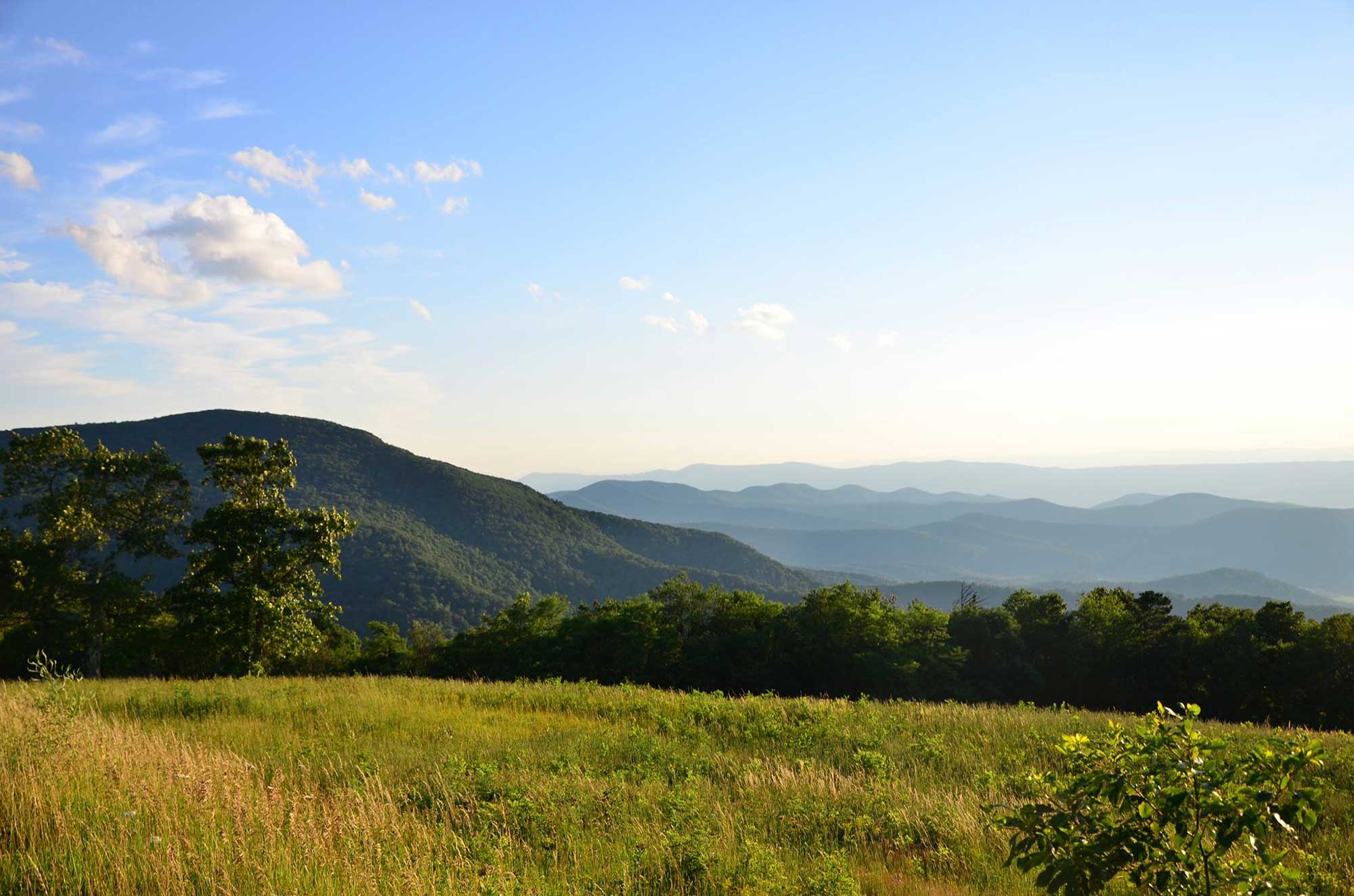 It is a long and skinny park that encompasses a ridge line in the Appalachian Mountains. One of the main attractions is Skyline Drive, a road that stretches about 100 miles along the ridge. But more about that later.

I have heard many people who hike the Appalachian Trail look forward to hiking in Shenandoah National Park the most. 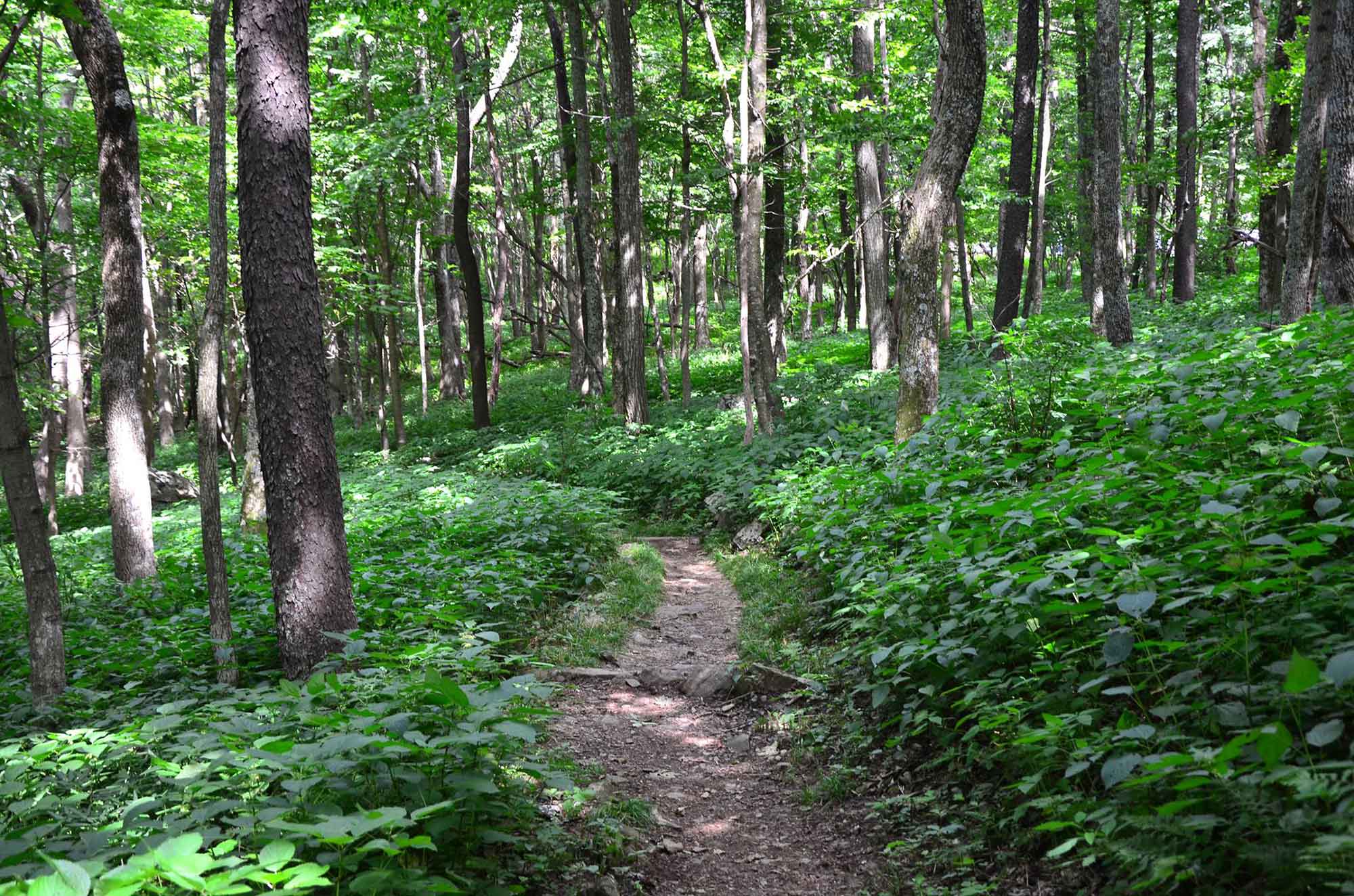 And when our trip in New Hampshire began to sour, we had a gut feeling that we would get to Shenandoah and the trip would redeem itself. And it truly did. We both said, we wished we had spent the whole trip at Shenandoah National Park, but hindsight is 20/20.

Because it was an impromptu trip, we only had two days to spend in the park.

When we left New Hampshire, we had a 12-hour drive to the park. Most of the campgrounds are first-come-first-serve, and we were there the weekend after the Fourth of July. I was worried we may not find a site coming in so late, so we opted to book a hotel near the park and look for a campsite the next morning. 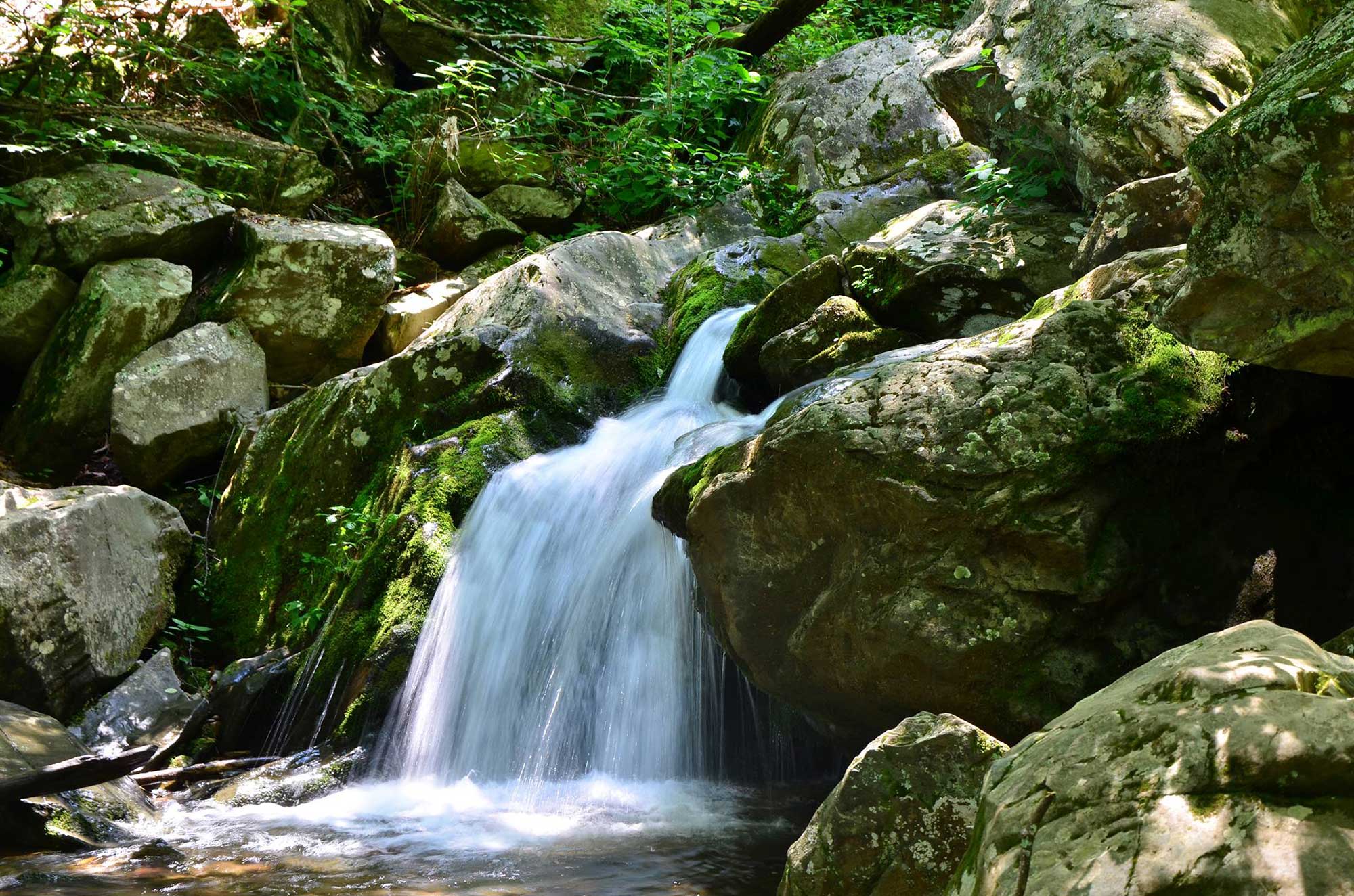 Apparently the we made the right choice because the park was full that night. We arrived at about 10 a.m. on Saturday, and there were open spots but not many. We were able to secure a spot in the Lewis Mountain Campground, which is in about the middle of the park.

I was glad we were in the middle of the park. Because we only had two days, we could split the trip into exploring the north half one day, and the south half the next day.

Finding grub, or a room

After we set up camp, we went to explore the north side of the park. Not far to the north of Lewis Mountain Campground you can find Byrd Visitor Center and the Big Meadows complex. 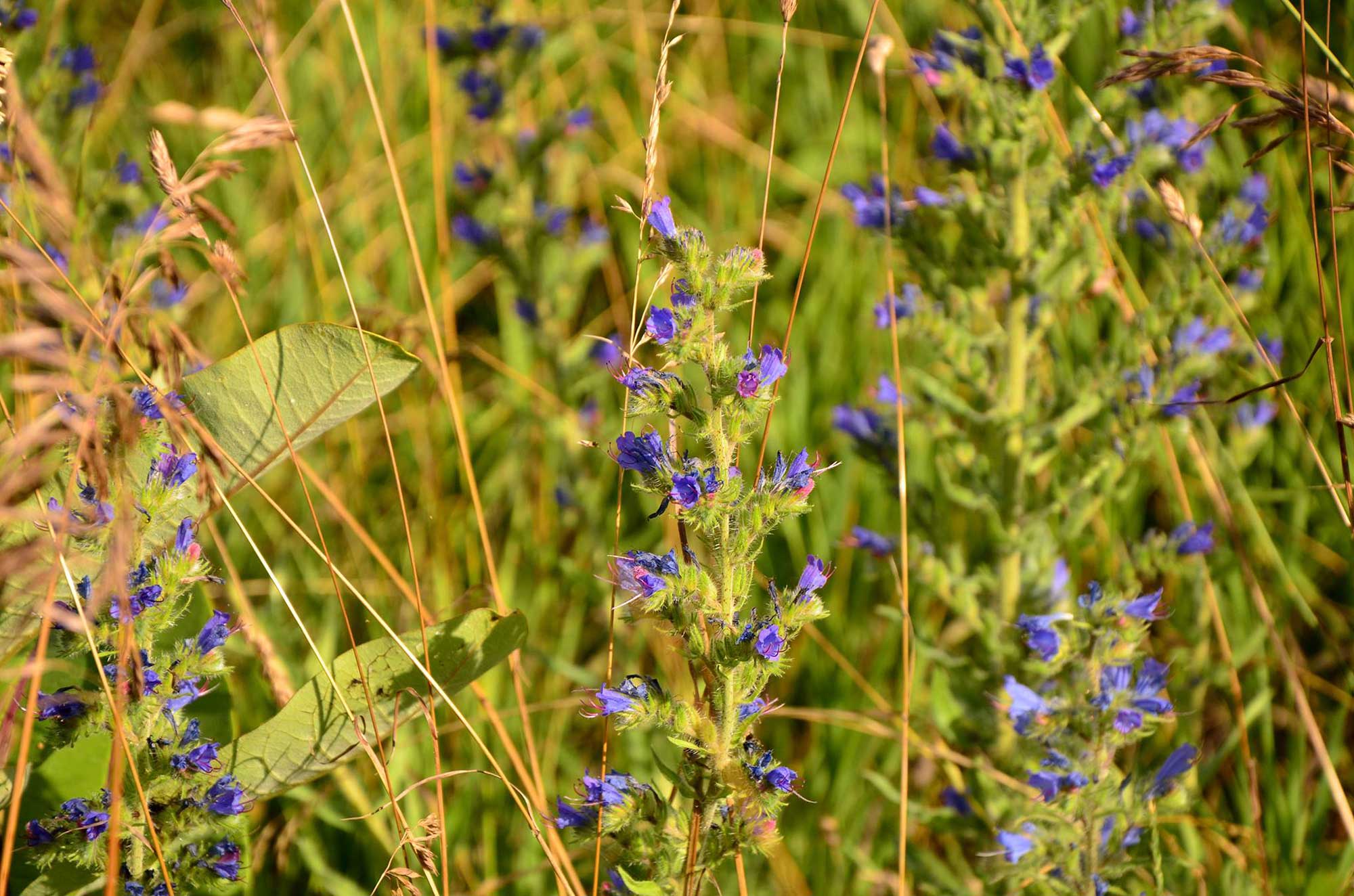 Big Meadows has gas, a store, and restaurant. We ate lunch in the restaurant, which wasn’t the best. But I figure if you are thru-hiker on the AT, it was probably pretty good.

One thing I love about New Hampshire and Shenandoah National Park is seeing all the thru-hikers and the backpacking community. At the restaurant at Big Meadows we saw a great deal of backpackers.

We chose to hike a vista trail and a waterfall trail, and we asked for trails that were around five miles. Because our visit to Shenandoah was an impromptu trip and I was running out of cell phone data so I couldn’t do any research on the road, we asked the wonderful workers at the Byrd Visitor Center to suggest some trails for us. 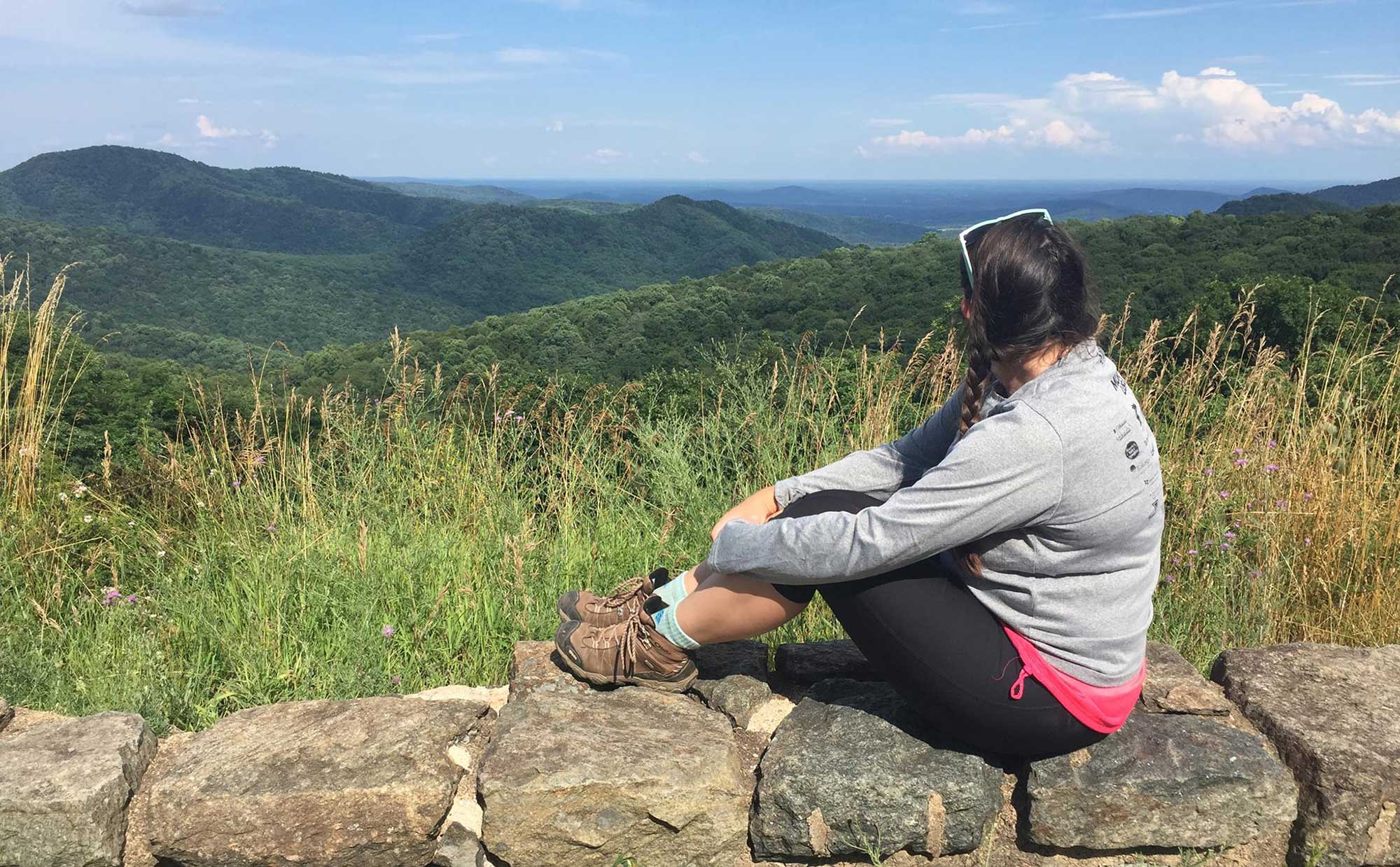 Also a fellow #teamHLAW ambassador lives in the area and directed us to some awesome hikes.

I highly suggest discussing trails with park personnel before you hike them. We told her we wanted steeper uphill than downhill, and she advised us which way to hike the loop to accommodate that. Also on our waterfalls trail, she directed us to hike the loop in the way that we would walk toward the cascades and not have to keep turning our heads to view them.

The first hike we did in the park was to Hawksbill Gap. The Hawksbill is the highest peak in the park at 4,051 feet above sea level. 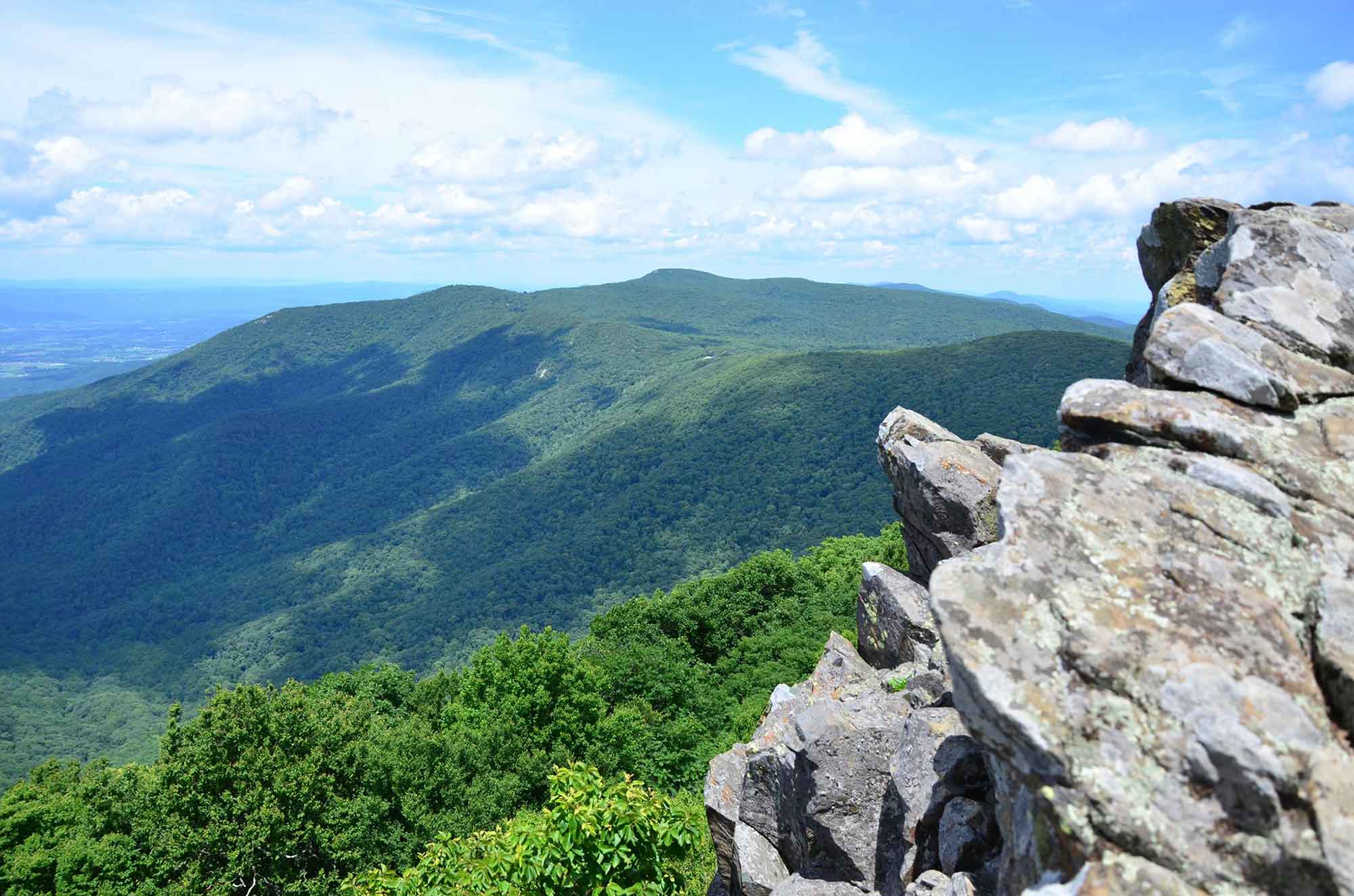 I also loved hiking along the AT. Someday hopefully I will hike the whole trail, but for now I’ll settle for a mile and a half.

After leaving the parking lot, we hike the Lower Hawksbill Trail to the Hawksbill Viewing Platform. We then backtracked a little bit and then took the Salamander Trail to the AT. From there we hiked back to the car.

The scenery from the Hawkbill Viewing Platform shows you the Shenandoah Valley, along with the folds of the Appalachian Mountains. It truly is breathtaking.

The forest was lush and green, and I loved seeing the ferns and other understory that blanket the ground. 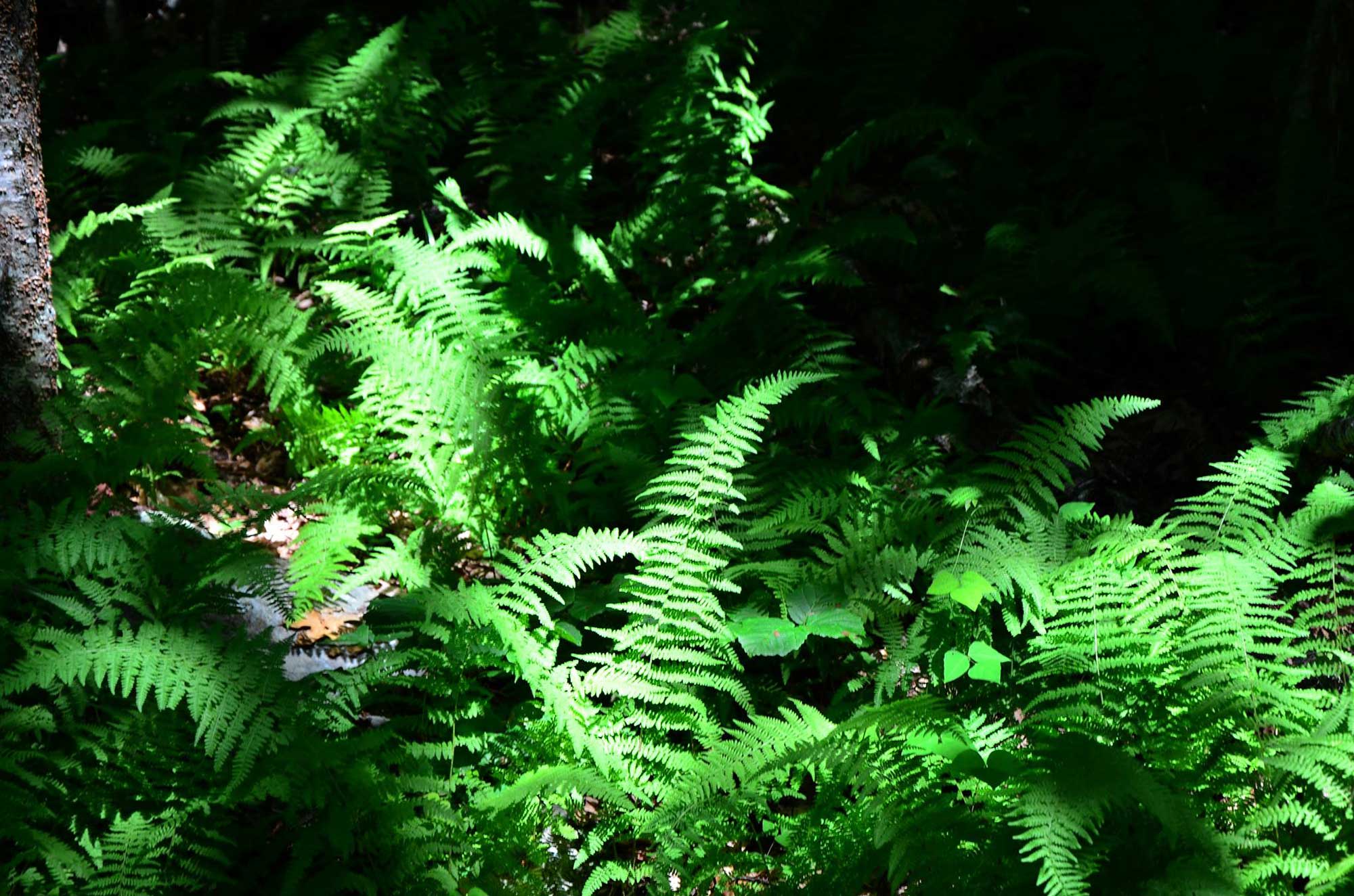 The trail is fairly steep at first, but after the initial climb it levels out for a smooth hike. Because of the beauty from the vista and relatively easy hike, the vista at the Hawksbill was a little crowded.

On our second day, we hiked another loop that showed us two amazing waterfalls, along with many smaller cascades.

We began our hike at the Byrd Visitor Center. Then we hiked parallel to the highway to the Story of the Forest Trail where we turned left and hiked a little ways until we came to an intersection with the Skyland-Big Meadows Horse Trail. It also parallels the highway. 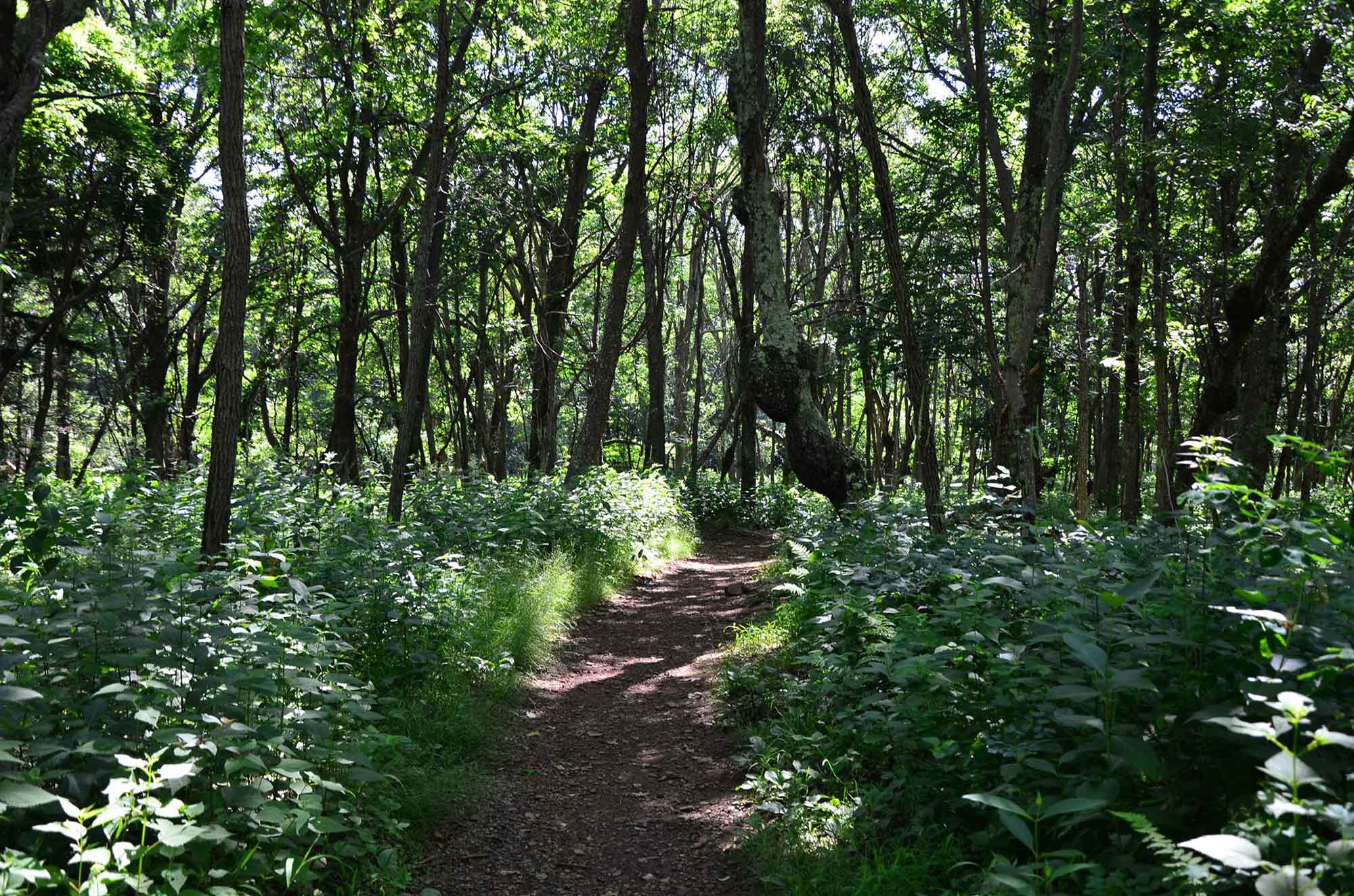 I really liked this part of our hike because the ferns and understory were so beautiful. When the trail went back toward the highway, we crossed the road and continued on the horse trail until it intersected with the Rose River Loop Trail.

We soon came to Rose River Fall. The waterfall cascades down 67 feet and into a beautiful pool. 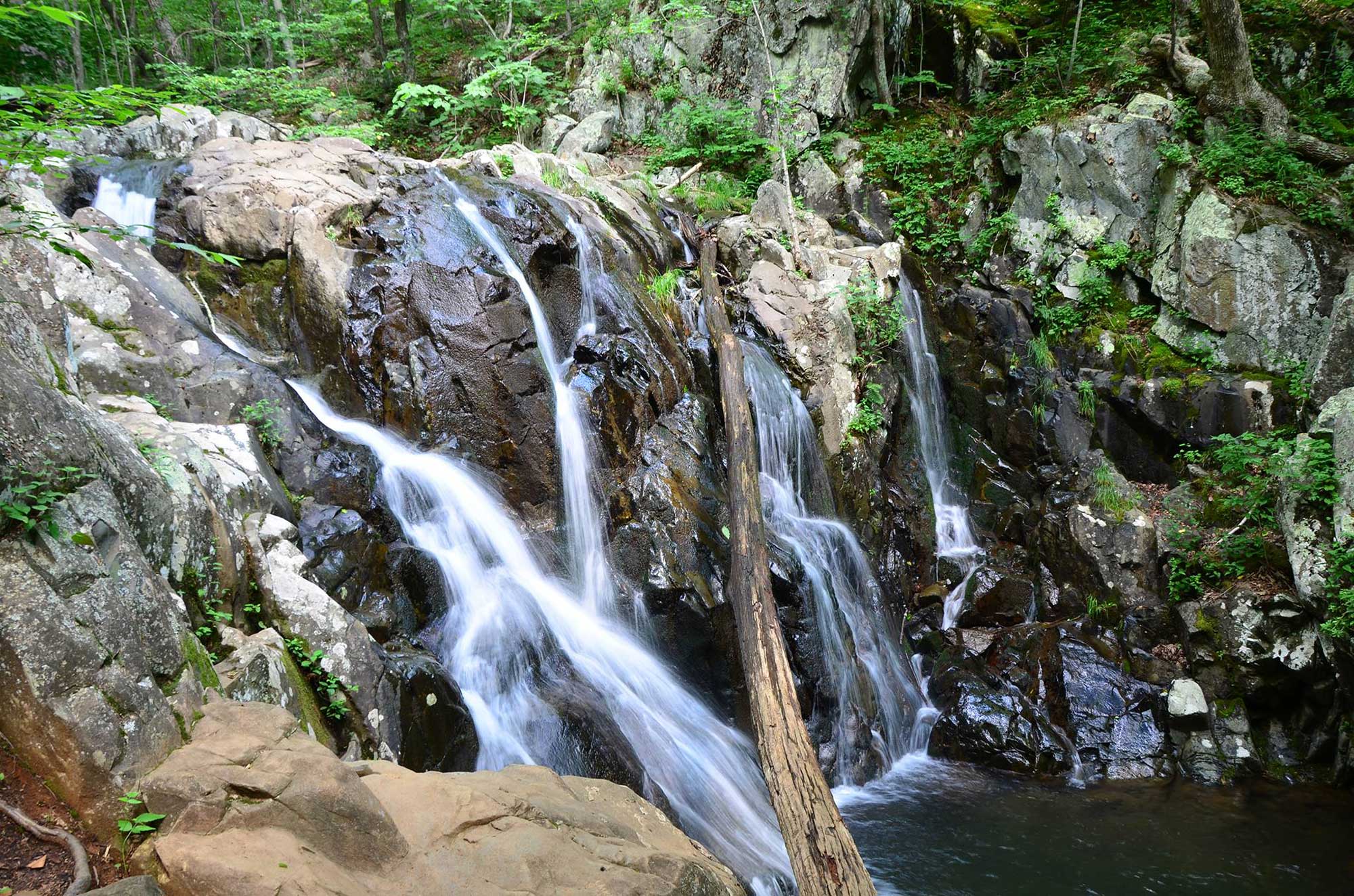 I was really pleased with the direction we were told to hike because the cascades in all the streams were very beautiful.

When we came to Dark Hallows Falls, a 70-foot cascade. It was magnificent. However, a lot of people must think that because it was extremely crowded. But it was still worth seeing.

After Dark Hallows Falls, the trail steeply climbs back to the highway. We then hiked the same half mile we hiked at the beginning of the trail back to the visitor center and our car.

Through the middle of the park, Skyland Drive takes visitors 105 miles along the crest of the mountains and showcase the beauty of the Blue Ridge Mountains.

There are 75 scenic overlooks, so you can pull over and snap pictures of the folds, peaks, and valleys of the mountains. 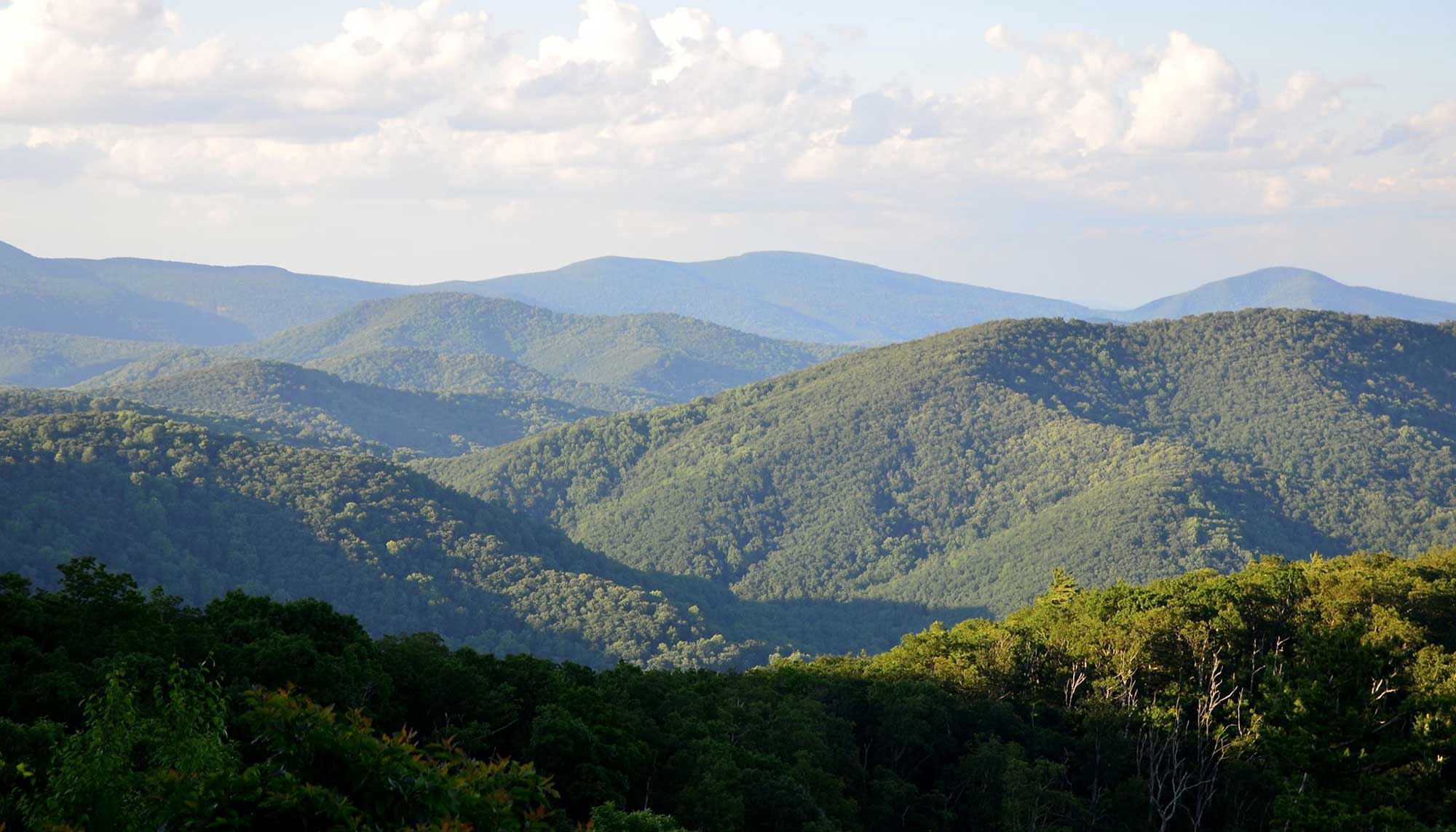 Photographer Pro tip: Sunrise and sunset are best for photos as they create shadows and depth to the mountains.

Some of the pullouts offer informational placards that educate you about the area. 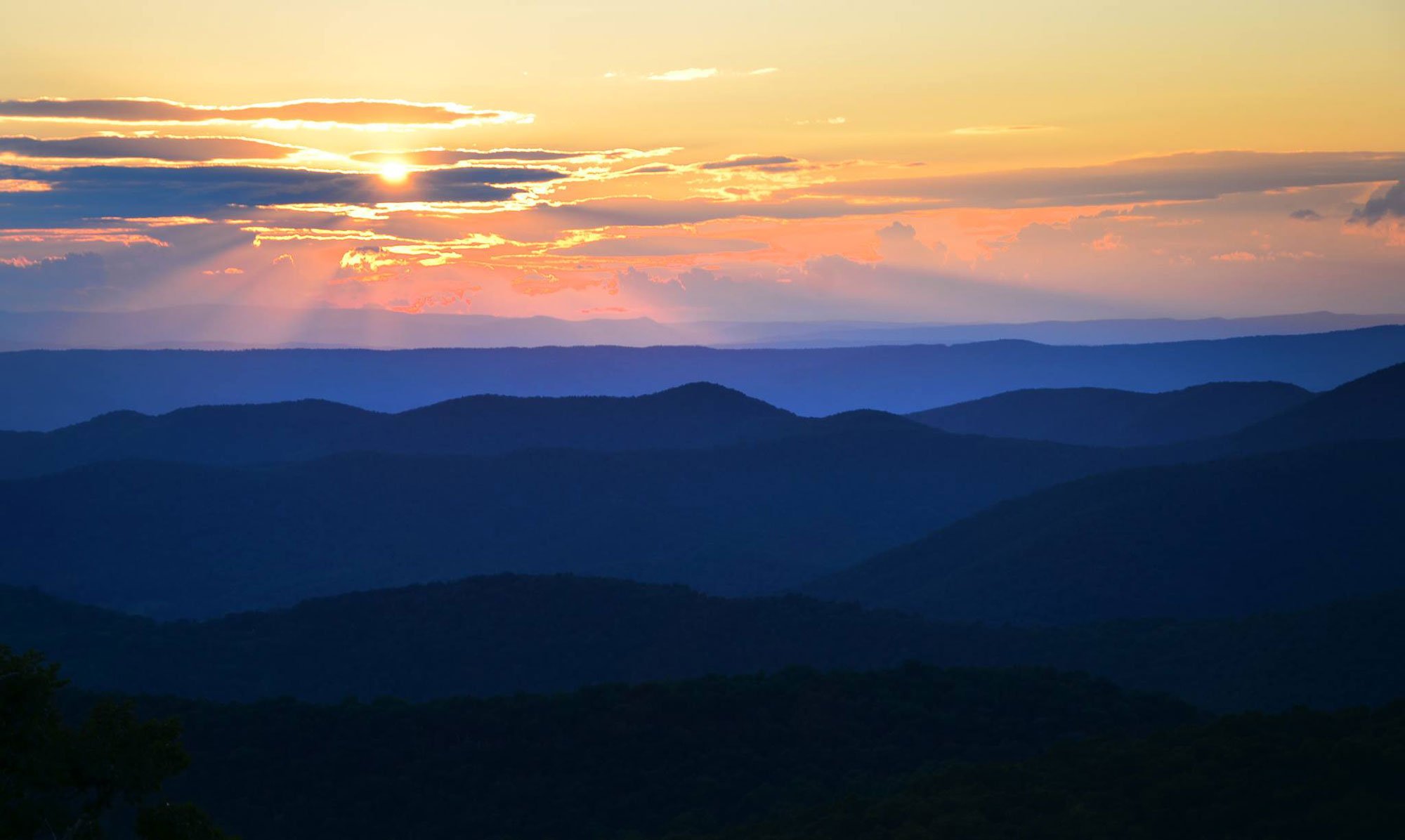 In addition to looking over the peaks and valleys of the Appalachian Mountains, the overlooks also give you glimpses of the Shenandoah Valley and the towns below. I also really enjoyed seeing the cleared patches of pasture land.

Once you leave the south end of Shenandoah National Park, Skyline Drive turns into the Blue Ridge Parkway, which is also operated by the National Park Service. 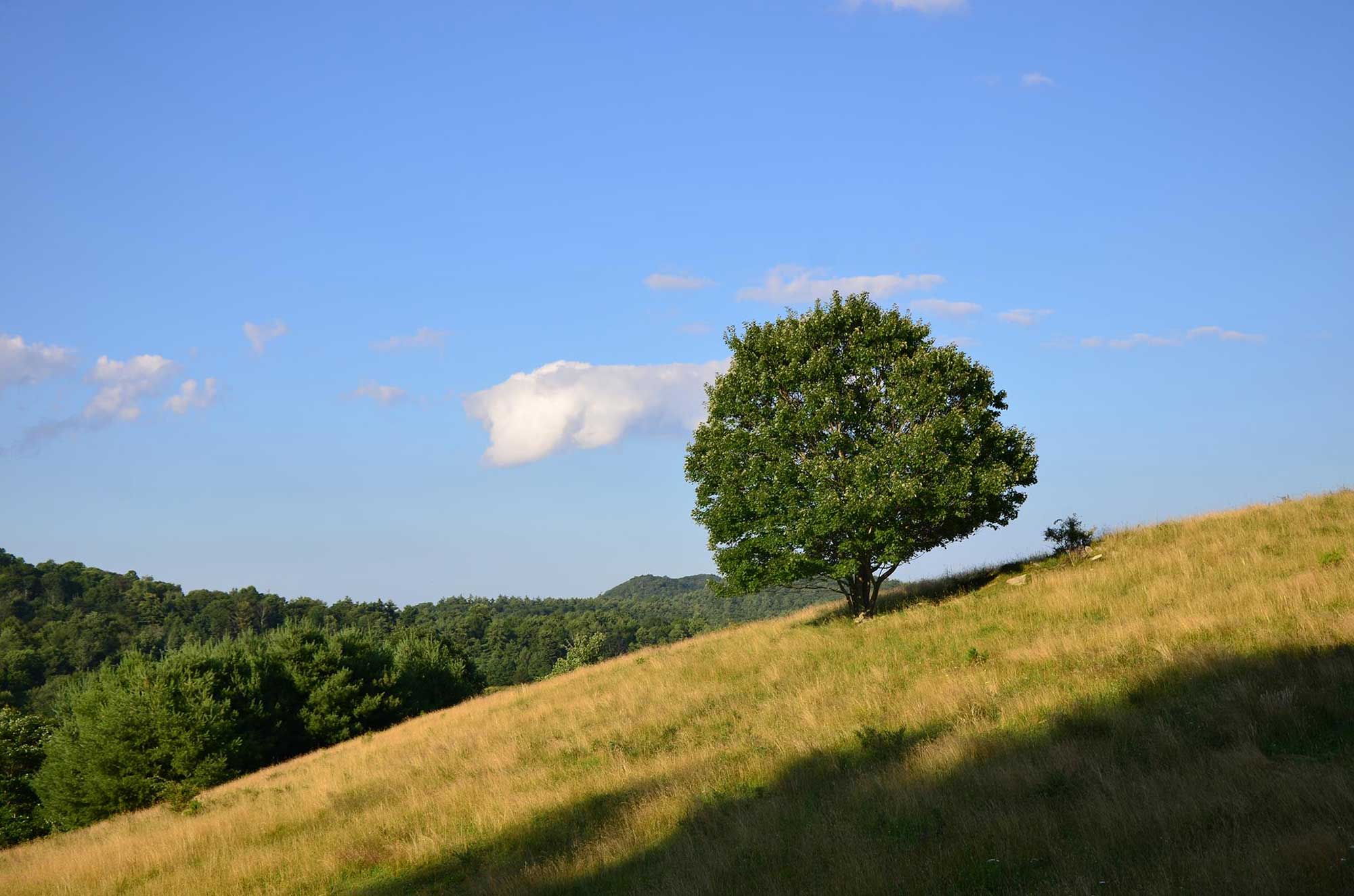 The parkway stretches through the Blue Ridge Mountains for 469 miles and connects Shenandoah National Park to to the Great Smoky Mountains National Park.

After we left the park, we drove along the parkway for about 50 miles until the sun set.

Shenandoah National Park is a favorite for many people. High up in the mountains, it is only about 75 miles from Washington, D.C., and not far from other large cities on the East Coast.

I love to study the hill culture of the Appalachian people. Being from Arkansas, our history is similar. So Shenandoah National Park and Great Smoky Mountain National Park have a familiarity to me that I love. 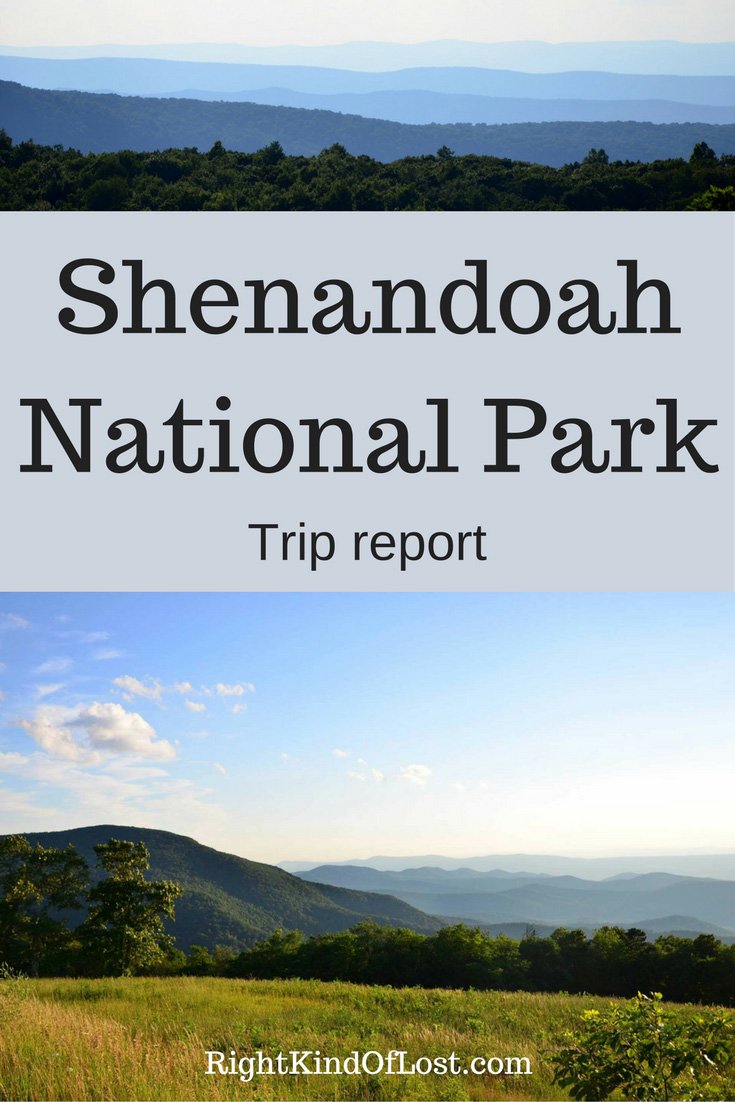