Misadventures: If I survive this I’ll have a great story 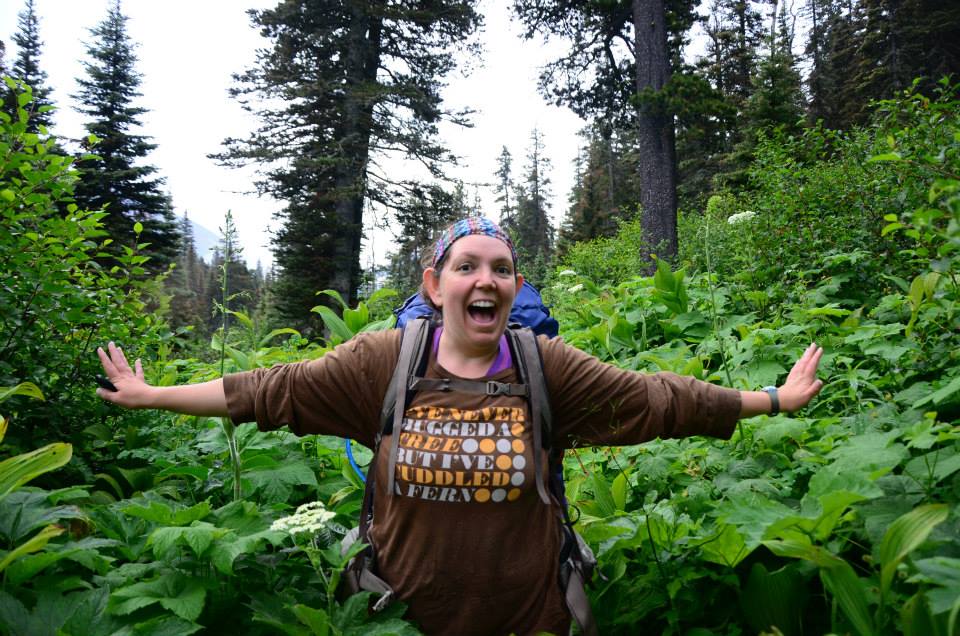 Misadventures and five times I’ve thought, “If I survive this, I’ll have one heck of a story to tell.”

Sometimes things don’t go so well while you are out enjoying nature. Sometimes things go drastically bad. And, yeah, there are times I think “If I survive this, I’ll have one heck of a story to tell.”

It’s these times that we lovingly look back on as misadventures. But not during the moment of these misadventures. While we are experiencing misadventures, we think we are going freeze to death, get eaten by a bear, killed by a crazy person, or wherever else our minds go. These non-pleasant thoughts are what put the “mis” into our adventures.

Sleeping in the car with the bear

In North Carolina, Crystal and I had to sleep in the car one night because the gate to Mount Mitchell State Park was locked. A wreck on the interstate somewhere in Tennessee left Crystal and me sitting on the highway for more than four hours. Because of this, we did not make it to the state park until about midnight. 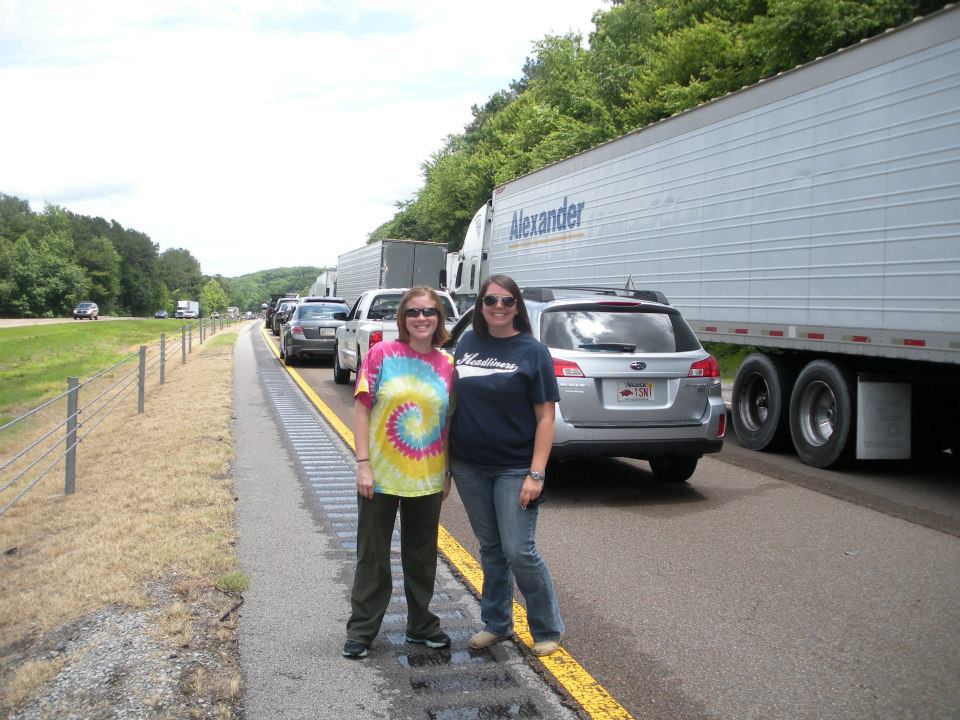 Just before we got to the park entrance and gate, we saw a black bear moseying around.

It was raining – not pouring, but a fine, blowing mist that gets everything wet. So when we pulled up to the park and found the gate locked, I was not too upset when Crystal suggested just to sleep in the car outside the gate. 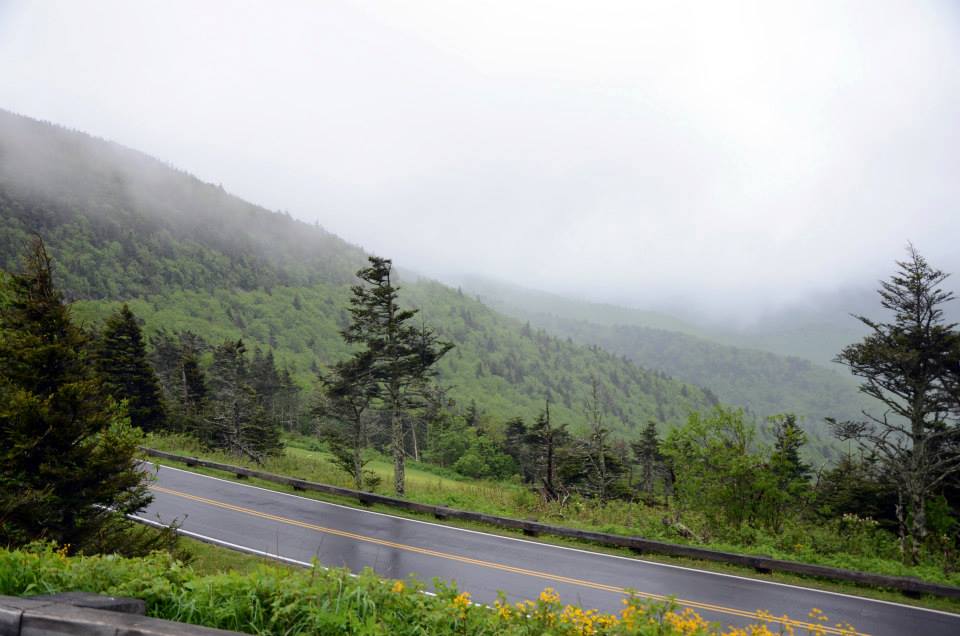 I couldn’t sleep. Then Crystal got sick and vomited out her door. We were both so tired, we just drove the car up about 20 feet. That way if it attracted the bear we would at least be a little further away.

The next morning the park ranger came and woke us up. We told him what happened, and I asked about the bear. He just said, “I know that bear,” but didn’t show concern. So I guess Crystal was right.

My It’s Not Just Bears to Worry About post goes into more detail about this experience. But it also fits in here too, so I’ll include a shorter version.

Lagena and I camped for three nights at Yellowstone National Park. On the second night we encountered the man who I call “The Crazy Dunk Man.” He stared creeping me out when he hollered at us about a buffalo in our campground. “Heeey ladies! Did you see the big fella over there?” he asked. It was the way he said “Heeey ladies!” that I didn’t like. 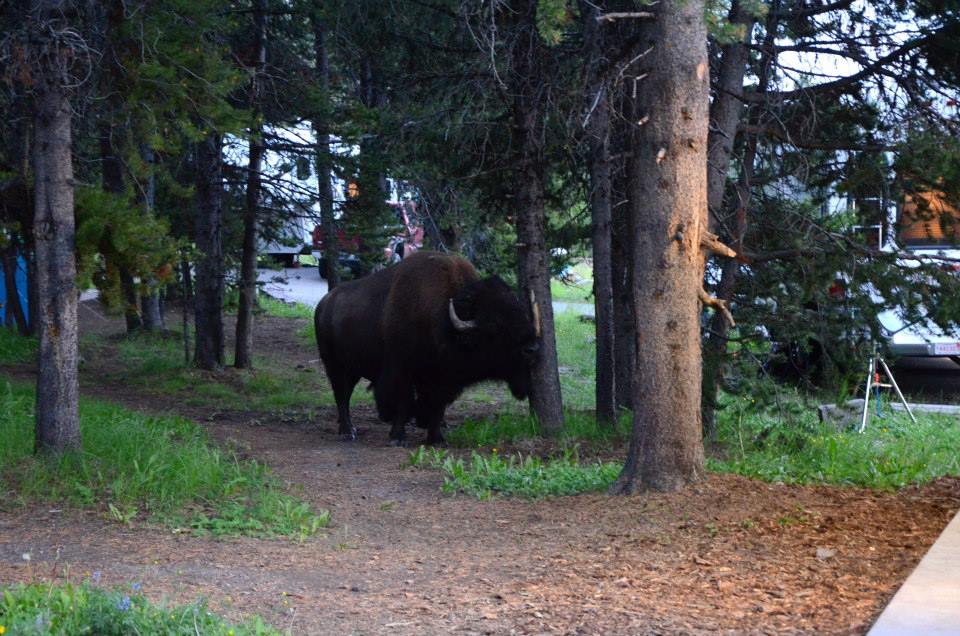 He made friends with an Asian family the next campsite over. His questions became too intimate for the 14-year-old boy he was talking to. “You mean you’re still a virgin! Hell, I fathered a child by the time I was 14.”

Then because he, the woman who was with him, and the Asian family were playing music loudly, another man yelled angrily at them to turn it off.

As the night progressed, “The Crazy Drunk Man” got more drunk. Everyone else went to bed, but the man and woman were still up. Lagena and I, and I’m sure all the other campers, couldn’t sleep because we had to listen to his blubbering. We then heard him say he wanted to shoot the man who yelled.

Fortunately the woman calmed him down and we did not witness a murder.

Sleeping in the bathroom during the storm

My brother, Jacob, and I did a backpacking trip over Christmas break. Jacob is a teacher. We had plans to hike in a rugged and remote area, but the weather forecast was calling for storms – not just rain, but storms. Jacob and I decide it would be a wise idea to change locations to someplace where we could seek shelter if needed. 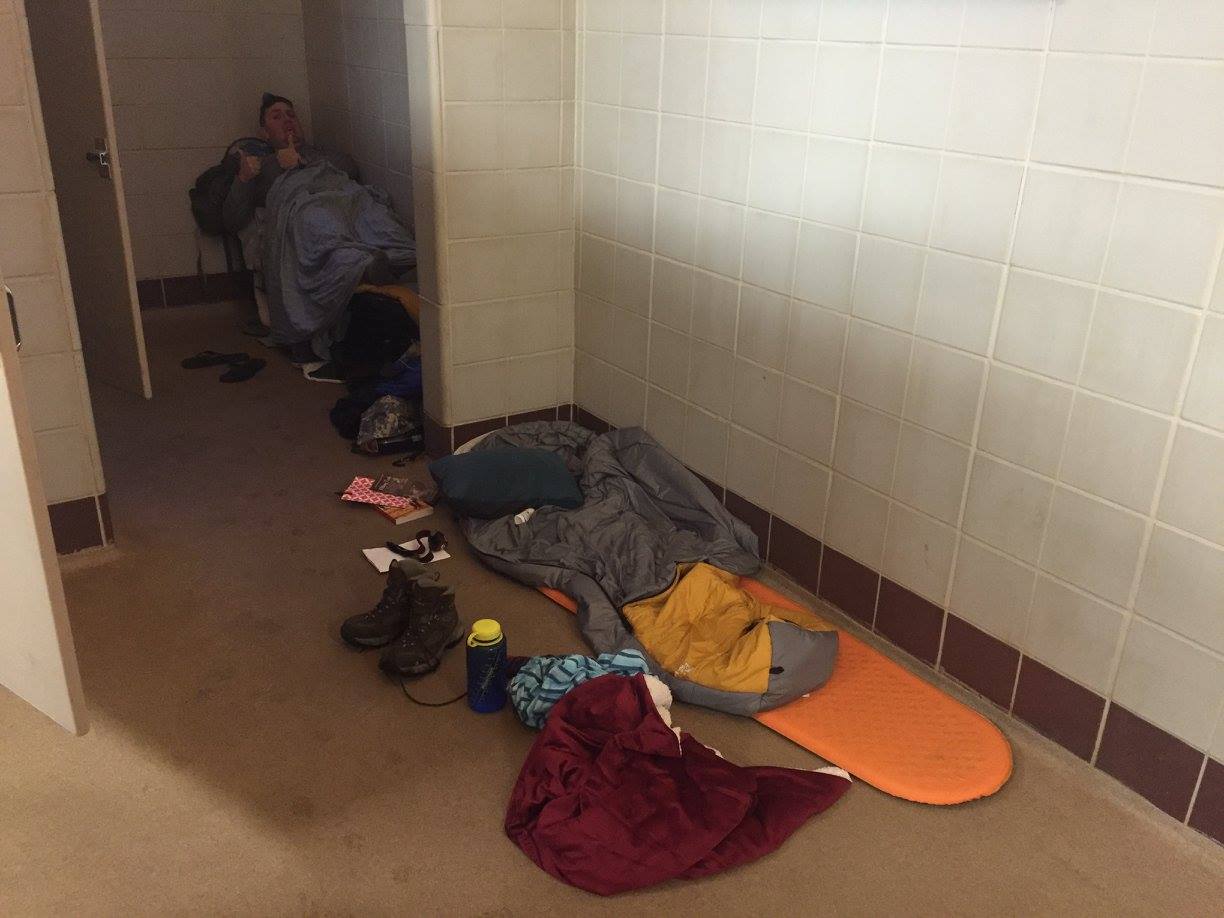 We chose to hike Mount Magazine, Arkansas’ highest point. At the top is a state park, so we would be able to take shelter in a bathroom on our second night if the storms came. And they did, all night long.

We spent the entire night sleeping in the men’s bathroom. And we were glad we did because the next morning there were trees down in the park. A tent and a hammock are not places you want to be when trees are falling.

On the positive side, the bathroom was warm and toasty.

Hiking in soaked clothes in January

OK, it wasn’t that cold on this January day, but the thought of hypothermia did cross my mind. Zach and I went hiking in the Ouachita National Forest on New Years Day. We wanted to start the new year off right. Well I started it off by falling into the creek about a fourth of a mile into the hike. 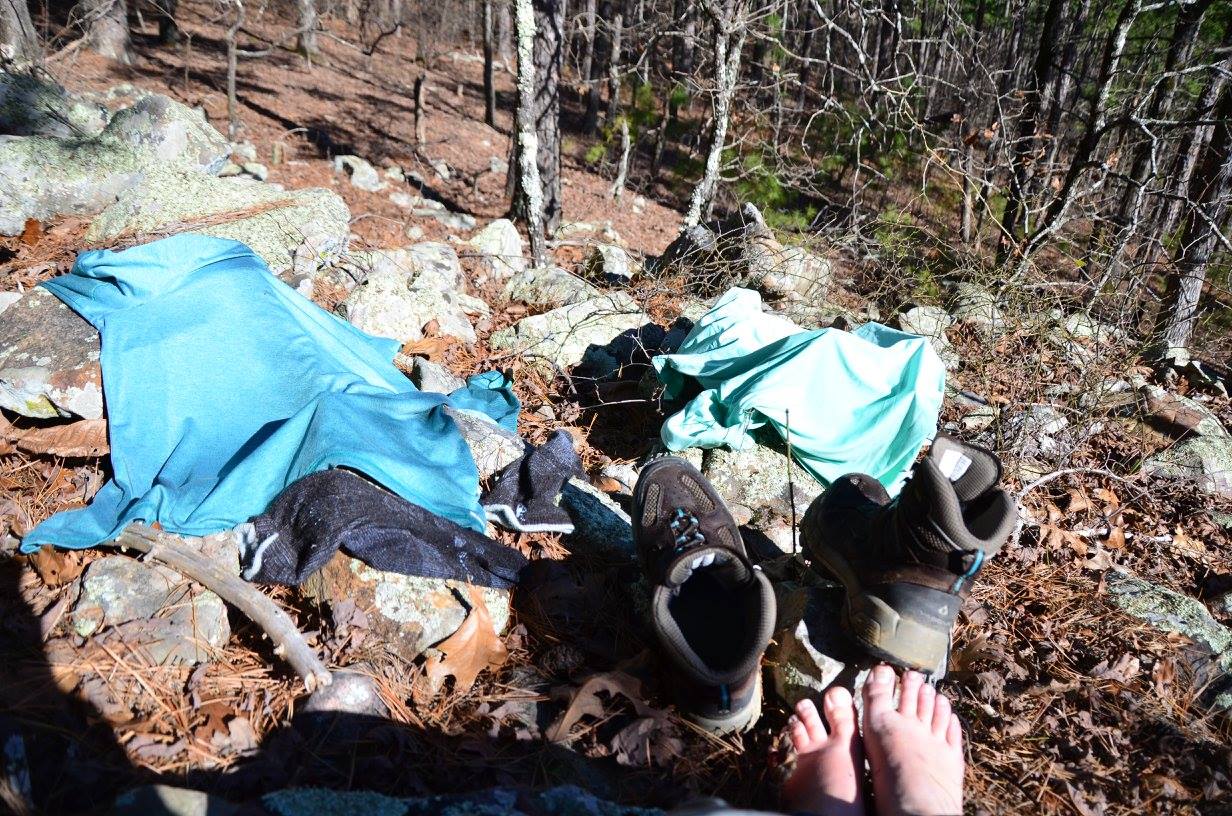 Everything was soaked. I literally poured water out of my boots – which I was carrying across the creek because I didn’t want them to get wet. My backpack even got a little wet. Fortunately I had a dry fleece sweater in my pack to put on, and I tied the two shirts that got wet to the back of my pack. I just hiked the rest of the way in wet socks and pants.

On our lunch break I laid my shirts, socks, and boots in the sun to dry.

Fortunately I was mostly dry by the time we finished lunch and never really got too cold.

Well that’s a bit of an exaggeration, but I did have a mini-freakout that we would. Lagena and I packed for a three-day trek in the backcountry of Olympic National Park. It was raining so we packed in a hurry. We got about a half of a mile down the trail when we realized we didn’t make our peanut butter and jelly sandwiches for lunches.

We looked at each other and discussed going back but decided, “nah, we’d be good.” We brought granola bars, we reasoned. 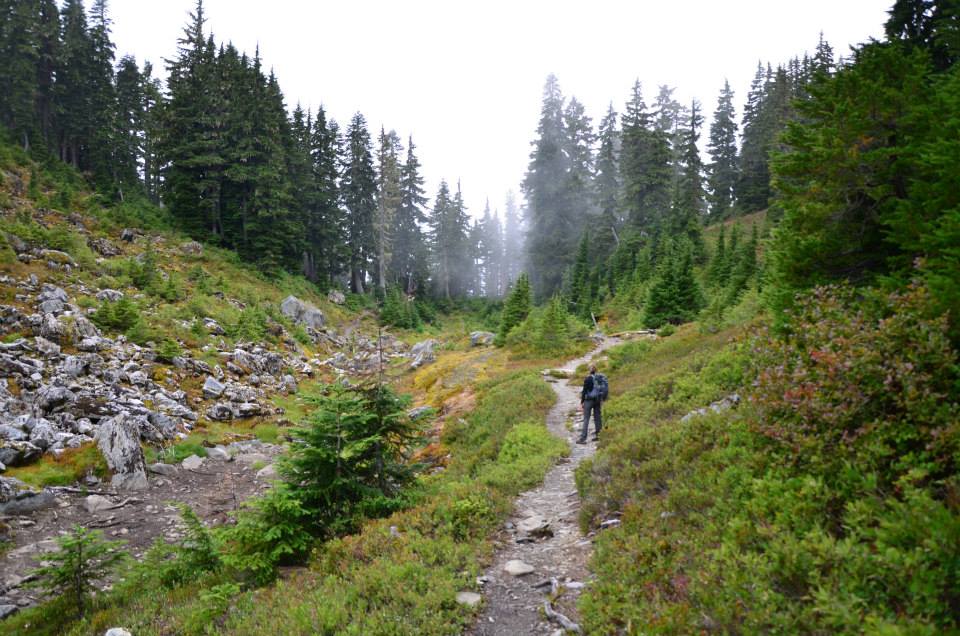 That night I woke up in the middle of the night freaking out because I thought we did not bring enough calories. I worried the granola bars were our breakfast, and therefore we wouldn’t have enough for lunch. But I forgot we also brought oatmeal.

On our second day of the hike, we only ate oatmeal for breakfast, a granola bar and fruit cup for lunch, and Mountain House meal for supper. It was not enough calories for backpacking 14 miles, but we did not starve.

Things that go awry always help us to be better prepared the next time. And most of my misadventures show me that, no, I’m not going to die in the wilderness. Discomfort yes, but not perish. It is always smart to be as prepared as possible and plan for the unexpected.

6 thoughts on “Misadventures: If I survive this I’ll have a great story”